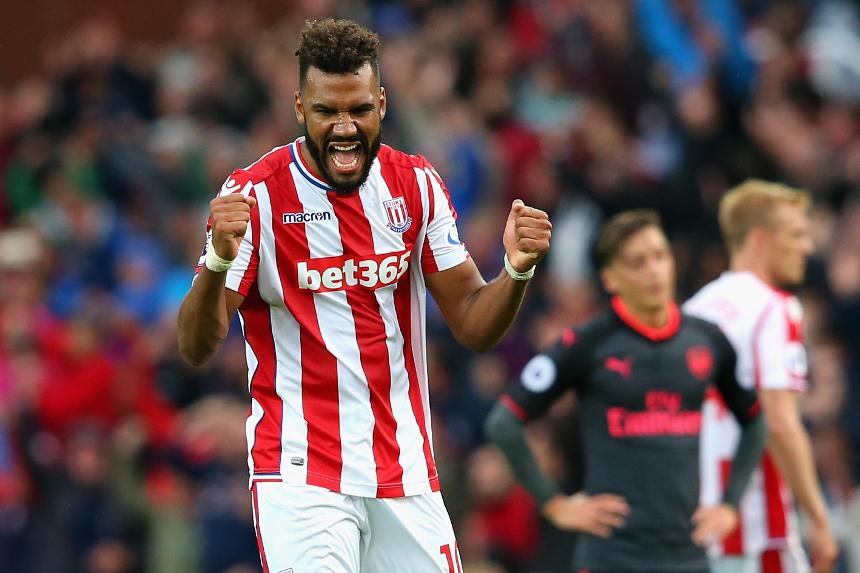 In the third of a five-part series on players who have made an early mark in 2017/18, Adrian Clarke analyses  Stoke City's versatile Cameroonian.

Eric Maxim Choupo-Moting is not the most refined footballer you will ever see. But he brings a “chaos factor” to the Stoke City attack that has altered the dynamics of their forward line, writes Adrian Clarke.

Capable of playing on either wing, in behind a front man, or leading the line, the Cameroonian provides manager Mark Hughes with the option to mix his configurations in attack.

No matter which role he is asked to perform, Choupo-Moting’s unpredictable movement and running power makes Stoke a more dangerous counter-attacking team than in 2016/17.

As a centre-forward, the 28-year-old is elusive for defenders to pick up.

Rarely standing still, he will drift wide or deep, in search of space to receive a pass or to alter the angle of his runs to escape his markers.

Some of his best moments have come when he has dropped short, only to spin in behind his opponents.

While there is undoubted quality to Choupo-Moting’s technique – his one-touch nutmeg pass to release Xherdan Shaqiri for his goal against Leicester City was sublime – he still remains a little rough around the edges.

Only one of his 16 crosses has reached a team-mate and despite averaging three shots per match, a brace at home to Manchester United remains his only goals to date.

Stoke’s search for a regular centre-forward appears to be ongoing, but over the last few weeks Choupo-Moting has done a fine job of leading the line.

If Hughes, a former striker of great repute, can work with Choupo-Moting to improve his finishing, then the player signed from Schalke in the summer will surely shoot up the goalscoring charts.

Inside the final third, especially on breakaways, he makes things happen.

Part 1: Tough-tackling Gomez a star in the making
Part 2: How Fernandinho holds Man City together
Part 4: Winks a gem at the heart of Spurs midfield
Part 5: Duffy heading Brighton clear of danger