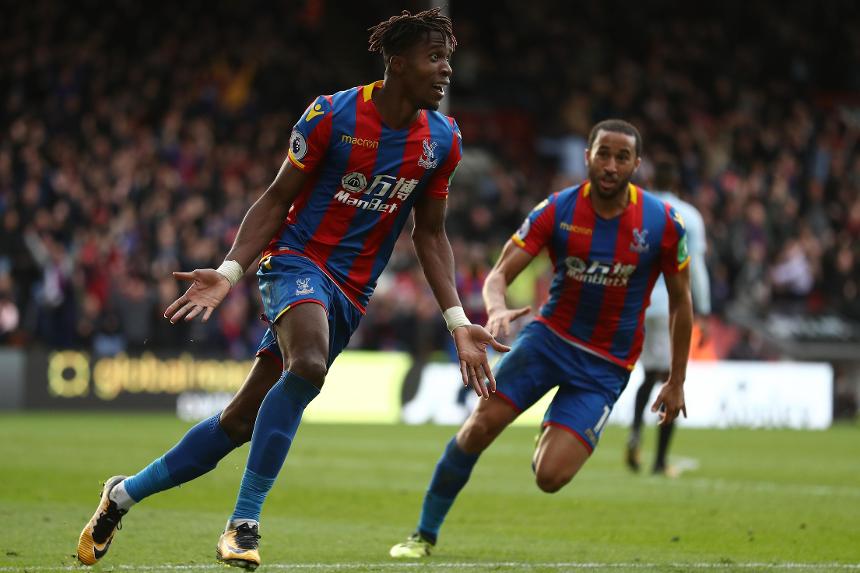 Tottenham Hotspur have beaten Crystal Palace in each of their last four Premier League encounters but Wembley Stadium's large playing surface could play into the Eagles' hands on Sunday, according to Adrian Clarke.

If Palace manager Roy Hodgson could extend the length and width of the Selhurst Park pitch, I suspect he would jump at the opportunity.

Wilfried Zaha, Andros Townsend and Ruben Loftus-Cheek all love running with the ball at their feet, and for athletic players of their ilk, bigger fields of play are advantageous.

The reasons are straightforward.

On larger-than-average pitches, defenders find it tougher to get tight enough to slow the attackers down, and from the speedy dribblers' perspective, the more space they have to run into, the easier it is to shine.

Wembley's pitch dimensions are four metres longer and one metre wider than Palace's home ground, while White Hart Lane was another one metre shorter and narrower than that.

So ahead of Sunday's contest, Zaha and his team-mates will be rubbing their hands in anticipation of a surface that, in theory at least, should suit their strengths.

While Spurs will start as favourites, their manager Mauricio Pochettino will be wary of the threat posed by Palace's exciting runners, all of whom feature among the PL's best dribblers.

In terms of form, the fit-again Zaha is the player who most stands out.

Last weekend the Ivory Coast international scored a memorable stoppage-time equaliser against West Ham United and it was the least he deserved for another impressive showing.

He had six efforts on goal and burst into the penalty area on numerous occasions.

For a player who made only 14 passes in that contest, he was incredibly penetrative inside the area, just as he was when scoring against Chelsea last month too.

Pace down the sides

In the absence of Christian Benteke, Hodgson has reverted to a standard 4-4-2, but his use of two natural wingers, Zaha and Townsend, as his front men has been fascinating to watch.

The main feature of their play during the last three PL matches has been the vibrancy of their movement.

Mixing up their game by coming short, and spinning into the wide areas, the pair have proven elusive from their markers.

Townsend is an excellent crosser of the ball, while the explosive power and pace of Zaha worries defenders most. Together, the blend has worked pretty well.

Whenever the Eagles recover possession at Wembley Stadium I expect them to try to pick out Zaha in the channels early.

While the makeshift striker will be happy to run at any member of the Spurs defence, his eye will be on spinning into the space behind the right wing-back. It’s an area of the pitch he particularly revels in.

Once there, instead of facing the injured Toby Alderweireld in a 1v1, he will most likely encounter Eric Dier.

The England defender is quicker than the absent Belgian, but has a large physical frame that is not especially well suited to having to twist and turn at speed.

Zaha’s blistering pace and trickery could be too much for Dier, if he is allowed the space to run at him.

In terms of speed the Crystal Palace star has the legs on all of the Spurs rearguard, so wherever he picks up the ball he will pose a serious threat.

Hodgson will need every player to be on top of their game to compete in this fixture but you sense it is his speedy attackers who could hold the key to success.

If Palace can get Zaha, Townsend and Loftus-Cheek running at the Spurs rearguard, things could get interesting.

Part 3: Morata v Lukaku: Who will shine at Stamford Bridge?