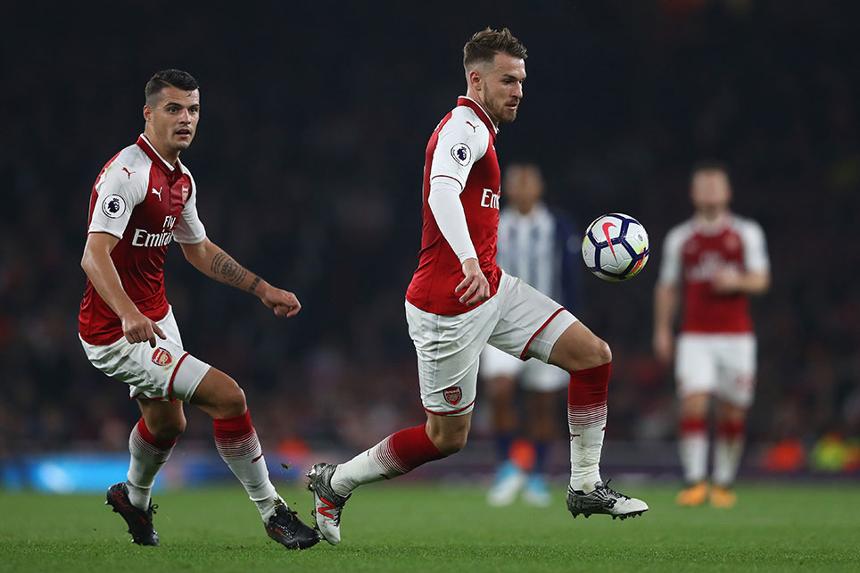 Arsenal travel to Everton in need of a morale-boosting away victory but these have been hard to come by of late.

While a combination of factors are behind this, the central midfield has underperformed.

Failing to dominate matches outside north London, the Gunners' midfield has looked short of ideas and defensive resolve, which have contributed to Arsene Wenger's men losing control of testing away fixtures.

Granit Xhaka is the only Arsenal central midfielder to create a chance across their first four away matches this term.

The Swiss has registered one key pass in each encounter, three of which have stemmed from open play.

That means Aaron Ramsey, Mohamed Elneny and Francis Coquelin have not yet teed up a team-mate for a chance in an away match.

By Arsenal's standards the passing from midfield has been ordinary.

Wenger will be looking for more drive, creativity and desire to link up with forwards in advanced areas.

His midfield has not contributed enough attacking quality, which has affected the influence of Arsenal's strikers on the road.

With the ball not moving quickly enough, or without any real penetration through the lines, Alexandre Lacazette has been starved of service, registering only three shots on goal.

Contrast that with the 13 attempts on home turf the Frenchman has mustered.

While it's not solely down to Xhaka and Ramsey to supply chances, they should be conjuring significantly more decisive moments inside the final third.

Arsenal have also been too loose in away matches.

Ceding possession in bad areas of the field exposed holes in their midfield for goals scored by Stoke City and Liverpool.

In general there have been too many spells where this unit has sat back and allowed the hosts to take the initiative, as Watford did during the second half at Vicarage Road last weekend.

The exception was at Chelsea, when Xhaka and Ramsey protected the defence very well.

That day they made seven tackles and five interceptions as a pair during the 0-0 draw.

On the other three road trips, the pair have not imposed themselves in the same way.

The numbers tell us that Arsenal's central midfield has not been difficult enough to play against.

At Goodison Park on Sunday they must be more compact and dynamic.

If they aren't, a fired-up Everton side could push Arsenal back and make them pay.

Wenger can probably find fault with most areas of his team when he analyses their away form.

But until his central midfield starts to take a firm grip of matches, like they used to, Arsenal will always run the risk of dropping points.

Part 1: How West Ham can get best out of Chicharito