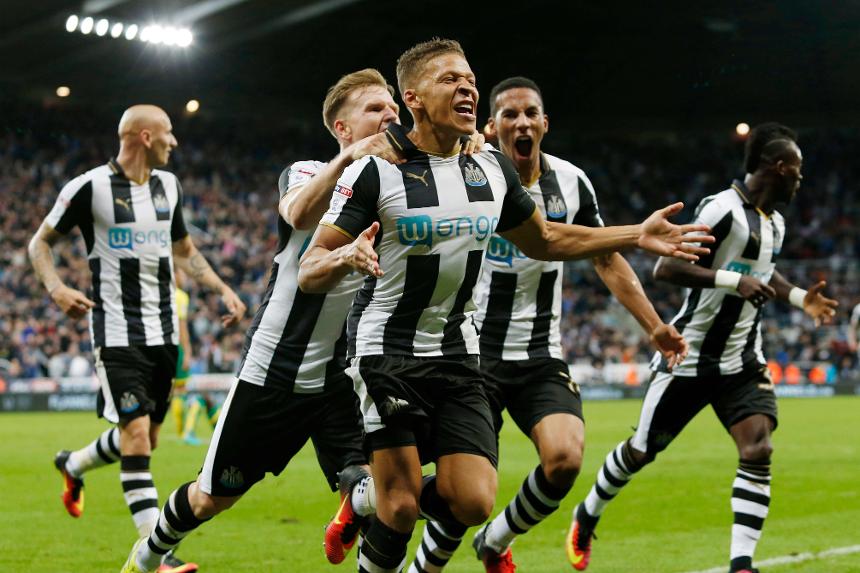 Adrian Clarke’s analysis of the promoted clubs concludes with one final look at Newcastle United.

After focusing on their set-piece threat and Rafa Benitez's management style, Clarke examines the Magpies' very own Ian Wright.

Wearing the iconic No 9 shirt for Newcastle United is an honour that brings with it great responsibility,

Dwight Gayle has thrived under the pressure.

He scored 23 Championship goals from 28 starts during a fabulous debut campaign at St James’ Park.

The former Crystal Palace striker was often used as a substitute or in a wide attacking role during his Selhurst Park days, but Benitez saw him as a centre-forward capable of leading the line.

It was the right decision.

Playing on the shoulder of defenders, Gayle’s speed and energy stretches play and opens up additional room for team-mates.

Using his pace to full advantage, six of Gayle’s 23 goals stemmed from runs he made in beyond his markers, latching on to through-balls to score.

With midfield distributors such as Jonjo Shelvey, Matt Ritchie and Mohamed Diame supplying the ammunition, Gayle was always a livewire threat.

The Newcastle striker is also an instinctive finisher who scores a wide range of goals.

Last term he shared 19 strikes between his left (nine) and right feet (10), dispatching clinical efforts one-touch, two-touch, or on the back of dribbles.

While he is confident enough to take on efforts from distance, Gayle is probably best described as a six-yard box predator.

Whenever the ball is out wide the 26-year-old makes razor sharp runs, and that is the key ingredient behind his success.

Mixing his runs up between near post, far post and central areas, Gayle’s bright mind and sharpness over three or four yards means he offers terrific options to Newcastle’s creators.

Statistically he is far better at attacking deliveries from the right wing.

He got on the end of eight crosses from that flank to score, compared with two from the left, but this may have been down to the quality of service.

Can Gayle cut it in the Premier League? I believe he can.

A player who demonstrated excellent finishing in short bursts with Crystal Palace, he registered conversion rates of 17%, 25% and 35% during his last three top-flight seasons at Selhurst Park.

This is even more impressive considering that many of his appearances came from the bench.

Now deployed as the principle striker rather than as a winger, he should in theory receive goal opportunities in better areas on a more consistent basis.

His energetic style is extremely similar to the Arsenal legend. The runs he makes are of the same ilk and they lemd themselves to a diverse assortment of goals.

Given the right service I am sure Gayle will score plenty of goals for Newcastle United next season.