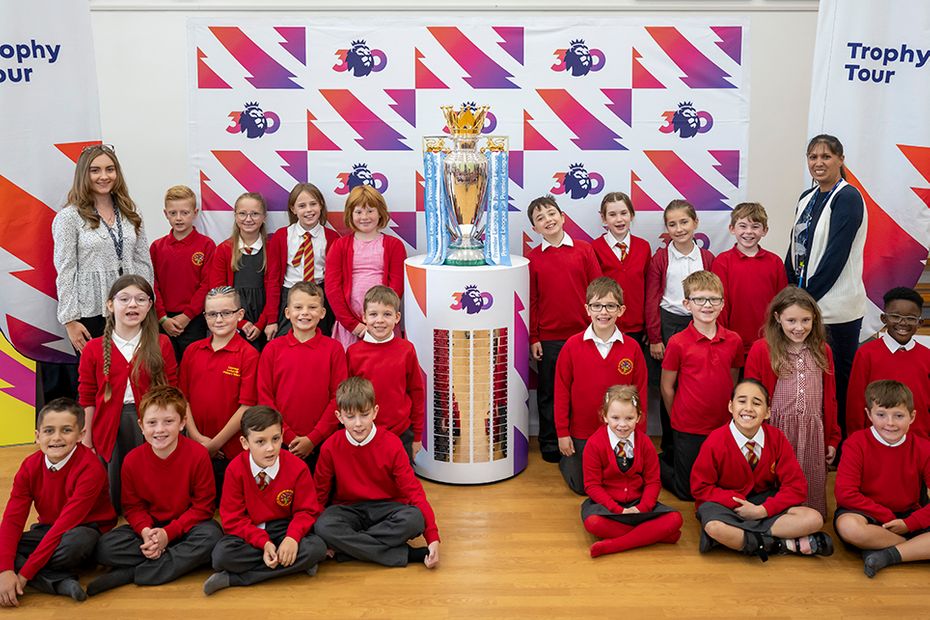 The Premier League Trophy has visited three sites in Wales as part of a nationwide Trophy Tour as the competition marks its 30-Year anniversary.

See: PL30: How Swansea are using football to inspire students

The recipients were presented with a special captain's armband and pennant beside the Premier League Trophy. Plaques engraved with their names were also added to the trophy plinth.

The three clubs receive more than £1,500,000 collectively in funding from the Premier League each year to deliver community schemes and improve facilities via their charitable foundations. Across the last 10 years, the sum has totalled more than £10million.

Former Swans striker Trundle has been an ambassador for the Swansea City Foundation for nine years and has recently become a trustee, owing to his commitment to his work. He has been an ever-present presence, raising awareness and supporting outreach within the community, even volunteering to pack Christmas hampers.

Ashley Williams, who captained Wales to the UEFA Euro 2016 semi-finals and made 241 Premier League appearances, visited Pontardulais Comprehensive School in Swansea to surprise Trundle with his Community Captain award.

The presentation occurred in front of a group of pupils participating in the Premier League Inspires programme, designed to help people aged 11-25 to develop personal skills and positive attitudes and fulfil their potential.

"Being a captain is about taking responsibility, showing leadership and inspiring others to be the best they can. So I congratulate Greg, Danielle and Lee on their deserved recognition," Williams said.

"From a Welsh perspective, the Premier League is doing a great job. It is not forgetting about Wales or clubs that aren’t playing in the division. Bringing the trophy out to schools for pupils and staff to see it is inspiring and the funding it provides helps to bridge the gap between the players you see on TV and all these communities in the UK."

Over 1,000 Welsh primary schools use Premier League Primary Stars resources designed to use the appeal of football to engage children in lessons including PE and maths, with Foundation staff also supporting teachers in schools.

Seivwright was selected as Newport County's Community Captain in recognition of her fundraising, voluntary work, and diligent trusteeship of County in the Community, the club's charitable foundation.

A special assembly was hosted at Caerleon Lodge Hill Primary School, with the school selected after an Under-11s girls team had won a national Premier League Primary Stars tournament, held in Watford in May.

"County in the Community works with people across the whole of South-East Wales right from the age of three through Soccer Tots to 83-year-olds playing Walking Football," Seivwright said.

"The funding from the Premier League helps us as a charity to continue our delivery and inspire even more people."

Youngsters getting opportunities in Cardiff

Morgan, Manager for Blaenau Gwent Youth Service, was recognised for his work in partnering with the Cardiff City Foundation to establish and deliver PL Kicks sessions in Ebbw Vale, Gwent, since 2017.

Foundation director Gavin Hawkey and head of communities Zac Lyndon-Jones made the presentation at Cardiff House of Sport.

"My job is to provide opportunities for young people," Morgan said. "We know they love football and bringing the excitement of the Premier League to Ebbw Vale, a small village in Wales, has helped us to keep young people engaged in playing football in a positive environment.

"We have quality 3G pitches which they otherwise may not have access to."

This is part of the League’s annual investment into community and football projects in England and Wales - the highest voluntary financial contribution of any sports league in the world.

Since the 1998/99 season, the League has invested £2.2bn in charitable projects, wider football support and good causes. Over the next three years, £400m of funding has been committed for community facilities, community and education programmes.