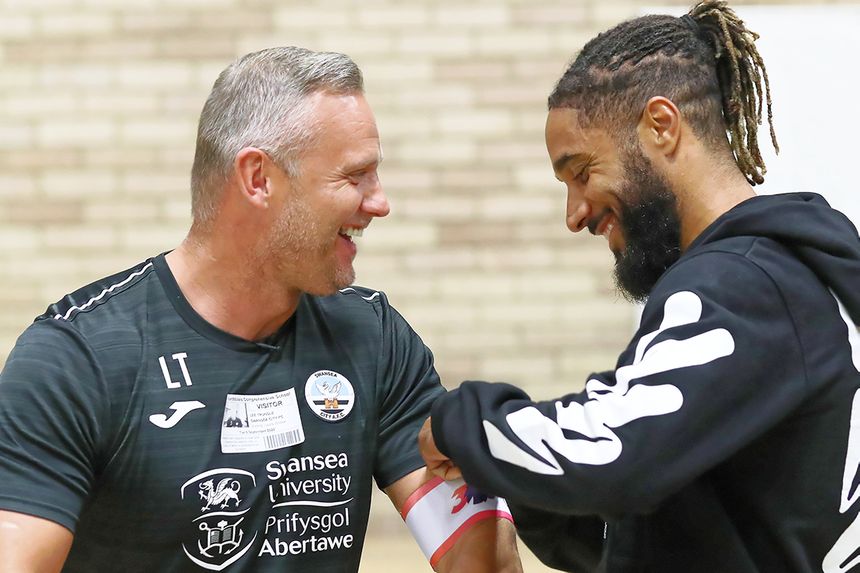 There is an audible marvel from the Pontarddulais Comprehensive School schoolkids as they file into the sports hall in Swansea.

This leg of the tour celebrates the contributions of Swansea City's community work with the Premier League Inspires programme.

One person in particular, Lee Trundle, is being celebrated. The former Swansea striker has been named the club's Community Captain for his role as club ambassador at the Swansea City Foundation.

After being surprised with the award by another Swansea legend, Ashley Williams, Trundle talks to me about the importance of being involved within the community after a career as a professional player.

"Once you're off the football field, you can really make an impact in people's lives, whether it's for an adult going through a hard time, or a child you can spark something in them," he says.

Trundle's role is part of a wider framework of incredible people working with the help of the Premier League to contribute to the bettering of young people's lives, not just just in Swansea but throughout Wales and in England too.

He paints a picture of how PL Inspires has proven beneficial for students at Pontarddulais Comprehensive School and beyond.

"Every young kid growing up watches the Premier League, it's the best league in the world, so to be associated with that and go into schools - it gives us a bit more to work with."

There is a continual emphasis across the teaching staff on how the programme has inspired, instilling resilience along with a focus on wellbeing and mental health.

Head of Year 10, Laura Wilcox and headteacher Gareth Rees speak about how the program has offered a rewarding experience for pupils while reinstating important values necessary for their development.

"The values and ethos of the program align closely with the schools and it's great for the pupils to gain new experiences," Rees says.

There are a multitude of experiences students have had that I hear about, such as a visit to the Swansea stadium, opportunities to see all the facilities as well as the creation of a social action project that led to some of the students travelling to Watford's Vicarage Road after winning a regional competition. Opportunities that would normally be beyond most of them.

Rees explains about how the program has brought a diverse range of pupils together.

"Coming out of a pandemic, where some pupils have found it hard to reintegrate and mix with friends again, this programme has helped them work within teams and been invaluable for their self-esteem," he says.

With the growing relationship between the school and the Swansea City Foundation, it is a massive testament to the power that football has to help supplement and support their local communities.

Listening to Williams, his points about the importance of connecting community through sport ring true.

It is a process that continues to bear fruit, and Pontarddulais Comprehensive is one of several examples of that.

So even as the Premier League Trophy departs South Wales for the next step of its tour, its presence in the minds of the children who attended will remain as will its influence, along with that of the Premier League, to enact change in the communities that cherish it.