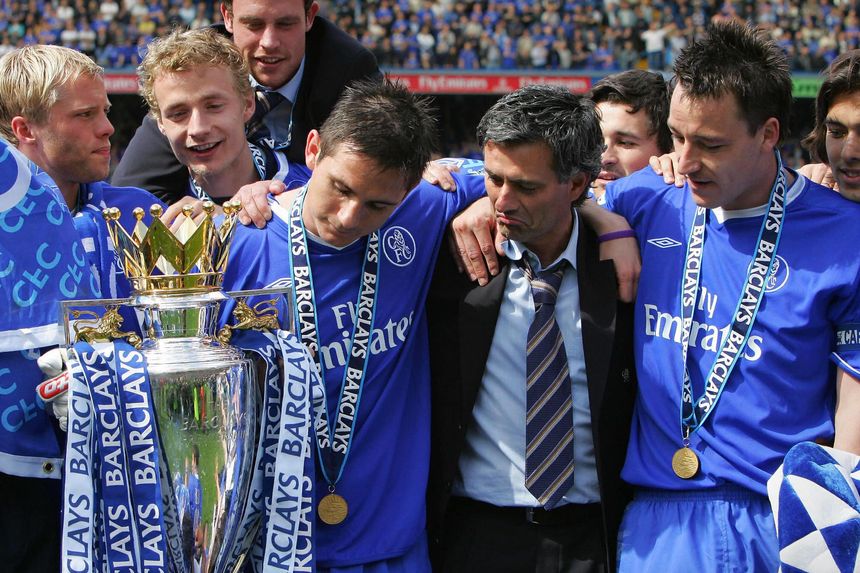 Adrian Clarke looks at the players and managers who made a big impact as part of the Premier League's 30th anniversary celebrations.

Chelsea's 2004/05 title-winning side was unquestionably one of greatest in Premier League history.

Claiming 95 points under the self-professed "Special One" in his first season at Stamford Bridge, The Blues were a winning machine.

That team recorded two impressive milestones which still stand to this day.

Mourinho's first Chelsea side conceded only 15 goals all season, including a paltry six at home.

This helped them amass 25 clean sheets, a tally that is yet to be broken by another Premier League team.

In the season that preceded their first Premier League triumph, Chelsea had primarily deployed a 4-4-2, the most popular shape in English football at the time.

From that moment, the Blues never looked back.

In that set-up defensive midfielder Claude Makelele came into his own as the sole pivot, and with a midfield trio in place, Chelsea regularly outnumbered rival teams in that domain.

And in goal was another impressive newcomer who joined that summer, Petr Cech.

When called upon, Cech was exceptionally reliable, boasting an 87.3 per cent save percentage; 6.2 per cent ahead of the next-closest stopper, Brad Friedel.

Well-protected by a great defensive spine though, Chelsea faced the joint-fewest shots on target (83) since records began in 2003/04.

Mourinho built his tactical approach around a formidable defensive core, but he also worked hard to ensure his 4-3-3 was one of the most robust ever seen in English football.

Rarely opened up, the Blues often deliberately soaked up pressure before hurting opponents on the counter.

On those transitions and breakaways, flying wingers Damien Duff and newcomer Arjen Robben were quick, direct, and lethal.

Robben scored seven goals and made nine assists in only 14 starts, while Duff chipped in with six goals and seven assists.

Given more freedom to play his natural attacking game than he had been in a pair, Lampard netted 13 goals and was the division’s top assist provider with 18.

Their mobility and link play knitted the side together and they each chipped in with plenty of goals and assists too.

Robben’s 1.14 goals or assists per 90 minutes ranked him second in the Premier League, behind legendary Arsenal forward Thierry Henry.

This brilliant Chelsea side were ruthless and efficient.

Between December 2004 and February 2005, they kept 10 successive clean sheets, a sign of the discipline Mourinho had instilled in his players.

Once in the lead, it was usually game over.

This Chelsea team dropped points from 1-0 up just once all season, when Bolton Wanderers fought back to earn a 2-2 draw at Stamford Bridge.

Tactically astute and exceptionally well-drilled, Chelsea were beaten only once in the entire campaign.

Considering he had inherited a team that had lost seven matches the previous season, Mourinho's impact was staggering.