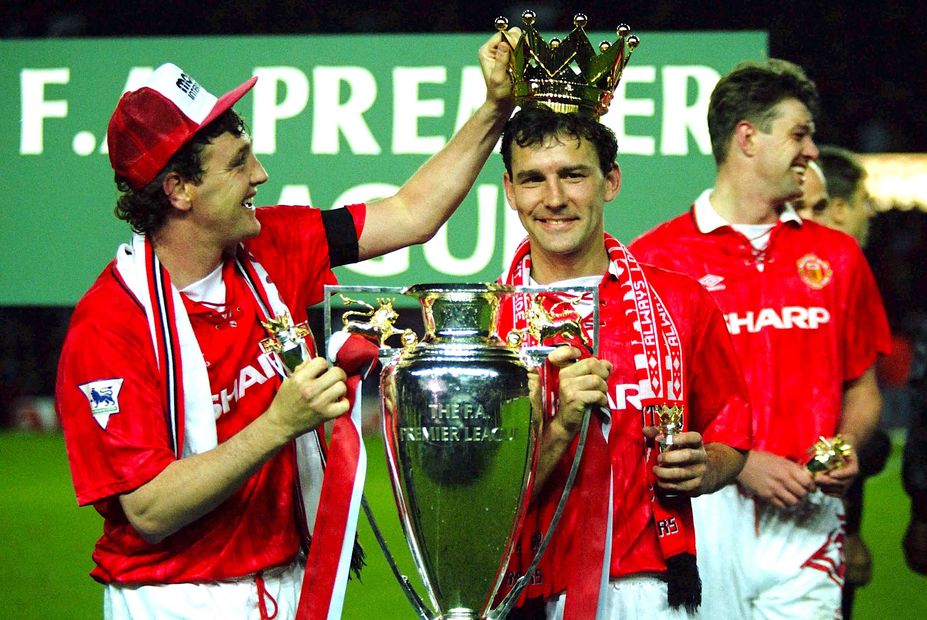 From starring on the big screen to becoming professional golfers, find out what they've done since

A wait of 26 years for a top-flight English league title was ended for Manchester United as they became the inaugural Premier League champions in 1992/93.

That first title success for Sir Alex Ferguson opened the floodgates for an unprecedented period of success for the Red Devils that stretched over three decades.

Now 30 years on from that history-making season, we take a look at what the members of that famous squad have been up to since.

Schmeichel ended his United career in 1998/99, winning a Premier League, FA Cup and UEFA Champions League treble in his final season. After two years at Sporting Lisbon, the Denmark goalkeeper returned to England with Aston Villa before finishing his career at Manchester City.

Since his retirement in April 2003, Schmeichel has mostly worked as a television pundit and also appeared as a contestant on the 2006 edition of Strictly Come Dancing. He is a Global Ambassador for Man Utd.

Irwin’s consistency and dependability for Man Utd is legendary - in each season at the club bar two between 1990 and 2000, he played over 40 matches.

He joined boyhood club Wolverhampton Wanderers after 328 Premier League appearances for United, in which he recorded 123 clean sheets and scored 18 goals. He helped Wolves achieve promotion to the top flight before hanging up his boots in 2004.

Since then, the 54-year-old has appeared as a pundit for MUTV and works as an ambassador for United. He is also a columnist with Ireland's Sunday World newspaper.

After leaving Old Trafford in the summer of 1995, the two-time Premier League winner had spells at Fulham and Chelsea. He retired in 1997 after dropping into non-league with Farnborough Town.

Parker earned his coaching badges and managed both Chelmsford City and Welling United, before moving to Singapore as technical director of JSSL Arsenal before returning to the UK. He is now a regular media pundit and most recently completed the London to Amsterdam bike ride raising funds for Prostate Cancer UK.

The centre-back left Old Trafford in 1996 and continued playing at Birmingham City and then Sheffield United, retiring at the end of the 1998/99 season after a career spanning 737 appearances and 81 goals.

Bruce is currently in charge of Championship club West Bromwich Albion, having held 11 other managerial positions in the last two decades, most recently in the Premier League at Newcastle United.

Pallister returned to former club Middlesbrough in 1998 as a four-time Premier League winner. After three years at the Riverside, he retired in July 2001 aged 36 years following a string of persistent injuries.

The 58-year-old briefly served as operations director at Darlington and now works in the media for both BBC and ITV Sport.

Blackmore played in United's first match of 1992/93, one of 14 appearances in an injury-hit spell at Old Trafford. The defender joined Middlesbrough in 1994 and then had brief spells at Barnsley and Notts County before seeing out his playing career in non-league football.

He returned to Man Utd as an academy coach (2010 - 2017), then joined the coaching staff at the Dynamo Brest Academy in Belarus. He is now a professional golfer and in June 2022 just fell short qualifying for the Senior Open at Gleneagles.

An integral part of Ferguson’s first great United side, Ince moved to Inter Milan in 1995 before returning to the Premier League with Liverpool in 1997. He had further spells at Middlesbrough, Wolves, Swindon Town and Macclesfield Town before retiring in 2001.

When Robson's career at Old Trafford came to an end in 1994 he went straight into a role as player/manager at Middlesbrough as well as assisting England boss Terry Venables as coach and right-hand man.

Robson left Boro after seven seasons in June 2001 and later rejoined his first club, West Brom, steering them to Premier League safety in 2004/05, before spells at Sheff Utd and as the national boss of Thailand. These days he's an ambassador for Man Utd and a TV pundit.

Phelan left Old Trafford in 1994 but after 18 months at West Brom he was forced to quit through injury.

The one-time Premier League winner gained managerial experience as assistant at clubs including Norwich City, Stockport County and Blackpool. He returned to Man Utd as reserve manager in 2001 and then worked under Sir Alex Ferguson as assistant manager between 2008 and 2013, but left that summer.

Phelan returned for a third stint at the club in 2019 as Ole Gunnar Solskjaer's No.2 following a spell as the sporting director of Central Coast Mariners in Australia.

After an 18-year playing career in which he played across the globe from Scotland to Saudi Arabia, Kanchelskis retired in 2007, but within two years had taken on his first managerial role with FC Torpedo-ZIL Moscow.

He continued his globe-trotting in management with stints in Russia at both FC Ufa and Solyaris Moscow, Latvian side FC Jurmala most recently Navbahor Namangan in Uzbek.

When Giggs announced his retirement in May 2014 it brought an end to a 24-year playing career in which he made 963 first-team appearances and amassed an incredible 35 winners’ medals, including 13 Premier League titles and two UEFA Champions League trophies.

He also won the FA Cup on four occasions, the League Cup three times as well as the UEFA Super Cup, Intercontinental Cup and the FIFA Club World Cup.

He had a brief stint as caretaker manager in 2014 following the dismissal of David Moyes, and had a further two seasons as assistant to Louis Van Gaal before ending his 29-year association with the club in 2016.

After a career plagued with injuries Sharpe retired from football aged just 32 following three seasons in the lower leagues with Bradford and Exeter City.

The former winger appeared on a string of reality TV shows including Celebrity Love Island, Dancing on Ice and Celebrity Wrestling, before moving back into football as a pundit. He is now a professional golfer and after dinner speaker.

After five successful years at Man Utd in which he won four Premier League titles, Cantona started a new career in beach football where he captained and also managed the French international side until 2011, winning the FIFA Beach Soccer Tournament in Brazil in 2005.

He returned to 11-a-side football later that year as director of football at New York Cosmos, where he spent 18 months.

Cantona has pursued a career in the film industry and has acted in a number of international films.

Hughes scored United’s first goal in the Premier League era in the 2-1 opening day defeat at Sheff Utd and it was his 100th league goal against Crystal Palace that helped clinch their first ever Premiership crown.

The striker left Old Trafford for Chelsea in 1995, before spells at Southampton, Everton and Blackburn, retiring in 2002.

Now manager at Bradford City, Hughes has also had spells as Wales national team boss, and managed at six clubs including Blackburn, Man City and Fulham.

McClair retired from playing in 1998 after spending his final season with Motherwell. He cut his coaching teeth with the Scottish club and then Blackburn before returning to Old Trafford in 2001 as part of in the backroom staff, winning the Premier Reserve League and 2003 FA Youth Cup.

After nine years as director of the Man Utd youth academy (2006-2015), McClair had a 12-month stint as performance director at the Scottish Football Association. McClair now hosts his own podcast, Life with Brian.

Dublin enjoyed successful spells with Coventry City and Aston Villa after leaving United. He now works as a football commentator and pundit, and presents Homes Under the Hammer on BBC One.

The former forward is also an amateur musician and invented a percussion instrument in 2006 called “The Dube", which has been used and endorsed by the likes of Courtney Pine and Thomas Lang.

A regular face in the director's box at Old Trafford since his retirement in May 2013, Ferguson left behind a legacy that can arguably never be surpassed.

There is now a Sir Alex Ferguson stand at Old Trafford and a statue outside the ground. Ferguson, 80, is also Vice-President of the National Football Museum.