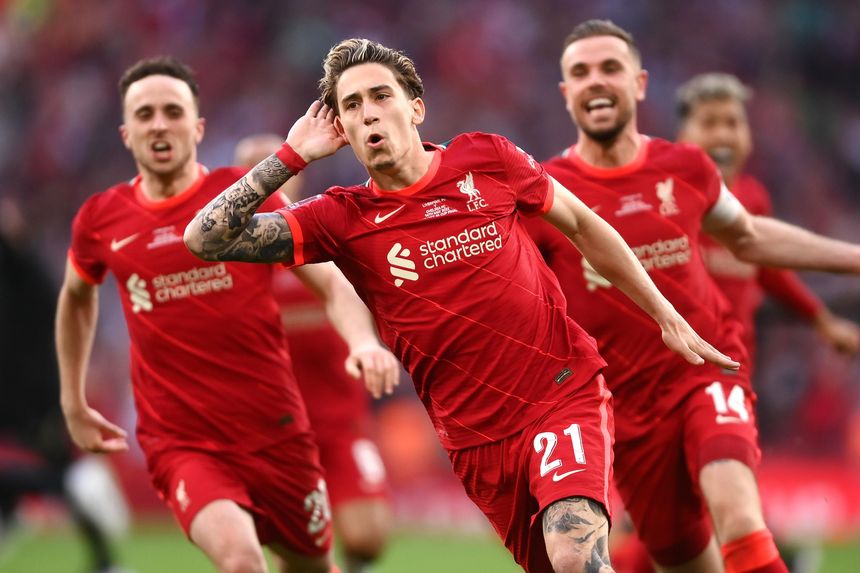 Kostas Tsimikas scored the winning spot-kick as Liverpool beat Chelsea 6-5 on penalties in the FA Cup final at Wembley Stadium.

WE ARE THE #EmiratesFACup WINNERS!!!!!!! pic.twitter.com/eZMe5IRbB2

After a brilliant match ended goalless following extra-time, Tsimikas sent Edouard Mendy the wrong way to give Liverpool their second trophy of the season and keep alive their hopes of a quadruple.

They will now hope for a favour from West Ham United in the title race when leaders Manchester City travel to London Stadium on Sunday, two days before Liverpool play Southampton.

See: What's at stake in Matchweek 37

Their first FA Cup win under Jurgen Klopp did come at a cost, though, as Liverpool could be without some key players at St Mary's Stadium.

Mohamed Salah and Andrew Robertson were forced off with injuries on Saturday, while Virgil van Dijk also did not last the full match.

The winners of the FA Cup earn a place in the group stage proper of the following season's UEFA Europa League (UEL). But because Liverpool are guaranteed a top-four finish and a Champions League spot that comes with it, this UEL spot by dint of winning the FA Cup transfers to sixth place in the Premier League.

Currently Manchester United are in sixth but West Ham United will overtake them and return to the competition of which they reached the semi-finals this season if they win their remaining two matches.

What about UEFA Conference League?

Liverpool earned a place in the playoff stages when they beat Chelsea on penalties in the EFL Cup final back in February. But, again, because of their guaranteed top-four spot this UEFA Europa Conference League (UECL) place instead goes to the seventh-placed Premier League finishers.

Eighth-placed Wolverhampton Wanderers are still in the hunt but must win at home to Norwich City on Sunday and hope West Ham do not beat Man City in order for their hopes to stay alive.