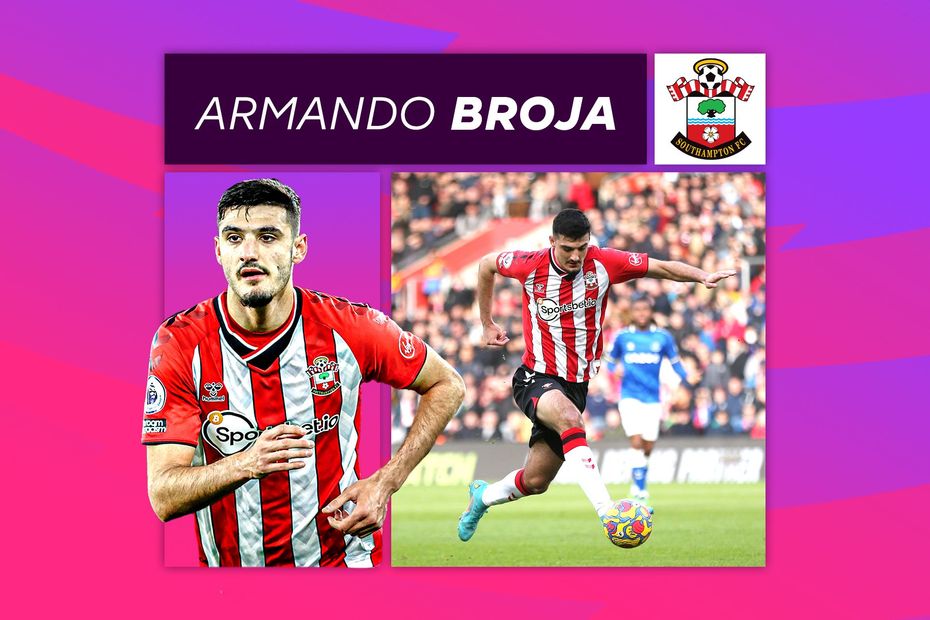 Adrian Clarke assesses the impact of the pacy, powerful and clinical forward as Saints host Norwich

The decision to take Broja on loan from Chelsea at the start of the season has proved to be an inspired one by Southampton.

With six goals scored at a rate of one every 204.8 minutes, he has made a big impression at St Mary's Stadium.

The 20-year-old reached double figures on loan at Dutch club Vitesse last term, netting 10 times, and is on course to match that figure in his debut Premier League season.

Broja is quick, strong and calm in front of goal, so he will need to be watched closely by Norwich City under the lights on Friday night.

Eight of his 21 outings for Saints have come as a substitute.

All six of the Albania international's strikes have arrived via his favoured right foot.

Remarkably, Broja has scored more right-footed goals per 90 minutes than any other Premier League player this season.

When you consider his nearest rivals Cristiano Ronaldo and Neal Maupay have scored three penalties between them, it is an impressive achievement.

Some players require regular action to build rhythm, but throughout his successful loan spell Broja has handled being in and out of the starting XI very well.

With such a good temperament to match his ability, he must be regarded as one of the most promising young centre-forwards in Europe.

Five of Broja's six goals for Southampton have come from counter-attacks or turnovers.

He rounded off rapid breakaways to score with quality finishes against Leeds United and Brentford at St Mary's.

Under Hasenhuttl, Saints are one of the most effective pressing sides in the league, and Broja's explosive speed helps turn those transitions into clear-cut chances.

He reacted sharply to a turnover in possession to score with a long-range effort at Crystal Palace, and his goals against Burnley and Brighton & Hove Albion really highlighted his potential.

5️⃣ goals in a #SaintsFC shirt

Sprinting beyond the opposition defence to latch on to through-balls in the immediate aftermath of a turnover in both those matches, Broja showed how deadly he can be in one-v-ones.

His pace and alert movement means he becomes an instant outlet for his side, and he adds a layer of penetration that complements Southampton's pressing tactics.

Broja is quicker than Norwich's central defenders and on Friday night he will make dynamic runs in behind them whenever an opportunity presents itself.

He is proving to be ice-cool and composed in crucial moments.

Wherever his long-term future lies, Broja looks capable of plundering plenty more goals at this level.

Part 2: Lampard can profit by sticking with front two against City
Part 3: Antonio's pace can hasten his return to form