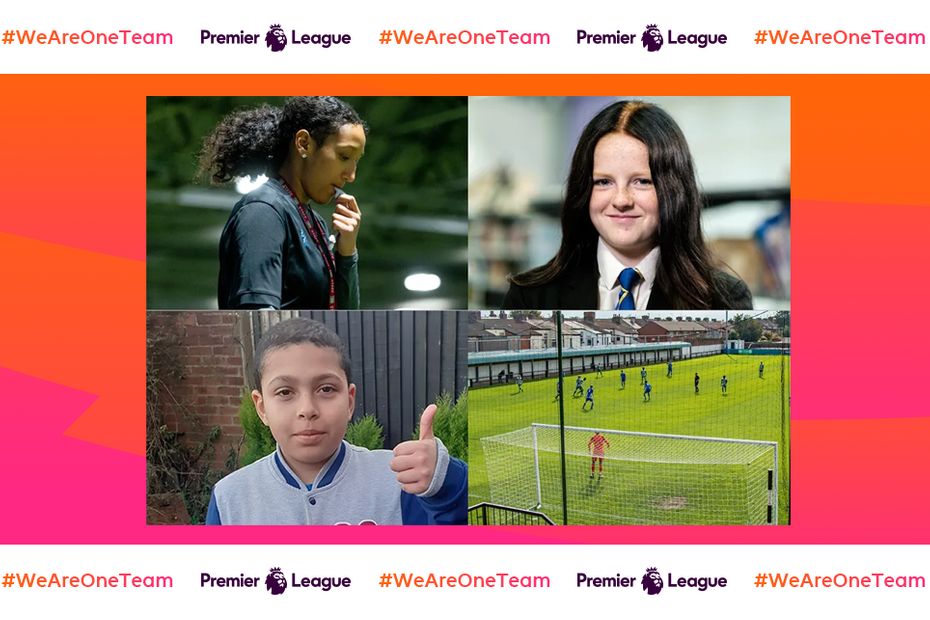 The Premier League invests £100m per season in local facilities, community schemes and education programmes throughout England and Wales.

Here you can learn more about each of these initiatives and read and watch stories from those who have benefited from them.

Premier League Primary Stars (PLPS) works with more than 18,000 primary schools across England and Wales, using the power of football to inspire children to learn, be active and develop important life skills.

In the 2019/20 academic year, 110 professional clubs received Premier League funding to deliver programmes in their local schools and 1.2m+ children were engaged via the online resources.

The disruption and lack of routine caused by the coronavirus pandemic proved particularly challenging for David to understand and manage.

"He used to come home very angry from school many times," said David's dad Muhamadu. "He couldn't control himself."

Norwich's sessions focusing on goal-setting, positive mindsets and dealing with stress and emotions have helped David to flourish and start setting goals, such as improving at maths in school and becoming a baker.

Hannah found life a struggle at Lanesfield Primary School in Wolverhampton and was getting into trouble in class as well as distracting others.

PLPS sessions with coaches from Wolves Foundation gave her the skills and encouragement to collaborate and co-operate with other schoolchildren.

As a result, she has taken roles of responsibility and become a role model within the school.

Premier League Inspires is supported by the Professional Footballers' Association and the Prince's Trust and uses the power of football and local clubs to motivate marginalised 11 to 25-year-olds to develop the personal skills and positive attitudes to succeed in life.

The programme began in 2019 and was run by 31 Premier League and EFL club community organisations last season, providing 12,410 hours of targeted support to youngsters.

Morgan was one of millions of teenagers whose mental health was affected by the pandemic. The 13-year-old felt cut off from her friends by the lockdown.

Thanks to the intervention of Albion Foundation, the charitable arm of West Bromwich Albion, through Premier League Inspires, Morgan has built the confidence to become a mental health ambassador at the school.

"I feel like if someone was to come to me and tell me about their problems, I'd understand, and I'd understand how much courage had come for them to talk about it," she said.

Aimed at eight to 18-year-olds, Premier League Kicks has been engaging young people of all backgrounds and abilities from high-need areas in football, sport and personal development since 2006.

Premier League Kicks is now run by more than 90 professional football clubs across England and Wales, and over the last 15 years has engaged more than 400,000 young people.

She progressed to being a volunteer, where her talents as a sports coach and a leader emerged. She has since fulfilled her dream of working in football as a full-time member of staff at Aston Villa Foundation, having become an apprentice in 2018.

"If I never had Kicks, my level of ambition would have been capped," she said. "Through volunteering with Kicks and then actually applying to do an apprenticeship, it kind of gave me hope: that no matter where you're from, there is always opportunity there."

The Premier League is the sole funder of the Football Stadia Improvement Fund (FSIF), which provides grants to improve the comfort, safety and accessibility of clubs' grounds from the EFL down to the lower levels of the FA National League System and the Women’s Football Pyramid.

Through the FSIF, the Premier League has supported the development of playing and spectator facilities at more than 1,500 clubs, across 59 leagues with over 6,000 grants awarded, including COVID-19 support grants.

In 2019, a FSIF grant of more than £80,000 allowed Northern Premier League Division One North West side Marine FC to build a brand new clubhouse, entrance and turnstiles, as well as providing facilities for disabled supporters.

"It helps a club of our size to generate income that helps to keep Marine FC alive," club chair Paul Leary said.

Funded by the Premier League, The Football Association and Government, the Football Foundation has contributed to the development of more than 8,500 grassroots playing and changing facilities across England and Wales since 2000.

In 2019, Liverpool's Trent Alexander-Arnold and Everton's Tom Davies saw how the Football Foundation had developed four multi-sports hubs as part of a £20.8m project to transform sporting facilities across the city.

The Premier League Charitable Fund creates and supports activities that inspire young people to achieve their potential and positively impact their communities.

Since the charity was formed in 2010, over 1.5m young people have been involved in one of the programmes, festivals or community activities delivered through the community arm of Premier League and English Football League clubs in England and Wales.

It distributes funding of around £35m a year from the Premier League and other partners.