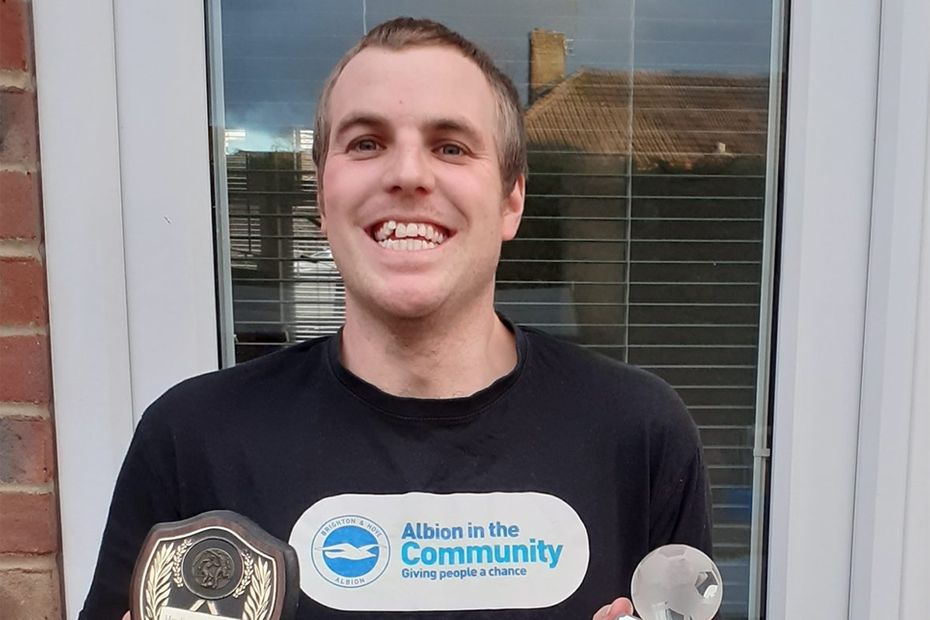 This Loneliness Awareness Week, we are looking at how Premier League clubs have been working in their local communities during the COVID-19 pandemic to keep people connected and to help those at risk of social isolation.

Joe Campbell has benefited from Albion in the Community's (AITC) disability sessions for the last 20 years and that support has been more important than ever during the pandemic.

He was born with congenital ataxia, which affects a person's coordination and balance, as well as speech and language difficulties.

Joe first joined Albion in the Community when he was 10 years old. At the time, Joe was non-verbal and only used sign language to communicate.

The football sessions helped to develop his confidence and speech, giving him the opportunity to make new friends.

As well as becoming a volunteer coach, Joe has two jobs, working as a roofing contractor's assistant and doing a beloved paper round.

The latter role in particular has helped him to become more connected with his community and he regularly helps his neighbours with little jobs. His mum Jools puts his growth in confidence and improved social skills down to his experiences with AITC.

The arrival of the pandemic meant those connections were put on hold.

However, Joe has managed to stay connected with AITC as he has been a regular participant on their online programme designed to bring people together.

"The connection with Albion in the Community was so important for Joe," Jools told Brighton's official website. "He lost so much with limitations around work but it was great for him to see and speak with his friends and coaches.

"The sessions gave Joe something to focus on and was a huge support for all of us. We've seen him grow even more as a person and his confidence has developed through attending and making more new friends."

Despite being unable to take part in face-to-face activities because of lockdown, he has been on hand to give encouragement to others.

"We are proud of all that Joe has achieved during his time with AITC but the way he has connected with others through this pandemic and helped support them too has been fantastic," AITC's disability manager Paul Brackley said.

People can get involved with the #LetsTalkLoneliness campaign, which raises awareness of loneliness and supports those who are socially isolated at this time.

For tips on what you can do, and to find out where to get support, visit the LetsTalkLoneliness website.

It’s as important as ever to take action if you or someone you know is feeling lonely.#LetsTalkLoneliness this #LonelinessAwarenessWeek