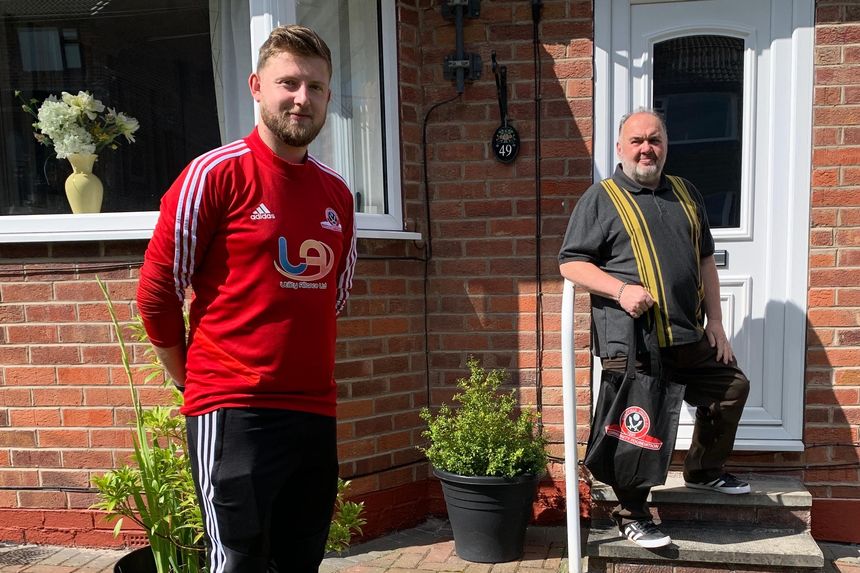 This Loneliness Awareness Week, we are looking at how Premier League clubs have been working in their local communities during the COVID-19 pandemic to keep people connected and to help those at risk of social isolation.

For those with cancer, the COVID-19 pandemic and subsequent lockdown may have added to feelings of loneliness.

But the work of Sheffield United's Fans Fighting Cancer programme, and one of its participants Shaun Pearson, is supporting those people and keeping them connected and active.

Shaun, pictured on the right in the photo above, has been involved with Fans Fighting Cancer for the past three years after both he and his son had the illness diagnosed.

He initially started as a participant on Sheffield United Community Foundation's walking football sessions, which as well as providing physical activity allows players to talk about their experiences.

"We can provide extra support, which is not so clinical and not as scary as talking to a doctor, and instead communicate with people who have been there and done it," Shaun says.

Now he helps the Foundation coaches to deliver the sessions and is working towards his FA Coaching Level 1 and UK Coaching Mental Health Awareness in Sport qualifications.

"I want to help, create more groups, and demonstrate that sessions can be fun, can give you the chance to meet new people of all ages, and play the beautiful game," he explains.

"It can give people something to look forward to, even when things may seem negative.

"Taking a lead gives me a real buzz. Fans Fighting Cancer allows me the opportunity to achieve something I have always wanted to do but never thought possible."

Shaun was given additional support from the Sheffield United Community Foundation during the pandemic when he received a care package distributed to those affected by cancer as part of the Fans FC programme.

"It shows how much the Sheffield United Community Foundation cares about us and that we're not forgotten about," he says.

Josh Blunkett, the Foundation's Health Coordinator, has watched Shaun's progress with a sense of pride.

"Shaun has been inspirational," says Josh. "It's testament to him how much he not only helps myself and the team but how he encourages and offers support for everyone in the group."

The Fans FC programme is funded by the Premier League Charitable Fund, and is one of the many ways Premier League clubs have been supporting their communities during the coronavirus pandemic.

People can get involved with the #LetsTalkLoneliness campaign, which raises awareness of loneliness and supports those who are socially isolated at this time.

For tips on what you can do, and to find out where to get support, visit the LetsTalkLoneliness website.

It’s as important as ever to take action if you or someone you know is feeling lonely.#LetsTalkLoneliness this #LonelinessAwarenessWeek