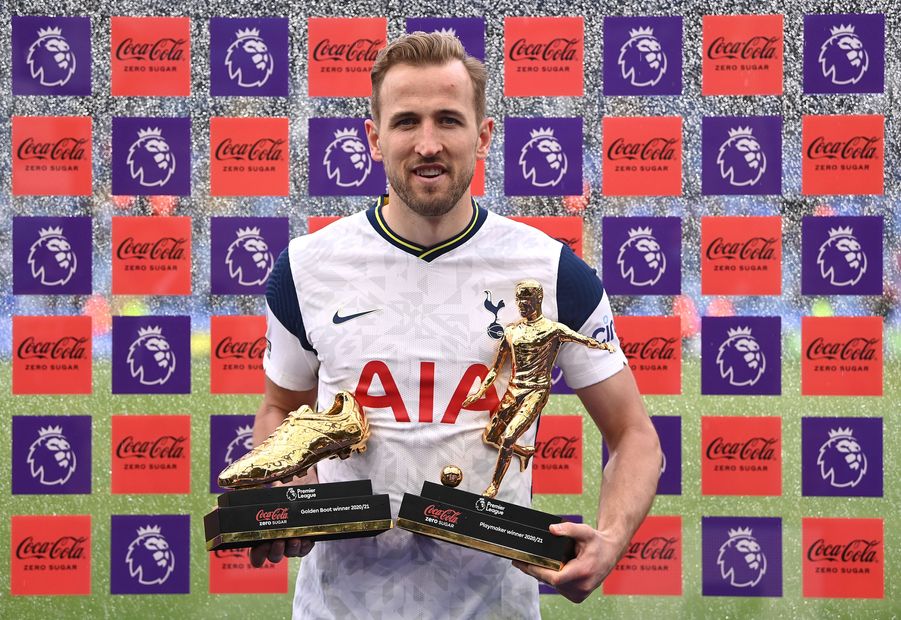 Harry Kane underlined his status as one of the Premier League's most complete forwards by winning both the 2020/21 Golden Boot and Playmaker awards.

Fittingly, Kane scored a goal and provided an assist in Tottenham Hotspur's final-day 4-2 victory at Leicester City to secure his historic double of the awards that are presented by Coca-Cola.

He is the first player for 22 seasons, and only the third ever, to finish top of both rankings in the Premier League.

Andrew Cole managed the feat with Newcastle United in 1993/94, while Jimmy Floyd Hasselbaink finished joint-top of both charts for Leeds United in 1998/99.

Kane started the final day of the season level with Mohamed Salah on 22 goals in the Golden Boot race, but his first-half strike at Leicester proved decisive.

Volleying low past Kasper Schmeichel, the 27-year-old scored his 15th goal in 12 Premier League matches against the Foxes.

He has won the Golden Boot three times, becoming only the third player to manage that hat-trick after Premier League Hall of Fame inductees Alan Shearer and Thierry Henry.

Kane also held on to the Playmaker award after surviving late pressure from Kevin De Bruyne.

The Manchester City midfielder was aiming to win the prize for the third time in four seasons, and a 14th-minute assist against Everton took him one behind Kane.

City went on to win 5-0, but De Bruyne could not add to his goal involvements, and Kane cemented the award with an 87th-minute assist for Gareth Bale.

Kane was also helped by his nearest rival Bruno Fernandes, who started the day just one assist behind, being omitted from Manchester United’s squad at Wolverhampton Wanderers, with the Portuguese rested ahead of Wednesday’s UEFA Europa League final.

See: Every Golden Boot winner
See: Every Playmaker of the Season award winner