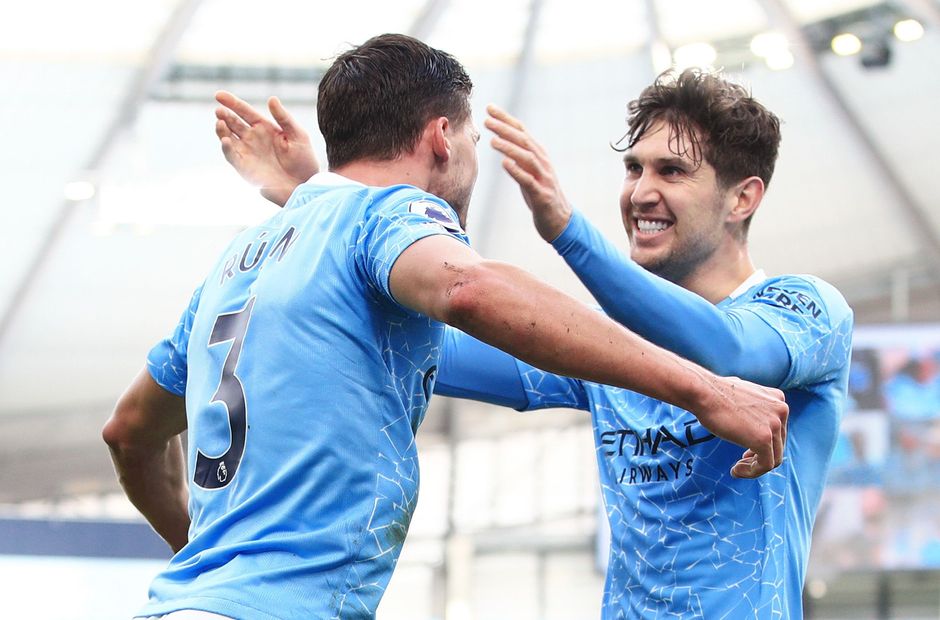 Owen: Ruben Dias is my player of the season
Alan Shearer's 2020/21 Team of the Season
Manchester City's 2020/21 title win by numbers

In the final part of a three-part series, Adrian Clarke looks at how Pep Guardiola transformed Manchester City to secure the club's fifth Premier League title in 2020/21.

The acquisition of Ruben Dias from Benfica greatly enhanced their defence and his partnership with a rejuvenated John Stones proved a tremendous success.

Intelligent, resolute and composed, the Portugal international’s quality ensured City were no longer reliant on veteran midfielder Fernandinho filling in as an auxiliary defender.

Running attackers into cul-de-sacs, pinching the ball off their toes or simply holding them up, Dias was terrific in 1v1 situations. He also slotted into City's style with ease, distributing the ball comfortably from the back.

In 19 Premier League matches in which they started together, City kept 13 clean sheets.

Phil Foden’s emergence was also key. He scored nine PL goals and provided five assists, adding sparkle to the side wherever he played and giving them a dashing new dimension.

Effective as a left-sided forward, as part of a midfield trio or as a designated false nine, the 21-year-old showcased great versatility during 2020/21.

While Foden has yet to settle into a defined role within City’s starting XI, his adaptability offered a major tactical weapon.

His end product was also highly impressive as he emerged as one of the most consistent players in the title-winning squad.

If the youngster had made more than 17 top-flight starts this term his numbers could have been incredible.

He did not go more than three consecutive appearances without supplying a goal or assist.

The German had never scored more than six goals in a season but netted 13 times in 2020/21.

Scoring once every 156.2 minutes, his 30.2 per cent conversion rate trebled from the 10.5 per cent of the previous year.

In a City side less reliant on a striker, Gundogan’s runs from deep proved a potent weapon.

Both individually and collectively, Guardiola found new ways to maximise the talents of his players and steer City to glory once again.

It was Gundogan’s incredible goalscoring streak between December and February that breathed life into City’s title challenge.

During that period he was untouchable in front of goal, scoring 11 times in 12 matches.

From that period onwards City’s forwards took turns to take the spotlight.

When one player's form dipped, somebody else stepped up to the plate to deliver goals for the champions-elect.

Riyad Mahrez, Gabriel Jesus and Ferran Torres all enjoyed fantastic spells during the second half of the season to ensure the momentum was maintained.

This rotation of influence was a key ingredient in City’s charge towards another Premier League crown.