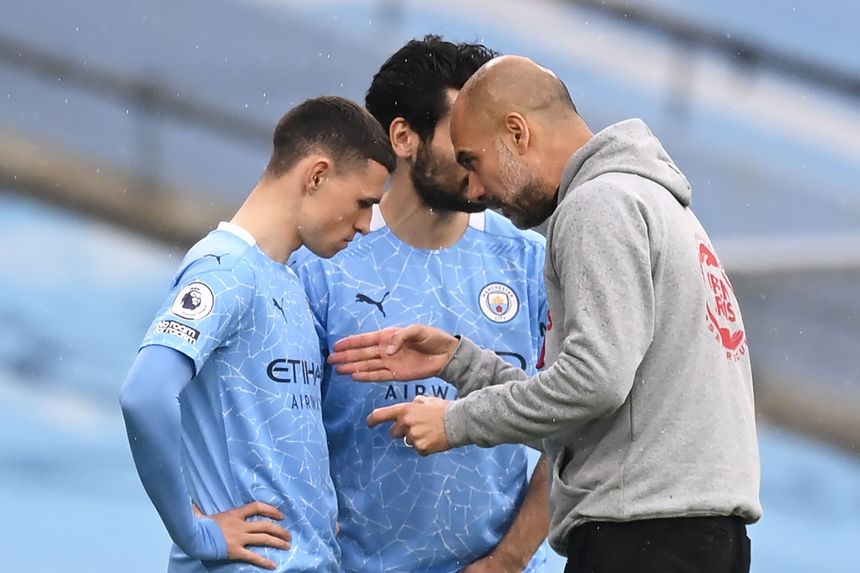 Guardiola: "I know how good my team are" External Link
Owen: Man City the team to beat again next season
City fan hands over Trophy after battle with brain tumour

Pep Guardiola reacted to a poor start to 2020/21 by altering Manchester City's style of play, and it paid off as they were crowned Premier League champions.

The most significant change to Guardiola's tactics was his penchant for starting without a recognised striker.

He used a "false nine" in 13 out of 38 matches, and rotating the likes of Bernardo Silva, Kevin De Bruyne, Ilkay Gundogan, Ferran Torres, Raheem Sterling and Riyad Mahrez proved an effective ploy.

City’s 3-1 win at Chelsea in January and their 4-1 success at Liverpool a month later were standout triumphs for this system.

Intelligent movement caused both opponents all sorts of problems in those memorable away victories.

Phil Foden and Gundogan are two players who have thrived in this set-up.

Foden’s mobility and movement proved well-suited to a fluid formation, and with no main striker taking up goalscoring positions Gundogan’s bursts into the box were even more dangerous.

Between them Foden and Gundogan shared seven direct goal involvements in those two aforementioned wins.

At Liverpool, City operated almost in a 2-3-3-2 formation with two split-strikers, Sterling and Mahrez, using Foden as the false nine.

City's average position map, including passing lines, from their stunning Anfield success can be seen below.

Foden (47) showed great efficiency in his "false nine" position. He had only four touches inside the opposition box but contributed with a goal and an assist.

In comparison, the graphic above shows how different City set up for their 2-0 win at Leicester City. Guardiola fielded two central strikers, with Sergio Aguero (10) flanked by Gabriel Jesus (9).

As a by-product of this strategy, there was far less emphasis on width.

City’s full-backs and wide forwards hugged the touchline less, resulting in a major drop in the number of crosses into the box.

This made perfect sense in the absence of a natural striker who attacks crosses.

Adopting a narrow attacking approach was a huge change for City, who dropped from first to 16th in the rankings for the most open-play crosses.

The number of successful crosses also more than halved when compared with 2019/20.

To win the title having experienced such a large downturn is remarkable.

Asking his full backs to back up attacks from more withdrawn central positions, rather than flying forward on a regular basis, Guardiola’s tactical shift was a big change.