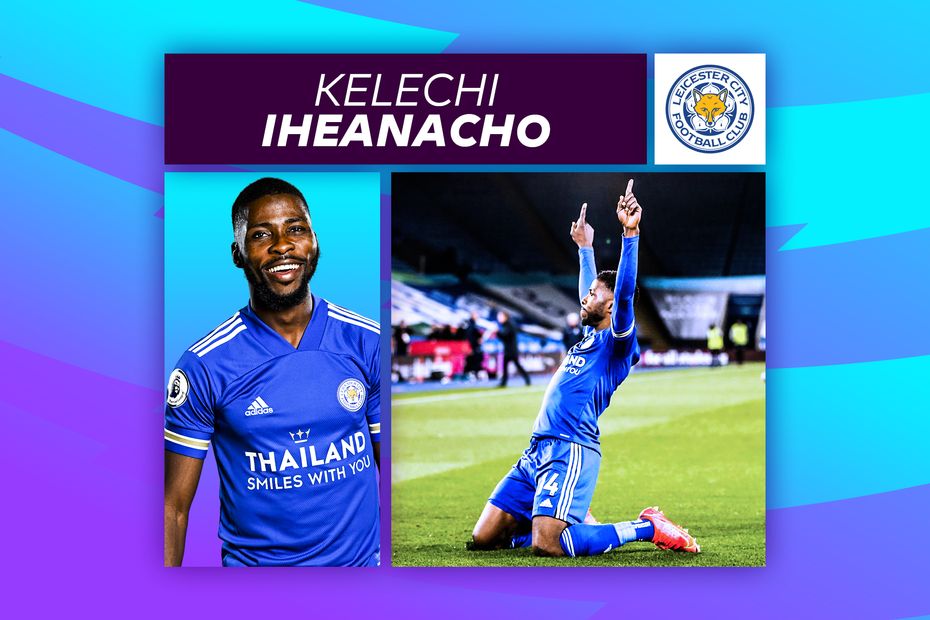 We’re getting the goals we need, says Iheanacho External Link
Nominees to join Hall of Fame in 2021
Heskey: Iheanacho is stepping out of Vardy's shadow

Kelechi Iheanacho is the most improved and in-form striker in the Premier League.

He has scored 14 goals in his last 14 appearances for Leicester City in all competitions, finding the net nine times across his last seven top-flight starts.

For the first time since joining Leicester, Iheanacho is enjoying an extended run up front alongside Jamie Vardy and revelling in Brendan Rodgers' change from a 4-2-3-1 to a 3-4-1-2 formation.

Southampton will need to be aware of Iheanacho's threat this Friday.

Iheanacho reached the 10-goal mark in a season for the first time in his Premier League career when he netted the winner at home against Crystal Palace on Monday.

His stats compare favourably with the division's other leading strikers.

The Nigerian is scoring at a faster rate than anybody else with 10 or more goals this term, and no other player on that list boasts a better conversion rate.

While Vardy has struggled for goals, scoring only twice since Christmas, he deserves enormous credit for helping Iheanacho to blossom.

Vardy made trademark sprints behind defenders down the left wing and produced perfect low crosses to set up Iheanacho for two simple finishes against Sheffield United.

Iheanacho also netted in identical fashion against West Bromwich Albion thanks to the hard work of his team-mate.

One distinct advantage of starting two out-and-out strikers is the way they feed off each other's movement to drag markers out of position.

Vardy and Iheanacho work well in this regard, creating space with subtle runs.

A great example of this came at Burnley when Iheanacho equalised with a stunning left-footed volley.

As Wilfred Ndidi looked up to play a pass, the two strikers each occupied a Burnley central defender, before Vardy distracted his marker with a short, sharp run.

This created space for Iheanacho to run into before applying a superb finish.

Had Leicester gone with a lone striker this scenario is unlikely to have unfolded and, since then, the pair's chemistry has continued to develop.

In 765 Premier League minutes together this season, Iheanacho, with five, and Vardy, with six, have created 11 chances for each other. That is an average of one every 69.5 minutes.

Now one of the first names on the teamsheet, Iheanacho is full of self-belief and has the confidence to try his luck with shots from difficult situations.

He struck an instinctively sweet strike on the turn from 20 yards at West Ham United and drilled in a low 25-yard effort to complete his hat-trick against Sheff Utd.

His most recent effort was a crashing, left-footed drive into the roof of the net against Palace.

All three were rated five per cent or lower on Opta's Expected Goals (xG) index.

Over the course of this season Opta's data suggests Iheanacho should have scored 6.6 goals this term, based on the quality of his chances.

He has outperformed that figure by more than three and has emerged as one of the most dangerous forwards in English football.

If Iheanacho continues this outstanding run of form, his goals will fire third-placed Leicester back into Europe and may even win them silverware.