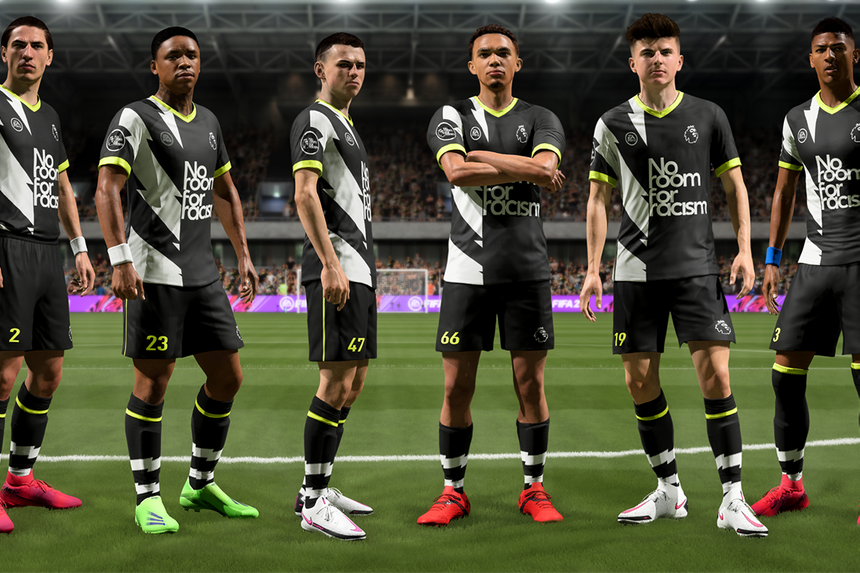 EA SPORTS has shown it stands side-by-side with the Premier League as we seek to eradicate racial prejudice by launching new-look No Room For Racism branding in FIFA 21.

A new No Room For Racism FUT Kit, TIFO, Stadium Theme and Badge in FIFA Ultimate Team are available until 26 March.

The Premier League recently launched its No Room For Racism Action Plan, outlining a series of commitments aimed at combating racism and creating greater access to career opportunities for Black, Asian and other minority ethnic groups in football.

Richard Masters, the Premier League's Chief Executive, said: "Racist behaviour of any form is completely unacceptable and nobody should have to deal with it.

"The Premier League will not stand still on this important issue and we will continue to work with our clubs, players and partners to address all forms of prejudice. There is no room for racism, anywhere."

Hector Bellerin, Steven Bergwijn, Phil Foden, Trent Alexander-Arnold, Mason Mount and Patrick van Aanholt are shown above wearing the new No Room For Racism FUT kit, highlighting the diversity of a sport that brings together communities and cultures from all backgrounds.

“I’m standing by my team mates at both club and country," Manchester City midfielder Foden said. "Together we’re going to continue the fight against racism. Enough is enough."

Liverpool right-back Alexander-Arnold added: "Racism has no place in football. We must join together to kick it out for good."