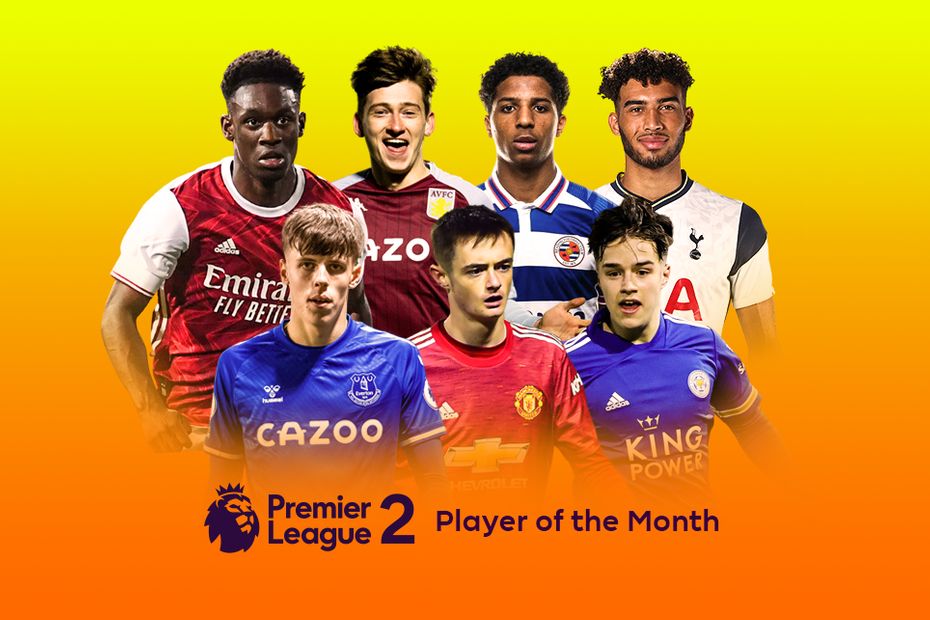 Seven young talents have been nominated for January 2021's Premier League 2 Player of the Month award.

The shortlist was selected by the Premier League's Football Development Panel after PL2 club coaches had nominated the best performance by an opponent in each of their league matches.

The Panel will also decide the winner, who will emulate Leeds United's Sam Greenwood, Manchester City duo Cole Palmer and Liam Delap, and Chelsea midfielder Lewis Bate in claiming a PL2 award in 2020/21.

The 19-year-old forward scored a hat-trick and provided an assist as Arsenal beat Brighton & Hove Albion 5-0, their fifth PL2 Division 1 victory in a row.

The 17-year-old forward scored his first senior goal in Aston Villa's FA Cup tie against Liverpool on 8 January. He also netted four goals in two Division 2 matches, hitting the winner in a 2-1 defeat of West Bromwich Albion before scoring a hat-trick in Villa's 3-2 win at Norwich City.

The 19-year-old was pivotal at the back as Reading enjoyed an unbeaten month in Division 2, conceding just once. Bristow also contributed at the other end of the pitch, scoring the opener in a 3-0 win at Fulham.

After scoring and providing an assist in a 5-1 win at Brighton, the 19-year-old striker featured in a 2-1 victory at West Ham United and was on target in a 1-1 draw with Arsenal as Spurs finished January top of Division 1.

The attacking midfielder scored in the opening minute as Everton shared the derby spoils in a 1-1 draw with Liverpool. The 19-year-old produced two assists as Everton claimed a 4-2 victory at Leicester City to stay in contention at the top of Division 1.

The 17-year-old forward scored four times in a dazzling display as Manchester United won 6-3 at Liverpool, taking his tally to eight goals in Division 1.

The 19-year-old was on target in Leicester's 4-2 EFL Cup defeat by Tranmere. The forward also scored and provided an assist as the Foxes beat Man Utd 4-2 in Division 1, before repeating that feat in a 4-2 loss to Everton.