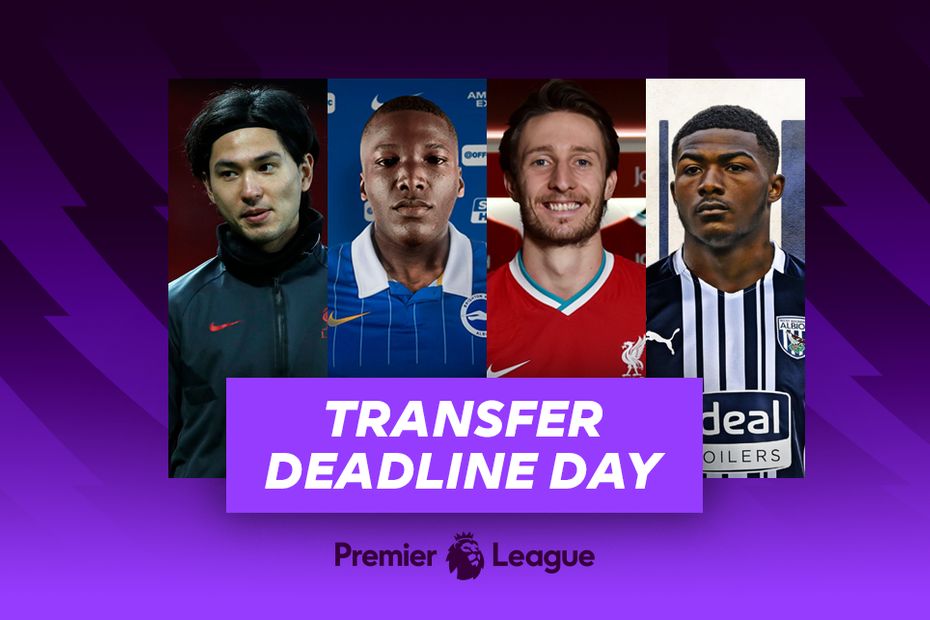 Find out which players were signed on the final day of the January transfer window, including Takumi Minamino

The deadline for the January 2021 transfer window passed on Monday 1 February.

Here is what happened on Transfer Deadline Day.

The deals as they happened

01:00 In the nick of time Southampton have managed to recruit the services of Liverpool attacking midfielder Takumi Minamino on loan until the end of the season.

01:00 Everton have managed to get a deal for a new forward over the line by bringing in AFC Bournemouth's Josh King on loan.

00:19 Newcastle United's new on-loan midfielder cannot wait to get started in the black and white of the Toon. Here's what Joe Willock has to say:

🗣 A message from our new signing!

00:15 Forward Shane Long has moved along the south coast from Southampton to AFC Bournemouth to help the Cherries' promotion push in a loan deal until the end of the season.

23:42 Two Everton players will ply their trade in the Championship until the end of the season. Midfielder Beni Baningime has been recruited by former Everton star and now Derby County manager Wayne Rooney, while forward Anthony Gordon is off to Preston North End.

23:30 Fulham have completed the loan signing of Josh Maja on loan from Ligue 1 side Bordeaux.

Rabbit out the hat! 🐇

23:22 Southampton full-back Yan Valery has completed a loan move to Birmingham City until the end of the season.

23:00 There has been another outgoing from Arsenal, with Joe Willock the latest player to leave on loan. The midfielder will spend the remainder of the campaign at Newcastle United.

22:58 West Bromwich Albion have completed their fifth signing of the transfer window by taking Arsenal's Ainsley Maitland-Niles on loan until the end of the season.

22:15 Tottenham Hotspur goalkeeper Paulo Gazzaniga has completed a loan move to Spanish LaLiga side Elche until the end of the season.

22:11 Fulham forward Aboubakar Kamara has moved to French Ligue 1 side Dijon on loan for the remainder of the season, while Maxime Le Marchand has joined Belgian club Royal Antwerp for the same period of time.

22:05 Centre-back Shkodran Mustafi has ended his stay at Arsenal by securing a permanent transfer to Schalke 04.

22:00 Liverpool have completed their second move of transfer deadline day with the loan transfer until the end of the season of defender Ozan Kabak, from Schalke 04. The 20-year-old, who will wear the No 19 shirt for the Reds, has been capped seven times by Turkey.

21:30 Everton right-back Jonjoe Kenny has moved to Celtic on loan for the remainder of the season. Academy graduate Kenny, 23, spent the 2019/20 campaign in the Bundesliga on loan at Schalke 04.

21:12 For those interested in why Sam Allardyce elected to bring Okay Yokuslu to West Brom, he has expanded upon the Turkey international's qualities, likening him to previous players he has bought.

"I signed Jan Kirchhoff from Bayern Munich at Sunderland and Luka Milivojevic from Olympiakos at Crystal Palace," he tells West Brom's official website. "He's that type of player.

"The one who can protect the back four, can be the best passer to create openings in attack and hopefully if he can settle as quickly as the two players I have just mentioned, then it will definitely help us to not concede as many goals."

21:02 Zech Medley, the Arsenal defender, has been recalled from his loan spell at Gillingham and sent to Scotland where he will help Kilmarnock's Scottish Premiership cause in another loan arrangement.

20:44 Crystal Palace forward Brandon Pierrick, 19, has joined Scottish Premiership side Kilmarnock on loan until the end of the season.

20:31 Liverpool defender Sepp van den Berg has moved to Preston North End until the end of the season.

20:02 Liverpool have bolstered their defence with the signing of Preston North End defender Ben Davies on a long-term contract.

The 25-year-old centre-back, who will wear the No 28 shirt for the champions, came through the Academy at Preston and made 145 appearances, scoring two goals.

"It came as a bit of a surprise," he told Liverpool's official website. "But once you start to get your head around it, the opportunity that is in front of me is incredible. I'd be silly to not make the most of it and learn off the players."

19:59 Kazaiah Sterling, the Tottenham Hotspur striker, will spend the remainder of the season on loan at Scottish Championship club Greenock Morton. Jack Roles, meanwhile, has secured a loan move from Spurs to Stevenage for the same period of time.

19:57 Sheffield United have loaned out two of their goalkeepers until the end of the season. Jake Eastwood has completed a move to Grimsby Town, while Dutchman Michael Verrips has returned to his home country, joining Eredivisie side FC Emmen.

19:45 Arsenal defender Joseph Olowu has sealed a loan move to National League South side Wealdstone for the remainder of the campaign.

19:02 Two players have left Wolverhampton Wanderers on loan until the end of the season. German midfielder Meritan Shabani, 21, has joined Eredivisie side VVV-Venlo, while 18-year-old right-back Luke Matheson is set for a spell at Ipswich Town.

18:45 After spending half a season on loan at Girona, Manchester City goalkeeper Aro Muric will see out the next few months at Willem II of the Eredivisie.

18:22 Everton striker Cenk Tosun has departed Merseyside for a loan spell in his native Turkey with Besiktas.

The 26-year-old midfielder joins the Baggies until the end of the season and becomes their fourth signing of the January transfer window.

17:15 Goalkeeper Jonathan De Bie is leaving Tottenham Hotspur on a permanent basis. He returns to his native Belgium to join RWB Molenbeek in second tier.

16:55 Burnley goalkeeper Lukas Jensen has joined Bolton Wanderers on loan for the remainder of the season, while Clarets midfielder Adam Phillips will help Accrington Stanley's push for promotion from League One, having spent the first half of the season at Morecambe.

16:15 Manchester United centre-back Teden Mengi, 18, has linked up with club legend Wayne Rooney, who has brought him to Derby County on loan until the end of the season.

The 19-year-old arrives from Independiente del Valle in his home country, having won the 2020 Under-20 Copa Libertadores. He has agreed a four-and-a-half-year deal.

Brighton's technical director Dan Ashworth told the club’s official website: “Moises has had a lot of interest from clubs across Europe, which is understandable given how well he has done.

"He’s been one the recruitment team has been aware of for some time and we are confident he is a player with a very exciting future ahead."

15:30 Manchester City's 19-year-old centre-back Taylor Harwood-Bellis will spend the rest of the season on loan with Blackburn Rovers.

15:15 Leeds United forward Rafa Mujica has joined Spanish side Las Palmas on loan, while Conor Shaughnessy is leaving the Whites permanently. A mutual agreement has been reached to terminate his contract.

15:10 Wolves Academy goalkeeper Jamie Pardington is heading out on loan to Mansfield Town for the rest of the season.

14:05 Defender Roderick Miranda has left Wolves, with his contract ending by mutual consent.

14:00 Spurs striker Troy Parrott, who spent the first half of the season on loan at Millwall, has joined Ipswich Town for the rest of the campaign.

13:40 Mbaye Diagne made an immediate impact on his West Bromwich Albion debut, coming off the bench at half-time and setting up a goal. Fantasy Premier League managers can now add him to their squads, with the forward being priced at £6.0m.

12:00 Mikel Arteta has provided an update on Arsenal's plans for deadline day.

"The last day of the transfer window is always unpredictable so things can happen," the manager told the club's official website. "We have decided [who could leave on loan today] and we are working on it. You will find out before 11pm. Hopefully we won't have any bad surprises and we can control what we want to do."

11:02 Arsenal's 20-year-old midfielder Matt Smith has been recalled from his loan spell with Swindon Town and is now linking up with another League One club, Charlton Athletic, for the rest of 2020/21.

11:00 West Ham United defender Winston Reid is heading out on loan, joining Brentford for the rest of the season.

The 37-year-old striker, who helped fire Brighton into the Premier League in 2016/17, made 96 top-flight appearances for the Seagulls and scored 26 goals.

Head coach Graham Potter told the club's official website: "Glenn has been outstanding for this football club, a great pro and pleasure to work with. He quite rightly has earned legend status here."

🐐 Legend, simple as that.

09:00 Jonas Lossl is the first Premier League player to move on deadline day, with the goalkeeper leaving Everton and joining FC Midtjylland, where he started his career.

08:00 Crystal Palace have announced goalkeeper Vicente Guaita has extended his contract to June 2023.

There were several exits confirmed by clubs yesterday.

Manchester United's young winger Facundo Pellistri has gone to Alaves on loan to the end of the season. Tottenham Hotspur have said Maurizio Pochettino, the son of their former manager Mauricio, has joined Watford, while Wolverhampton Wanderers forward Patrick Cutrone is off to Spain, on loan at Valencia.

All you need to know about transfers