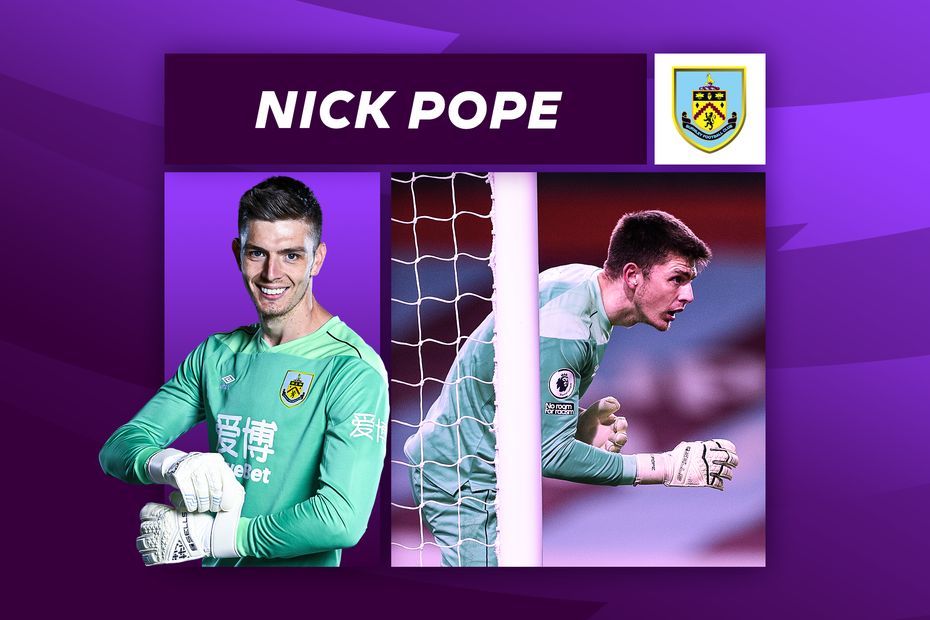 In-form Burnley goalkeeper Nick Pope will stand in the way of Manchester United’s hopes of going top of the Premier League on Tuesday.

Ole Gunnar Solskjaer’s side make the short trip to Turf Moor knowing a point will take them above leaders Liverpool after 17 matches each.

Man Utd boast an unbeaten away record this season and have scored at least twice in all seven of their Premier League outings on the road.

They will be full of confidence, but so too will Pope, who has kept three clean sheets and conceded only three goals in the last six matches.

The England international has recovered from a shaky start to the campaign by producing a series of exceptional performances.

Pope made crucial stops in tight contests with West Bromwich Albion, Brighton & Hove Albion and Crystal Palace at a time when Burnley were struggling for form.

Effectively kick-starting their season, Pope played a leading role in earning Sean Dyche's side their first five points of the campaign with his heroics in those matches.

Since then he has continued to be a resolute last line of defence as Burnley climbed the table with a run of one defeat in six matches.

Statistically, Pope has been the most influential goalkeeper in the Premier League this season.

According to Opta's xG (Expected Goals) Against metric, he should have conceded six more goals than he did.

This ranks well ahead of the 3.53 of Tottenham Hotspur's Hugo Lloris and the 2.06 of Manchester City's Ederson and is a testament to Pope's outstanding shot-stopping ability.

Brilliant at point-blank range, Pope has at times defied the odds to keep Burnley in matches.

Facing a Man Utd side who average just over two goals per match, the goalkeeper is likely to face a busy evening at Turf Moor.

The ever-reliable centre-back partnership of Ben Mee and James Tarkowski offers protection for the Burnley No 1, but his rounded skillset is a major strength too.

Indeed, no goalkeeper has a better save ratio from shots inside the box than Pope, while Emiliano Martinez of Aston Villa is the only 'keeper to have made more successful high claims.

How does Pope compare?

Pope is a quick thinker and decisive when coming off his line to tidy up attacks.

In fact, he currently tops the PL rankings for "keeper sweeps", just ahead of Liverpool's Alisson.

Burnley have put a poor start to 2020/21 behind them in recent weeks with improved performance levels in every department.

But no member of Dyche's side has made a more valuable contribution to their turnaround than Pope.

Part 1: Can Palace settle on a defence to frustrate Arsenal?
Part 2: Rodriguez return can boost Everton attack
Part 4: Brighton must watch for Gundogan's arrival in the box