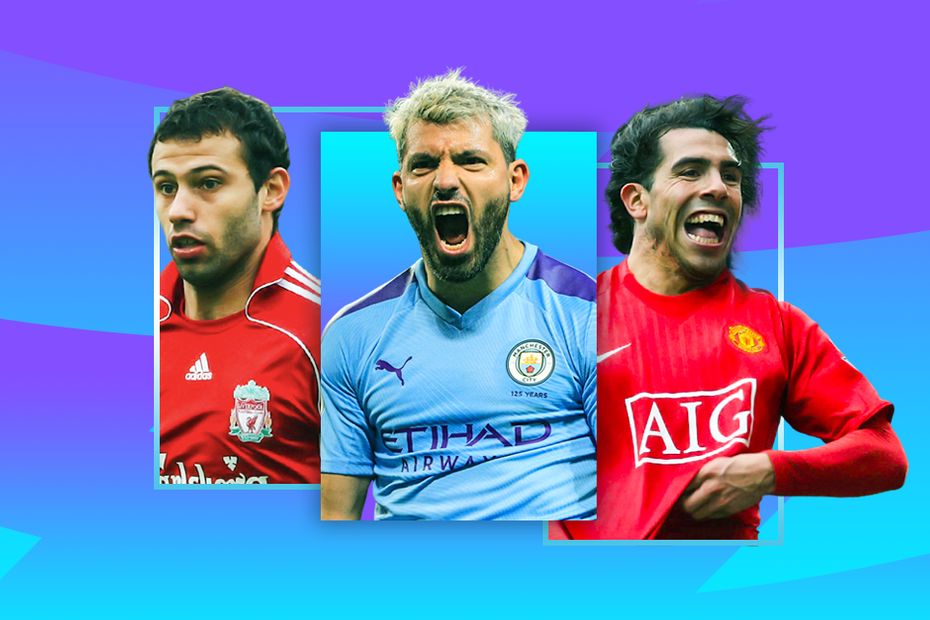 Take a look at the contributions of Argentinians in the competition, including striking greats such as Carlos Tevez and Sergio Aguero

This week, we're looking at a country that has provided star after star, year after year in the Premier League: Argentina.

The Premier League has been home to 70 different Argentinian players, making the country one of the largest contributors of foreign talent.

Prolific scorers, excellent midfielders, and defensive stalwarts have all been in abundance, with league winners, club captains and Golden Boot winners among their number.

Let’s take a look at some of the best over the years.

Top appearances and goals by Argentinians

Since the turn of the millennium, you'd be hard-pressed to find an Argentinian in the Premier League who wasn't among the competition's best players.

In 1998, Horacio Carbonari and Juan Cobian became the first players from Argentina to appear in the top flight when they made their respective debuts for Derby County and Sheffield Wednesday.

Their presence opened the floodgates for a generation of compatriots who would leave an indelible mark on the league.

The first of those were Juan Sebastian Veron and Hernan Crespo. Veron arrived at Manchester United in 2001 for a then-record transfer fee in English football and the midfielder scored in three of his first four matches, earning the September Premier League Player of the Month award.

He would go on to make 51 appearances for the Red Devils in his two seasons at Old Trafford before moving to Chelsea in 2003, where he joined up with compatriot Crespo.

Crespo's time at Stamford Bridge proved to be fruitful and consistent. The striker made 19 appearances in his first season, scoring 10 goals to help them secure a top-four finish.

Crespo would be loaned out in 2004/05, but just a year later returned to the Blues, where he would win the Premier League title and again contribute 10 goals.

While Veron and Crespo went on to become champions at Chelsea, the next cohort of Argentinians to arrive would match their success and then some.

Javier Mascherano and Carlos Tevez moved to West Ham United from Corinthians in 2006, with the latter playing a major role in helping the club avoid relegation.

More success was to follow. The duo were split up in 2007, with Mascherano heading to Liverpool and Tevez joining Man Utd.

He would go on to become one of the most dominant defensive midfielders in the game and a firm fan favourite among Liverpool fans, who saw him play 94 league matches.

Mascherano narrowly missed out on capturing a Premier League title with Liverpool before moving to Barcelona.

The Premier League Trophy would not prove so elusive for his former team-mate, however. After moving to Man Utd in 2007, Tevez made himself an Old Trafford hero by scoring 19 goals in 63 appearances and helping Sir Alex Ferguson's side win back-to-back titles.

But Man Utd soon found themselves on the wrong end of Tevez’s goalscoring prowess as, for the next four seasons the man from Ciudadela, Buenos Aires, enjoyed success with local rivals Manchester City.

After joining Sir Alex's "noisy neighbours", Tevez scored 43 goals in his first two seasons, establishing the Citizens as title contenders before they lifted the PL Trophy in May 2012.

Tevez’s PL career would come to an end after the 2012/13 campaign, after he produced an impressive 84 goals in 202 league matches.

Tevez's efforts would make a convincing argument for his being best Argentinian striker in Premier League history were it not for his Man City team-mate, Sergio Aguero.

Aguero joined City in the summer of 2011 and immediately made an impact, scoring 23 goals in 2011/12, the last of which was the iconic late winner that earned his club the their very first Premier League title.

Since then, Aguero has been an ever-present fixture at the top of the goalscoring charts. He won the 2014/15 Golden Boot, and his 180 Premier League goals make him the fourth-highest scorer in the competition's history.

With four Premier League titles and plenty left in the tank, Aguero is already one of Man City's greatest ever players, and the most decorated Argentinian to play in the competition.

While Aguero gained renown for banging them in the net, defenders Fabricio Coloccini and Pablo Zabaleta carved out reputations for keeping them out at the other end.

After arriving at Man City in 2008, Zabaleta boosted a defence that proved the cornerstone of multiple Premier League titles. The full-back was twice a PL champion and went on to make the most PL appearances by an Argentinian with 303.

Although he did not come close to Zabaleta's trophy haul, Coloccini kept 51 clean sheets in 211 appearances during a long and successful career with Newcastle United.

The impact of Argentinians has not been solely confined to inside the end lines, though. Mauricio Pochettino enjoyed great success as Southampton and then Tottenham Hotspur manager, turning the north London club into consistent top-four finishers and leading them to their first UEFA Champions League final.

And, at present, Leeds United's Marcelo Bielsa is considered one of the most innovative and revered head coaches in the modern game.

Their influence, along with a host of incredible playing talents, has ensured that the impact of Argentinians will continue to be felt in the Premier League for a long time to come.