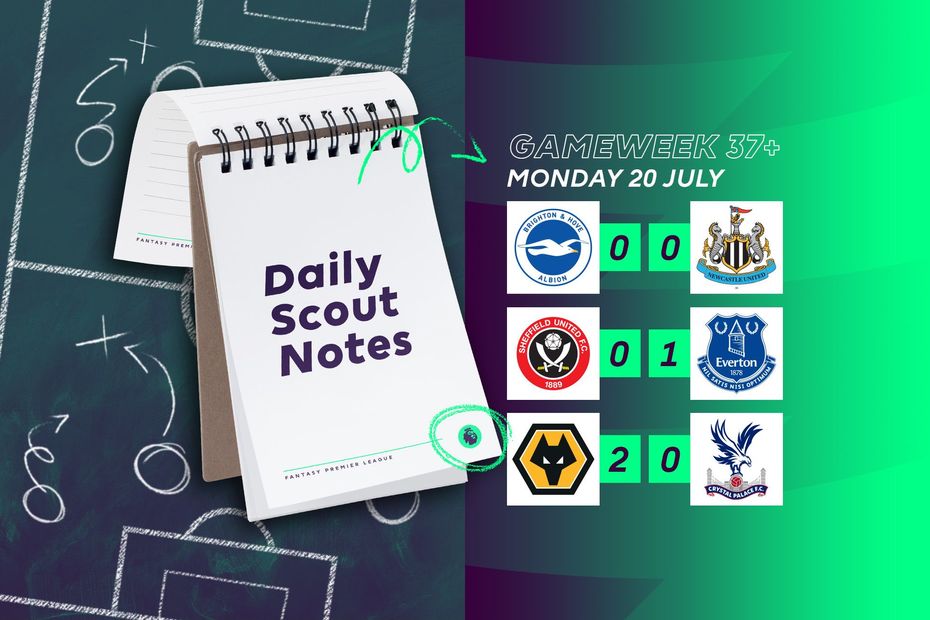 The Newcastle United wing-back has produced two goals, an assist and three clean sheets since the season restarted.

That has earned him 42 points over his six starts during that period.

However, the Magpies' home match with Liverpool in Gameweek 38+ means their key players will be of little interest to managers.

Instead, Newcastle's recent form at the back should boost Mohamed Salah's (£12.5m) captaincy appeal as he continues his quest for the Golden Boot.

Prior to their draw with Brighton & Hove Albion, Newcastle had conceded 12 goals in four matches.

Liverpool's Salah, meanwhile, has scored in each of his last four meetings with Steve Bruce's side.

For Brighton, Tariq Lamptey (£4.1m) impressed again as a cut-price source of points in defence.

The right-back has started six of the last seven Gameweeks, combining three clean sheets with an assist.

Lamptey could prove a handy option at the back for managers playing their Free Hit chips in Gameweek 38+.

The Seagulls visit Burnley on the back of some strong defensive form on the road.

Graham Potter’s side have conceded a single goal in their last four away matches, keeping clean sheets against Wolverhampton Wanderers, Leicester City and Norwich City.

Richarlison (£8.2m) scored his third goal in six Gameweeks in his side's win at Bramall Lane.

Owned by just 8.8 per cent of managers, the Brazilian's improving form could appeal to managers needing an overlooked midfielder for Gameweek 38+.

Everton host an AFC Bournemouth side who have conceded 17 goals since the restart. Only Norwich City have allowed more.

And Richarlison has been reliable at Goodison Park recently, scoring against Leicester City and Southampton in his previous three.

At the back, the Toffees offer options at both ends of the price scale for those on Free Hit chips.

Left-back Lucas Digne (£5.9m) collected his ninth clean sheet of the campaign to add to his eight assists.

Jarrad Branthwaite (£4.0m) is the cut-price pick. After featuring off the bench in the previous two Gameweeks, the young centre-back made his first start for the Toffees.

Sheffield United continue to struggle in attack, failing to score for the fifth time in their last nine matches.

That boosts the prospects of Alex McCarthy (£4.5m) and Jack Stephens (£4.4m) as budget-friendly options when Southampton host the Blades in Gameweek 38+.

Jonny scored the hosts' second at Molineux to earn his season-high haul of 14 points.

The Spaniard now has 50 points in eight Gameweeks since the season resumed.

After being rested against Burnley in midweek, Doherty returned to the starting line-up to produce his eighth assist of the campaign.

Doherty has been involved in 12 goals this season, second only to the 17 of Trent Alexander-Arnold (£7.7m) among FPL defenders.

His attacking potential suggests he could still pick up points when Wolves visit Chelsea on Sunday.

Elsewhere at the back, however, owners of Romain Saiss (£4.8m) were left frustrated after he was benched for the first time since Gameweek 16.

In attack, Raul Jimenez (£8.1m) climbed into second place in the FPL forward standings after supplying an assist.

The Mexican has now produced attacking returns in three successive matches for the first time since Gameweek 19.

Palace, meanwhile, have now lost each of their last seven fixtures.

That raises the prospects of Harry Kane (£10.9m) as a differential captain when Tottenham Hotspur visit Selhurst Park this weekend.

Also in this GW37+ series