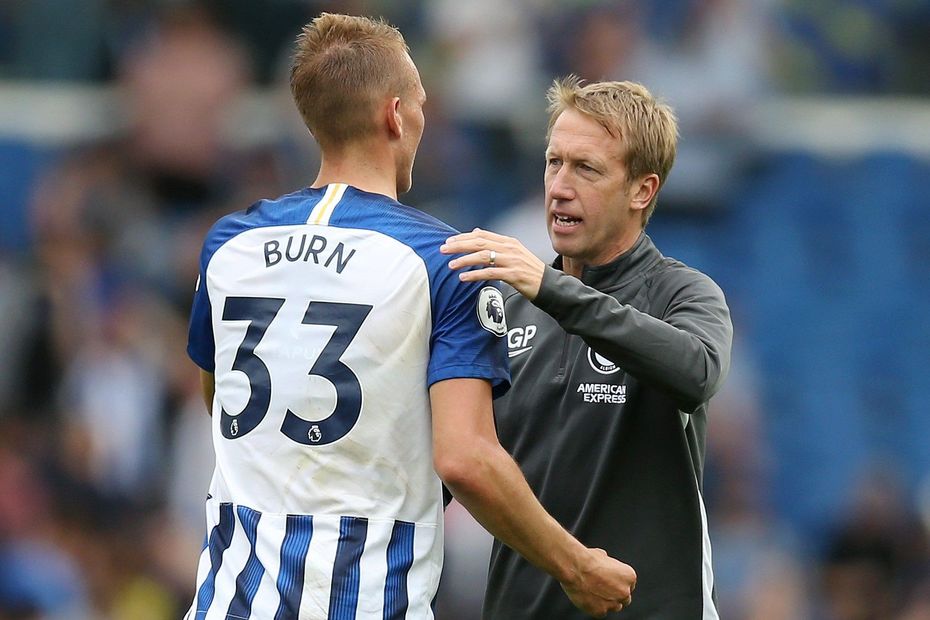 Ahead of facing Man Utd, Adrian Clarke says central defender's switch to left-back shows how head coach is getting the best out of his players

Propper: We’ll stick to our principles External Link
Iconic Moment: Brighton beat Man Utd to stay up
Burn: Facing men in Non-League helped me so much

Dan Burn and Steven Alzate, who both performed with distinction down the left side in last weekend’s 2-0 home win over Norwich City, fall into that category.

They spent the bulk of last season out on loan at Wigan Athletic and Swindon Town respectively but have since grabbed their chance to shine under Potter and will be key men at Manchester United on Sunday.

At 6ft 7in, Burn does not look like a left-back, but he has taken to his new role wonderfully after switching from centre-back.

He is comfortable moving the ball through the lines, aiming forward with an impressive 40.7 per cent of his passes, which helps Brighton’s attackers get on the ball early in the final third.

The versatile 27-year-old has also made 10 key passes and completed nine successful dribbles.

Meanwhile, his height and defensive ability are assets out of possession.

When the Seagulls need to defend narrowly or from set-pieces, and when Potter wants to switch to a back three, Burn can tuck in seamlessly.

Busy, direct and eager to get into positions where he can get shots off, the 21-year-old has shone in all three of Brighton’s successive home wins.

Last time out he played as a left midfielder, but he can also play more centrally.

He is dangerous when drifting infield from the wing and, if he starts at Old Trafford, Man Utd's players will need to communicate well and track his runs.

Potter is blessed with competition for places in forward areas, though, so Alzate may be overlooked despite his outstanding display against Norwich.

Fit-again Leandro Trossard is pushing hard for a place after providing a goal and two assists in his last two substitute appearances.

Australia international Aaron Mooy is also available after suspension, having previously been a regular in midfield, while Solly March and Glenn Murray are ready to make an impression from the bench.

This strength in depth has helped the Seagulls enormously in recent weeks. Indeed, no top-flight side have had more direct goal contributions from substitutes in 2019/20.

Combined goals and assists from substitutes

Brighton's home form has been excellent, but now they need a positive away performance.

Since beating Watford 3-0 on the opening weekend they have collected only one point from four matches on the road, scoring once, from a set-piece at Villa Park.

As he seeks to improve that record at Man Utd, Potter will be seeking to select the most effective combination of attacking players from the start.

But do not be surprised if it is one of his substitutes that makes a difference.