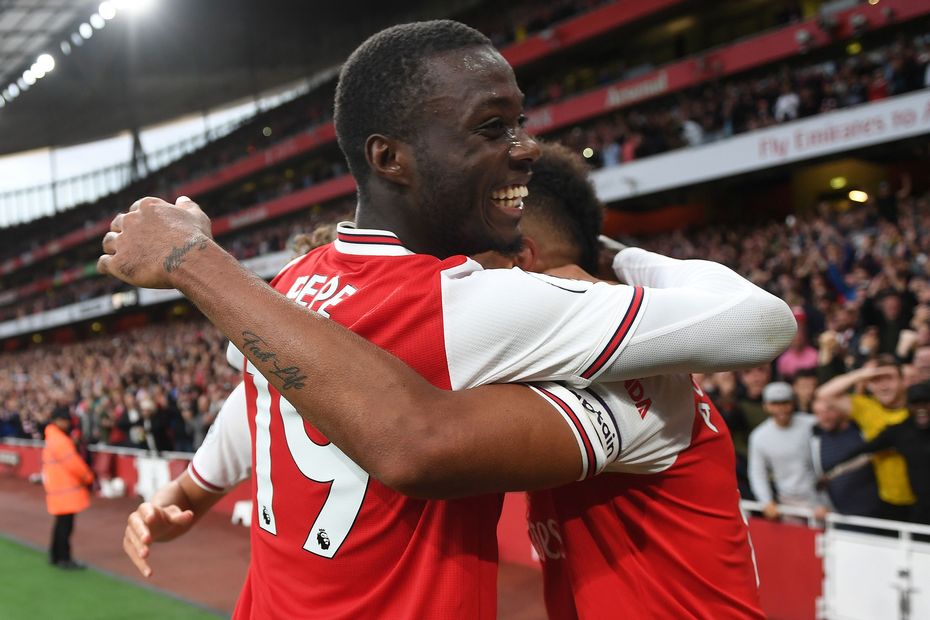 If Nicolas Pepe and Pierre-Emerick Aubameyang can strike up the right chemistry at Manchester United, it will put Arsenal in a strong position to claim their first away win at one of last season’s top six clubs since January 2015.

The talented duo have combined to good effect at the start of this campaign, but only in sporadic bursts.

During the last two matches against Aston Villa and Watford, for example, there has been very little fusion between the pair.

Without the injured Alexandre Lacazette, they have played closer to one another, but in the last 180 minutes of action they have shared just three passes.

They had previously worked more effectively in tandem, swapping a total of 13 passes against Liverpool and Tottenham Hotspur, many of which were deep inside the final third.

It is in Unai Emery’s interests to work on building a close rapport between the pair.

To date, 40 per cent of Pepe’s passes to Aubameyang have set up the striker for a scoring opportunity, and the ratio from Arsenal’s leading scorer to the Ivorian is not far behind.

The key now is to get them combining more frequently.

Once Pepe and Aubameyang become fully attuned to each other’s movement, the Gunners’ goal tally is certain to rise.

Time to make a mark

Yet in his six appearances for the Gunners the winger's record is comparatively modest. He has scored just once, from the penalty spot, while laying on one assist.

The 24-year-old has produced fleeting moments of brilliance.

His speed and footwork add a new dimension to the side when he breaks through the lines, and his ability to slip clever passes into the box is a fantastic asset.

But so far his finishing has been below par, especially given the tremendous positions he gets into.

The Arsenal winger has the skill and pace to embarrass his veteran opponent and will be a serious handful on the counter-attack at Old Trafford, but Young has experience and big-match know-how.

There is a sense around Emirates Stadium that Pepe needs one big performance to kick-start his career in north London.

If he can time that breakthrough moment for Monday night, it can be the springboard for an exciting season, both for him and Arsenal.

Opportunity knocks for Pepe at the Theatre of Dreams, and Aubameyang can help him seize the chance.