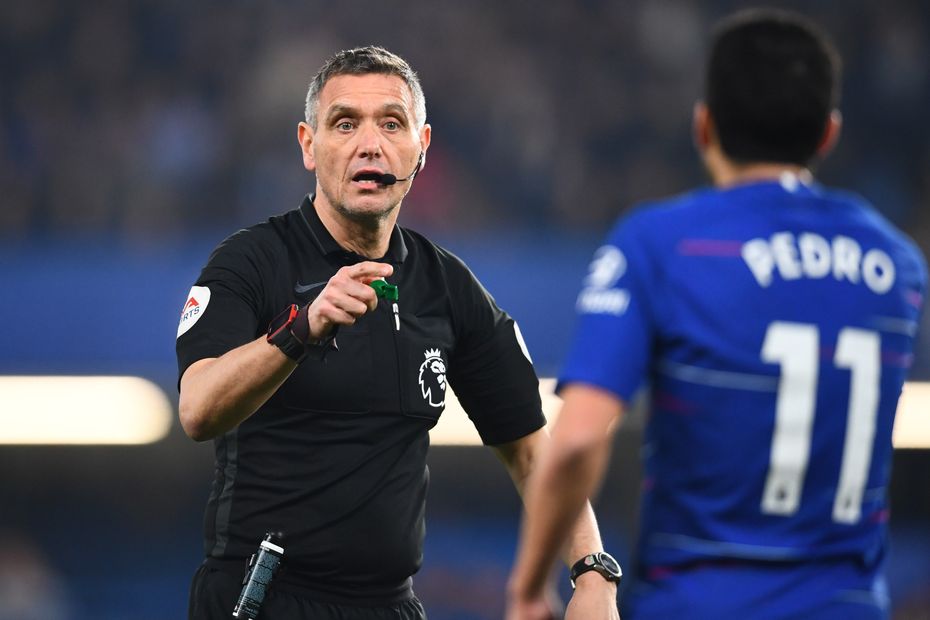 Including handballs, free-kicks and VAR, see how Premier League match officials will make decisions this season

With The International Football Association Board (IFAB) updating the Laws of the Game, we look at what has changed for the 2019/20 season.

Click on the law for more information on each one.

A goalkeeper facing a penalty ought to have at least part of one foot on the goalline or, if jumping, in line with the goalline. They cannot stand behind the line.

Referees will not signal for a penalty to be taken if a 'keeper is touching the goalposts, crossbar or net, or if these are moving, for example if a 'keeper has kicked or shaken them.

Players who win penalties and are hurt in the process will now be able to have quick treatment or an assessment and then take the penalty, rather than leaving the field.

Any team official deemed guilty of an offence can be cautioned or sent off.

If the offender cannot be identified, the card will be shown to the senior coach in the technical area, usually the manager or head coach.

Winning the coin toss before the start of a match previously meant choosing which goal to attack. But this season, captains will have the option of taking the kick-off instead.

Contested dropped balls are a thing of the past.

If play is stopped outside the penalty area and a dropped ball required, it will now be dropped for a player from the team that last touched it, where the last touch happened.

All other players must be at least four metres away.

If play is stopped inside the penalty area, the ball will be dropped for the goalkeeper.

If the ball touches the referee or another match official and goes into the goal, or results in a change of possession or a promising attack, a dropped ball will be awarded.

Any player being substituted must leave the pitch at the nearest point on the touchline or goalline.

The only exception will be if the referee indicates the player can leave quickly at the halfway line or a different point because of a safety or security issue, or due to injury.

Once substituted, the player must go to the technical area or dressing room to avoid problems with substitutes, spectators or match officials.

When there is a wall of three or more defenders, attacking players will not be allowed within a yard of it.

If one is caught standing within that area when the free-kick is taken, the referee will award an indirect free-kick against them.

Goalkeepers can also now play shorter goal-kicks and free-kicks inside their area. The ball will no longer need to leave the box before it can be played.

Opponents must still remain outside the box and at least 9.15m away until the ball is in play.

If the referee is about to show a card but a quick free-kick is taken and creates a goalscoring opportunity, the referee can delay the card until the next stoppage.

However, if the offending team has been distracted by the referee starting the procedure of issuing the card, the quick free-kick will not be allowed.

For an offence that denies an obvious goal-scoring opportunity, the player will be cautioned rather than sent off because the attack was restarted.

A goal scored or created with the use of the hand or arm will be disallowed even if it is accidental. The handball rule does not consider intent by a player.

If the ball hits a player who has made their body "unnaturally bigger" then a foul will be awarded.

IFAB says having the hand/arm above shoulder height is rarely a "natural" position and a player is "taking a risk" in that scenario, including when sliding.

But it is considered natural for a player to put their arm between their body and the ground when falling, so long as the arm is not extended to make the body bigger.

Players will be allowed extra leeway when it comes to ricocheted handballs, when the ball has deflected off their own head/body/foot or that of a nearby player.

Every match will have a VAR, a qualified referee watching the match via screens.

The VAR will constantly monitor the match but will be used only for "clear and obvious errors" or "serious missed incidents" in four match-changing situations:

If the VAR thinks the actions taken by the on-field match official team is clearly and obviously wrong in those four key areas, they can communicate with the referee via radio.

The final decision will always be taken by the on-field referee. The VAR only provides advice.