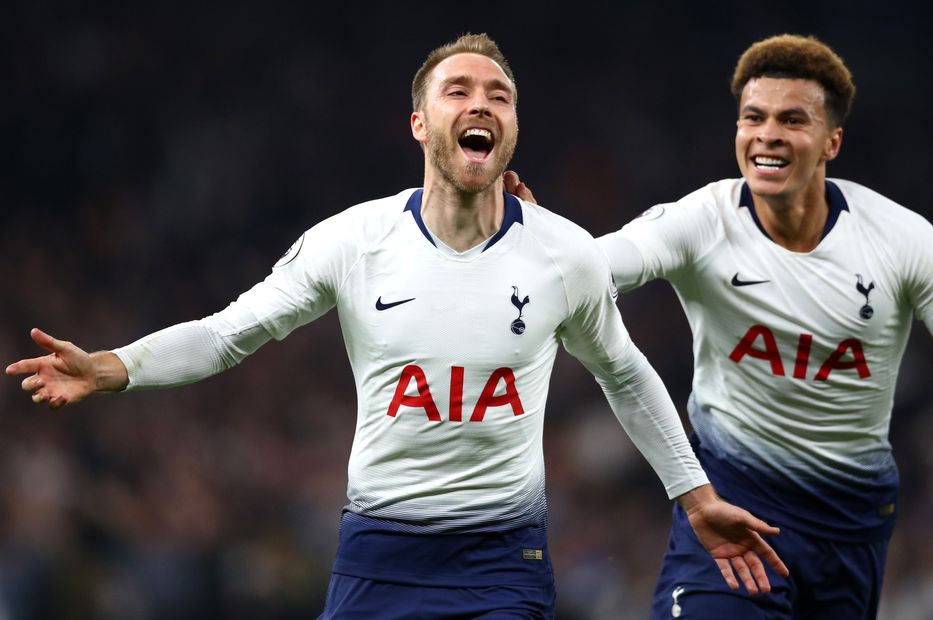 The influence of Christian Eriksen is increasing just when Tottenham Hotspur need him most.

The Dane has scored two and assisted five goals in his last seven appearances in all competitions.

This included a superb 88th-minute winner against Brighton & Hove Albion in midweek that kept Spurs in pole position for a top-four finish.

That goal came after the Dane had provided an assist in each leg of Spurs’ UEFA Champions League quarter-final win over Manchester City.

He is not a winger, but Eriksen is arguably the best crosser in the Premier League.

When he has got into areas that offer him an angle to deliver balls into the area, his quality with both feet has been exceptional.

This is why operating in a three-man midfield, or within a 4-4-2 diamond that Spurs have used recently, suits him.

By collecting the ball from a deeper position in those wide channels, it allows Eriksen possession in space between full-backs and midfielders.

From there the 27-year-old can pick out an early cross or make bursts towards the wing, threatening with a precise delivery from a wider angle.

No Premier League player who has attempted at least 40 crosses this season has a better accuracy rate than Eriksen.

Only Eden Hazard, with 13, has set up more goals than Eriksen’s 12 in the race for this season's Cadbury Playmaker award.

Eight of Eriksen's assists have been crosses, with five coming from open play and three from set-pieces.

But what is most impressive is that Eriksen's eight assists from crosses have been to six different players: Erik Lamela, Eric Dier, Dele Alli, Lucas Moura, Davinson Sanchez and Harry Kane.

The underlying statistics show further his importance to Mauricio Pochettino.

As the table below shows, Eriksen is by far Spurs’ top creator of chances both in open play and from set-pieces.

Pleasingly for Pochettino, the midfielder has also rediscovered his goalscoring touch.

Up until mid-December Eriksen had not scored in the league. But he now has seven for the campaign.

Three were with his left foot, while remarkably five goals have come from outside the box.

Indeed, since his PL debut in September 2013, Eriksen’s tally of 21 goals from outside the box is the highest number in the competition.

Eriksen is a game-changing talent and is Tottenham Hotspur's main man to deliver points while Kane is injured.

Containing him will be of paramount importance to his opponents on Saturday, West Ham United.