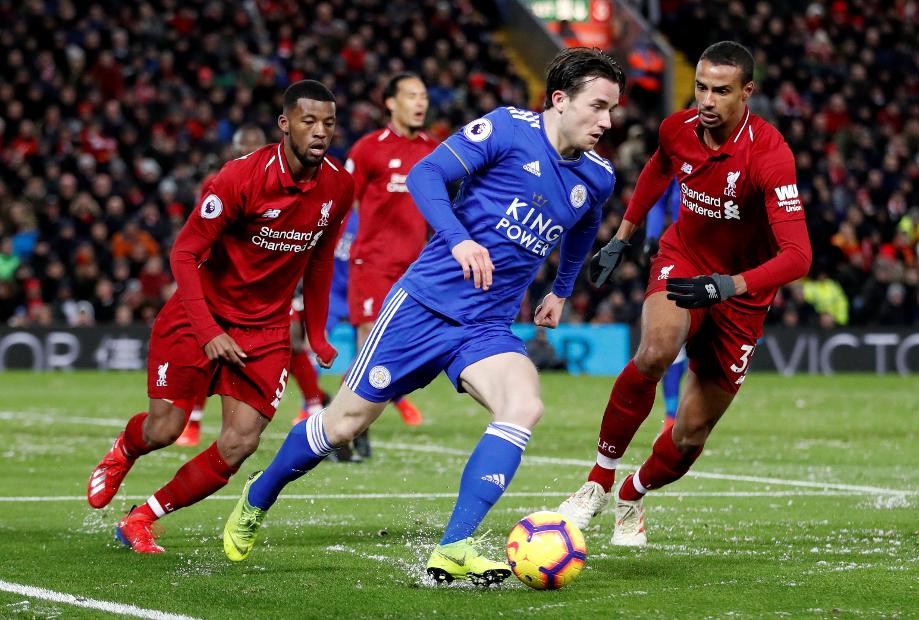 Man Utd ‘Expect To Win Against Anyone’ External Link

He had been seen by many as a wing-back, but Ben Chilwell has shown in 2018/19 that as a traditional left-back for Leicester City he is among the best in the country.

The Academy graduate has made 22 of his 23 starts on the left of a flat back four for Claude Puel this term.

In that role Chilwell has established himself as a regular at King Power Stadium, but also a member of the England team.

One standout feature of Chilwell’s development is his positioning off the ball.

Leicester remain more comfortable as a counter-attacking side, which requires their back four to sit deep and defend for long periods.

Chilwell's performance at Anfield on Wednesday evening was a fine example of the strides he has made from being an attacking wing-back.

Tucking in to cover Harry Maguire when his team needed him to act as a third central defender, Chilwell made an incredible 16 clearances.

When Manchester United visit King Power Stadium on Sunday, Ole Gunnar Solskjaer may select Romelu Lukaku as a right-sided forward, as he did with success against Arsenal in the FA Cup.

If so, Chilwell's defensive abilities will be tested again.

When Leicester get on the front foot, the 22-year-old’s attacking strengths come to the fore. He is one of the Foxes’ most productive players.

Chilwell has impressive pace and the skill to go past opponents.

Statistically, his output from open play ranks him as the fourth-most creative left-back in the division, with 19 key passes this season.

Pushing on to deliver crosses and decisive passes, Chilwell has stepped up well in the absence of last season’s most inventive Leicester player, Riyad Mahrez.

Without a regular left winger with whom to combine - Marc Albrighton, James Maddison, Gray and Harvey Barnes have all been used there – the energy and width he supplies is of vital importance to the team.

No matter who plays on Man Utd’s right on Sunday, Chilwell will face another stern examination of his defensive skills.

But in a breakthrough campaign, he has proved that he will be up to the task.

Part 1: Winks and Longstaff ready to show their talents
Part 3: Why Laporte has won Guardiola's trust