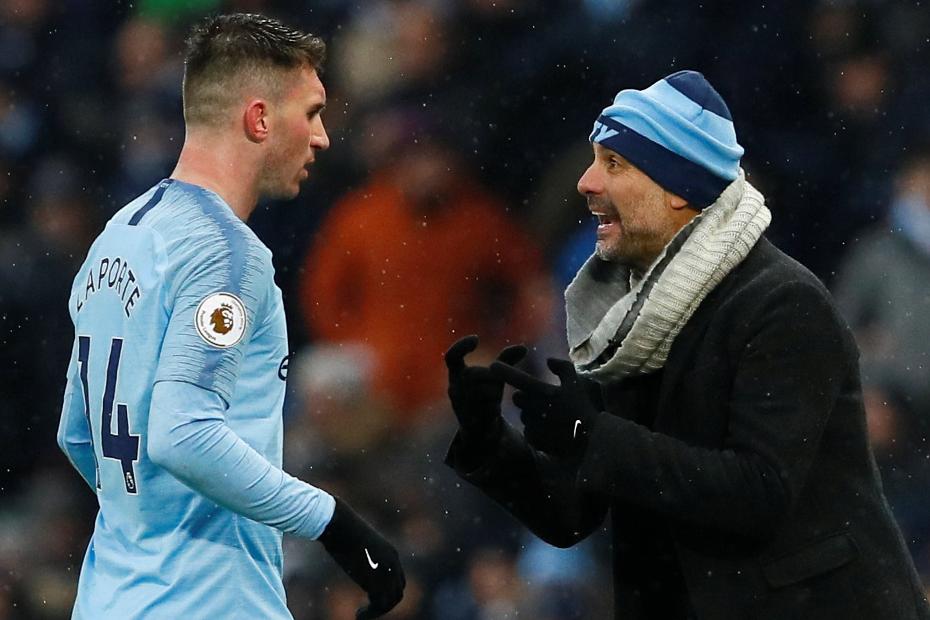 Laporte: We will fight until the end External Link

In a seemingly effortless manner, Aymeric Laporte has developed into one of Manchester City’s most important players during his first full season in English football.

Pep Guardiola described the 24-year-old earlier in the season as the best left-footed centre-back in the world.

With his manager’s full trust, Laporte has featured for more Premier League minutes than any other outfield player at City in 2018/19.

But it is his left foot that makes him the first name on the City team sheet.

Suited to the left side of a centre-back pairing, Laporte distributes the ball quickly and with the minimum of fuss.

The balance he provides is critical to Guardiola’s philosophy of passing through the lines at speed.

Laporte’s dependability is even more impressive when you consider how many changes in partner he has had to deal with.

Across his 23 Premier League starts, the Frenchman has featured alongside nine different combinations of players on his inside and outside in the City defence.

Partnerships are extremely important for defenders, but Laporte has not been able to build up a consistent rapport with those closest to him.

If Guardiola is in a position to use the same back four for a string of matches during the run-in, don’t be surprised if Laporte’s standards rise further.

Sunday’s match at home to Arsenal represents an interesting challenge for Laporte.

Alexandre Lacazette and Pierre-Emerick Aubamyang are two of the division’s most dangerous strikers and travel to the Etihad Stadium in decent form.

Both strikers often occupy spaces down the right of the Arsenal attack, so Laporte will need to be switched on to handle their movement, especially on turnovers.

Laporte enjoys joining in with City’s build-ups and is not afraid to push into the opposition half.

Danger of being caught

But if Guardiola’s men lose the ball and their key centre-back is caught in an advanced position, Aubameyang and Lacazette may cause them problems.

At 24, Laporte’s all-round game should continue to develop.

It may be too early still to label him one of the best defenders in world football, but he has the potential to reach that level.

Should he stifle Arsenal’s all-star attack on Sunday, it will be another step in the right direction.