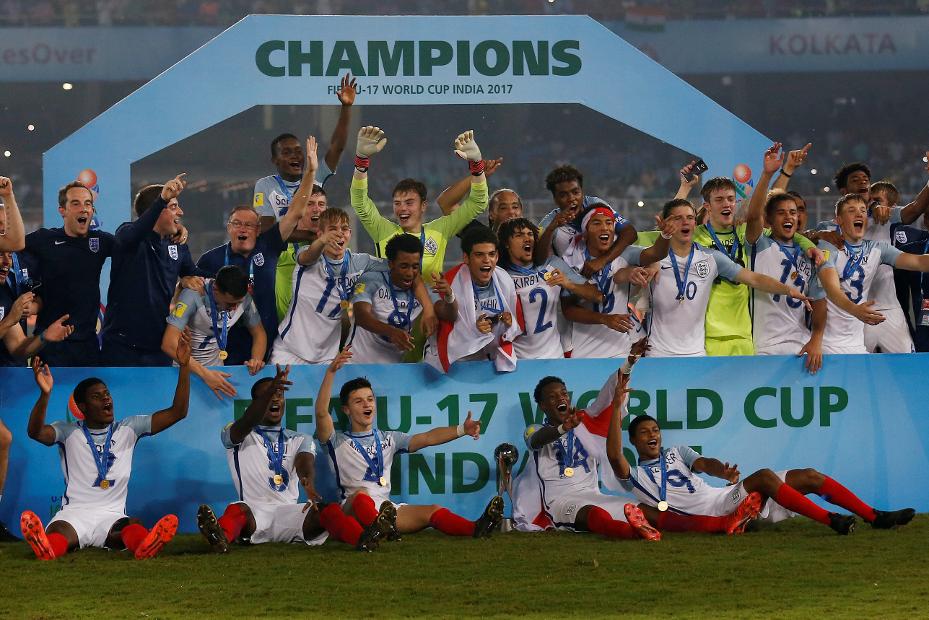 Twelve months since the Young Lions' World Cup triumph, we look at a group that has already produced four Premier League players

Twelve months ago England capped off a successful year at youth level by winning the FIFA Under-17 World Cup, beating Spain 5-2 in the final in India.

Manchester City's Phil Foden and Wolverhampton Wanderers' Morgan Gibbs-White were among the scorers in the final, for an England squad including 19 players blooded in the Premier League's Games Programme as well as at The FA's St George's Park.

Four players from the group have since made their PL debuts, while City youth product Jadon Sancho earned his first cap for England after impressing for Borussia Dortmund.

We look at the progress of that World Cup-winning group in the 12 months since their triumph.

Curtis Anderson (Manchester City)
Has made five Premier League 2 appearances this season as well as being on the bench in the Checkatrade Trophy.

Josef Bursik (Stoke City)
Now in the England Under-19 squad and is playing for Evo-Stik Premier Division side Hednesford Town on loan.

Steven Sessegnon (Fulham)
Named on the bench for the PL match v Arsenal, he has also made two Carabao Cup appearances in 2018/19.

Joel Latibeaudiere (Man City)
The centre-back is now a regular in City's PL2 side.

Marc Guehi (Chelsea)
After helping Chelsea win the U18 Premier League and U18 PL Cup last season, Guehi is now in the PL2 team.

Jonathan Panzo (Monaco)
Panzo signed for Monaco from Chelsea's U18s in the summer and has made three UEFA Youth League appearances.

Timothy Eyoma (Tottenham Hotspur)
Now a starter in Spurs' Under-23 team, Eyoma made his senior debut in pre-season.

George McEachran (Chelsea)
Made 10 appearances at U23 level in 2018/19 and now an England U19 international.

Nya Kirby (Crystal Palace)
Part of Palace team who won the Professional Development League South Division and named on the bench in the PL in 2017/18. He helped England reach the UEFA U19 Championship semi-finals this summer.

Angel Gomes (Man Utd)
A regular in PL2 where he has three goals in seven matches this season.

Morgan Gibbs-White (Wolves)
Helped Wolves to promotion and made four PL appearances in 2018/19.

Phil Foden (Manchester City)
After making PL debut in December 2017, played five times as City won the PL title. This season, he has made three PL appearances, scored his first senior goal in the Carabao Cup, appeared in the UEFA Champions League and made his England U21 debut.

Callum Hudson-Odoi (Chelsea)
Made his first two PL appearances in 2017/18. This term, he has featured in the FA Community Shield and the UEFA Europa League win over BATE Borisov.

Emile Smith-Rowe (Arsenal)
Made his competitive senior debut this season, against Vorskla Poltava in the UEFA Europa League. Has since scored his first senior goal and been a substitute in two league matches.

Jadon Sancho (Borussia Dortmund)
Signed last summer, Sancho made his senior England debut against Croatia in the UEFA Nations League. He has four goals and six assists for the Bundesliga leaders this season as well as scoring in the UEFA Champions League.