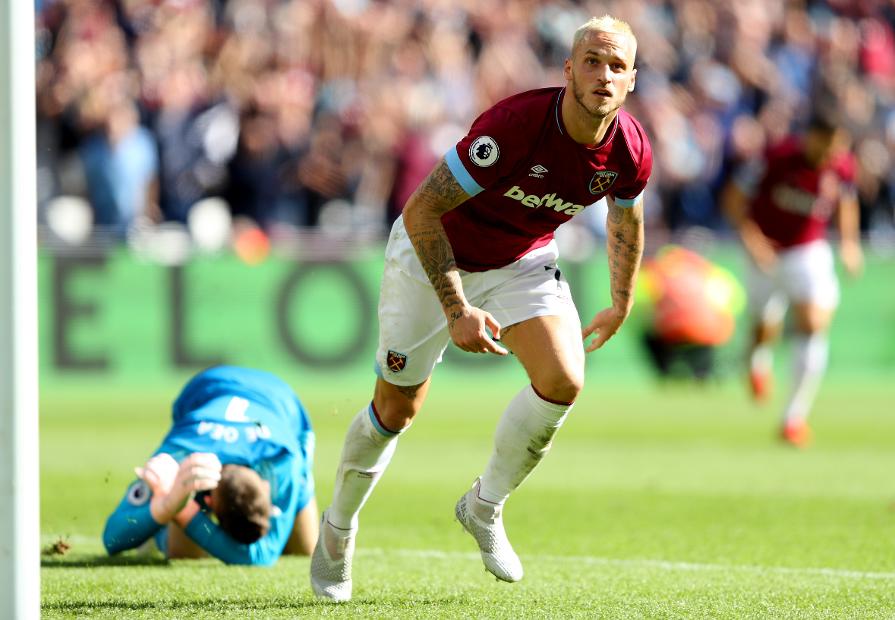 Arnautovic: The fans deserved that win External Link
GW8 Ones to watch: Marko Arnautovic
Shearer: Anderson will get fans off their seats

Marko Arnautovic’s transformation from wide man to centre-forward is just about complete.

Still less than a year on from the first time West Ham United deployed him in a lone front role, the Austrian looks every inch the Premier League striker.

He makes well-timed runs, resists the temptation to wander towards the flanks and has simplified his game to ensure he holds the ball up for team-mates.

Having scored four goals already this term – three from open play – the Hammers star will be the man Brighton & Hove Albion most fear on Friday night.

It is clear Arnautovic is hungry to succeed as a principle centre-forward.

He makes sharp runs in behind or down the side of defenders and has shown the desire to close down opponents with intensity.

The stats reflect as much: Arnautovic is West Ham’s leading sprint-maker.

Arnautovic’s strikes against Everton and Manchester United arrived on the back of bursts of pace that took him beyond his markers.

Having learned how to use his natural power to his advantage, he has become a nightmare to play against.

Arnautovic has all the attributes that frighten defenders. He has the skill to drop short and turn, is a threat in the air, has the strength to hold off physical attention and boasts the speed to exploit a high line.

This mix creates uncertainty among those assigned to mark him.

This perhaps explains why the Austrian has been able to pin defenders back into their own penalty area to such outstanding effect in 2018/19.

So worried are they by his pace that they drop deeper, but in those scenarios the signing from Stoke City can hang on to the ball effectively.

In a West Ham side who were struggling for the first four weeks of the season, it is remarkable how many touches Arnautovic has managed inside the penalty area.

Manuel Pellegrini’s summer additions have also had a positive effect on Arnautovic’s game.

Flanked by Felipe Anderson and Yarmolenko, two players who are always looking to link up with him inside the final third, he has received good service.

Anderson has found Arnautovic with 25 successful passes, 10 ahead of the next closest team-mate Yarmolenko, with Mark Noble two behind on 13.

The Brazilian has also created three chances for his centre-forward, the highest of any player in the squad.

Brighton manager Chris Hughton will be aware that Arnautovic is one of the Premier League’s top strikers at the moment.

His minutes-per-goal ratio is comparable with the division’s best and that, coupled with his unpredictable movement, makes him a serious threat under the lights at the Amex Stadium.

With the Hammers playing with more confidence, Arnautovic must be closely watched.