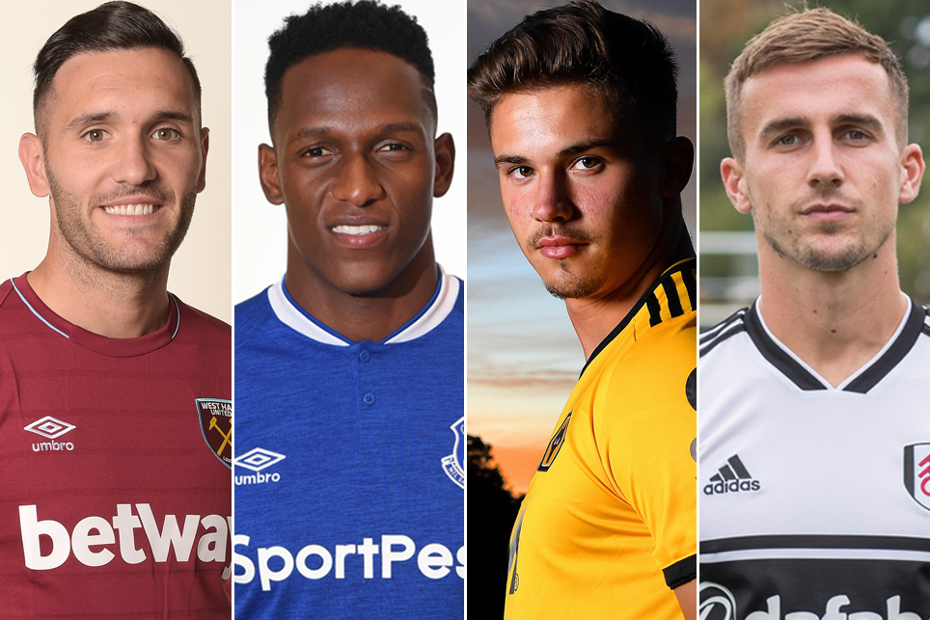 It has been a busy final of the 2018/19 Premier League summer transfer window with many signings made.

How the day unfolded

20:37 Andre-Frank Zambo Anguissa is the latest arrival at Fulham. The 22-year-old leaves Marseille for an undisclosed fee. (Details)

20:36 Southampton have signed Danny Ings on a season-long loan from Liverpool, ahead of a permanent move next summer. (Details)

20:05 Everton have doubled up with the signings of Yerry Mina and Andre Gomes from Barcelona. Centre-back Mina, who scored three goals in Colombia's run to the last 16 of the 2018 FIFA World Cup, joins on a five-year deal for an undisclosed fee. (Details) Portugal midfielder Gomes arrives on loan for the 2018/19 campaign. (Details)

20:00 Fulham's busy Deadline Day continues with the signing of Manchester United defender Timothy Fosu-Mensah, who joins on loan for the 2018/19 season. (Details)

19:50 Crystal Palace have signed Jordan Ayew from Swansea City. The 26-year-old forward has moved to Selhurst Park on a season-long loan. (Details)

19:30 Watford have announced the signing Domingos Quina on a four-year contract. The 18-year-old attacking midfielder joins from West Ham. (Details)

19:10 The deals keep coming for Fulham. Now Luciano Vietto, a 24-year-old forward, has joined on loan from Atletico Madrid in their third deal of the day. (Details)

19:00 This is the final deadline by which transfers requested through deal sheets need to be completed. Brighton & Hove Albion have sealed a signing in time, announcing the capture of right-back Martin Montoya from Valencia. The 27-year-old's transfer is subject to international clearance. (Details)

An International Transfer Certificate (ITC) is required 75 minutes before kick-off of a match in order for that player to be eligible for selection.

18:35 Newcastle United have announced the signing of Federico Fernandez. The 29-year-old defender has agreed a two-year deal, joining for an undisclosed fee from Swansea City. (Details)

18:30 Cardiff have brought in midfielder Harry Arter from AFC Bournemouth. The 28-year-old has joined on a season-long loan. (Details)

18:15 Leicester have reached an agreement with Freiburg for defender Caglar Soyuncu. The 22-year-old has agreed a five-year deal for an undisclosed fee. His move is subject to a work permit being granted. (Details)

17:45 Fulham are not yet done. Joe Bryan has moved to Craven Cottage from Bristol City. The 24-year-old left-back has agreed a four-year deal. (Details)

17:30 The transfer window closed 30 minutes ago, but, remember, clubs can still complete signings by submitting deal sheets. The deal sheet allows a club to confirm that a deal has been reached to allow for additional time to submit the remaining documentation. It needs to arrive fully completed before the transfer window closes and once it arrives, clubs have until 19:00 to submit the full paperwork. A number of sheets have been submitted so further deals could be done.

17:25 Another signing for Fulham as Sergio Rico, the Sevilla goalkeeper, joins on loan for the season. (Details)

17:15 Huddersfield Town manager David Wagner has been explaining his signing of Isaac Mbenza, the 22-year-old attacker. "He’s a very quick winger with a direct style of play, which is exactly what we were looking for," Wagner told Huddersfield's official website.

17:10 Sanchez, 32, has moved to West Ham on a two-year deal and returns to the Premier League after a two-year spell with Aston Villa. "I decided to come here because, first, it is the Premier League, second, it’s a beautiful club and the fans are always helping the club and, third, for me it’s an amazing opportunity and an amazing project the club are leading, being ambitious and keen to achieve good things," the defensive midfielder told West Ham's official website.

17:05 And a few transfers have been rushed in just after the window has shut. West Ham have announced the arrival of Carlos Sanchez from Fiorentina, while Huddersfield Town have brought in Isaac Mbenza on loan from Montpellier.

17:00 Brighton & Hove Albion have agreed a deal for Wigan Athletic defender Dan Burn. The 26-year-old has agreed a four-year deal but will return to Wigan on loan until January. (Details)

16:47 Everton have announced the signing of Bernard on a four-year deal from Shakhtar Donetsk. The 25-year-old Brazil attacking midfielder said the Toffees head coach was one reason why he joined. "I chose Everton because of all the things I had heard about Marco Silva and after speaking to him I was happy with what he said to me," Bernard told evertontv. (Details)

16:10  Chelsea signed Kepa Arrizabalaga last night from Athletic Bilbao and the goalkeeper has talked to media today about adapting to life in the Premier League. "It’s true the English game is different but I have a lot of friends, other Spanish players, already playing in the English Premier League and they’ve given me fantastic references about playing here," the 23-year-old told Chelsea's official website.

14:30 Wolverhampton Wanderers have brought in Leander Dendoncker from Anderlecht. The 23-year-old Belgian, who can play in midfield and defence, has joined on an initial season-long loan, becoming a permanent deal next summer. (Details)

12:10 Manchester United open the 2018/19 Premier League at home to Leicester tomorrow at 20:00. These two sides will have to have registered any new players before midday today for them to be eligible to play at Old Trafford tomorrow. United manager Jose Mourinho has played down his club’s prospects of adding to his squad.

"I'm not confident and the market closes today," he told Man Utd’s official website. "So it's time - at least for me - to stop thinking about the market because the market will be closed, so I will have to focus on the players I have in relation to this first couple of matches."

10:50 Leicester City have agreed a deal for Filip Benkovic from Dinamo Zagreb. The 21-year-old central defender scored four goals from 30 appearances last season and has joined on a five-year deal, subject to international clearance. (Details)

10:33 West Ham United have announced the signing of Lucas Perez from Arsenal. The 29-year-old forward has signed a three-year deal. (Details)

10:10  Chelsea announced a couple of signings yesterday evening, with goalkeeper Kepa Arrizabalaga joining on a seven-year deal from Athletic Bilbao and Mateo Kovacic, the Real Madrid midfielder, set to move to Stamford Bridge on a season-long loan. The Kovacic deal has now been confirmed by Chelsea. (Details)

09:30 A reminder that while the window closes for Premier League clubs at 17:00 BST today, they can still loan out players to EFL clubs until 17:00 BST, 31 August. They can also loan or sell players to clubs outside England in national leagues whose transfer windows are still open. (See: European Transfer Windows)

08:30 Manchester City have announced the signing of 19-year-old Daniel Arzani from Melbourne City. The attacking midfielder was part of Australia's 2018 FIFA World Cup squad and will be loaned out, City say. (Details)