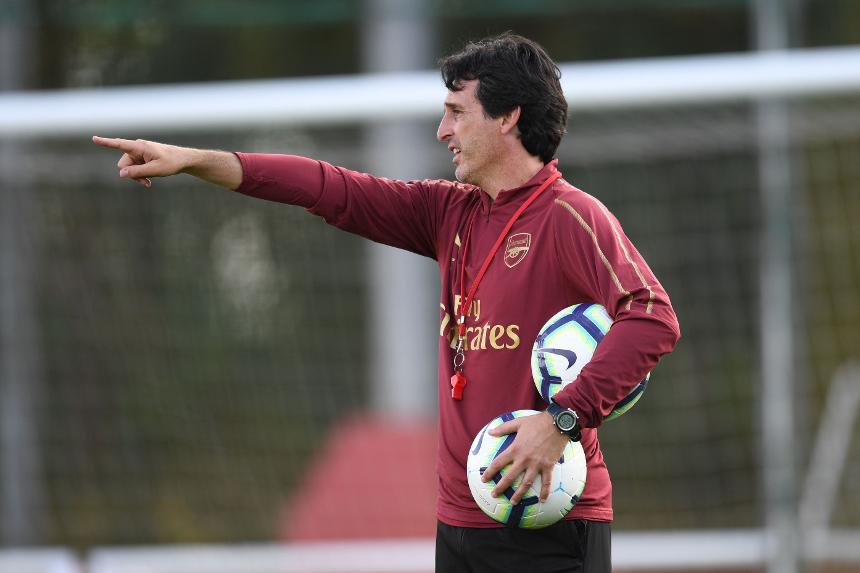 Emery on his first XI and the transfer deadline External Link

If there is one thing Arsenal need to improve most this season it is their structure.

In terms of shape and tactical discipline, Arsenal were too loose last season.

This was reflected in a poor away record, the 11th best in the division with just 16 points. This was half the haul managed by Liverpool, their next-closest top-six rivals.

Emery favours a 4-3-3 or 4-2-3-1 system and is currently working very hard to instill a more solid framework.

During pre-season Arsenal have looked well organised without the ball and in possession.

Conforming to Emery's demands, there does appear to be more structure to the team's general play.

Emery has talked a lot about the importance of pressing since he began working with his new players this summer.

He likes his forwards to close down defenders and for two members of his three-man midfield to push on and engage their direct opponents, too.

Pressing is one area where Arsenal slipped backwards last season.

Alexis Sanchez, Alex Oxlade-Chamberlain, Francis Coquelin and Theo Walcott were all among Arsenal's best performers in this department, so their departures last season were felt.

The key now is for Emery to ensure his current forwards and midfielders learn to press at the right times and in a coordinated manner.

Winning the ball back inside the middle third has also been an ongoing issue that needs fixing.

Arsenal were ninth last term, the lowest of the top six clubs, and eighth the year before in this area. They have desperately missed a ball winner and a focus on their off-the-ball shape.

The arrival of the tenacious Lucas Torreira, coupled with Emery’s influence, should help change this pattern.

While I believe we could see rotation between a 4-3-3 and 4-2-3-1 formation depending on the opposition, Emery has some difficult decisions to make on the configuration of his strongest XI.

Alexandre Lacazette, Henrikh Mkhitaryan and Granit Xhaka are the three senior players who may be affected most by the choices their new head coach makes.

How to bring the best out of Pierre-Emerick Aubameyang and Mesut Ozil is at the crux of Emery's thought process.

He will want to use Lacazette and Aubameyang together as often as possible, but this means stationing Aubameyang on the left side of his attack.

Clever interchanging of positions between the pair can make this work, as we saw last season, but in a 4-3-3 that would potentially leave no place for the talented Mkhitaryan.

The other option is to leave Lacazette on the bench, and use him as an impact substitute.

Ozil would be happy operating wide in a 4-3-3 because much of his creativity comes down the channels anyway.

He is less comfortable tracking back to defend though, so Arsenal would need a central midfielder such as Aaron Ramsey to shuffle across to lend support on a regular basis.

Ozil would be most comfortable in a 4-2-3-1 as the No 10, but, in that formation, one of Arsenal’s influential central midfielders would have to drop out. Away from home this is an unlikely choice.

This system may be seen in home matches more often, against sides who will go to Emirates Stadium with a defensive mindset.

There is plenty of work for Emery to do, but the early signs suggest he is well aware of his team’s previous shortcomings.

That is why the acquisitions of Torreira, Sokratis Papastathopoulos and Stephan Lichtsteiner have added grit to the squad.

Emery's approach will be fascinating to watch in the coming weeks.

Part 1: Everton can go the distance under Silva
Part 2: Pellegrini will bring back flair to West Ham