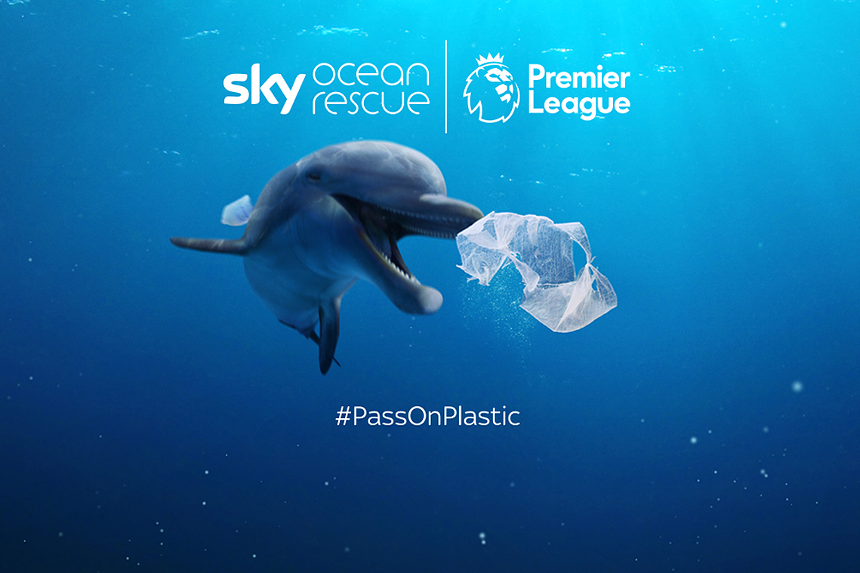 More than eight million tonnes of plastic is thrown away each year and washed out to sea.

It takes centuries to break down and is eaten by marine creatures. It also finds its way back into the food chain.

That is why the Premier League and Sky are working together to use their global reach and appeal to raise awareness of the environmental issues caused by plastic.

The Premier League and Sky will promote Sky Ocean Rescue to inspire Premier League clubs and fans across the world to take positive action and reduce their single-use plastic intake, making small changes that will have a big impact.

Clubs will be provided with support and guidance on how they can phase out single-use plastic from their stadiums and operations.

They will be supported by the "Sky Ocean Rescue Ninjas", a specialist team of plastics experts dedicated to helping businesses reduce their single-use plastic usage.

In the future, single-use plastic litter at matches could be a thing of the past.

Fans in the UK will hear all about the new partnership on Sky’s Monday Night Football coverage of Tottenham Hotspur versus Watford.

This will include a takeover of Wembley and an appearance by “Plasticus”, the famous Sky Ocean Rescue whale, made from 250 kilograms of recycled single-use plastic, the same amount dumped in our oceans every minute.

One club leading the way is Spurs, whose new stadium will be free from plastic straws, stirrers, cutlery and its retail outlets will phase out standard 5p carrier bags.

Ahead of the match Spurs' Harry Kane and Christian Eriksen took on their manager Mauricio Pochettino and his assistant Jesus Perez in a shoot-out to knock down plastic bottles at the Spurs training ground.

“We are extremely proud to be joining Sky Ocean Rescue in the fight to save our oceans,” said Richard Scudamore, the Premier League's executive chairman.

“As an organisation with a global audience we, and our clubs, are able to encourage people around the world to think and take positive action to reduce their use of plastic.”

Barney Francis, managing director of Sky Sports, stated the company’s pride at the momentum created since Sky Ocean Rescue started just over a year ago.

“We’ve already reached millions of people, inspiring them to make simple everyday changes to help save our oceans,” Francis said.

“Football has a unique ability to reach billions across the world, and I’m delighted that the Premier League and its clubs are getting involved to further build on our campaign.

"Today we’re calling on football fans to make a simple change and join us to help stop our oceans drowning in plastic."