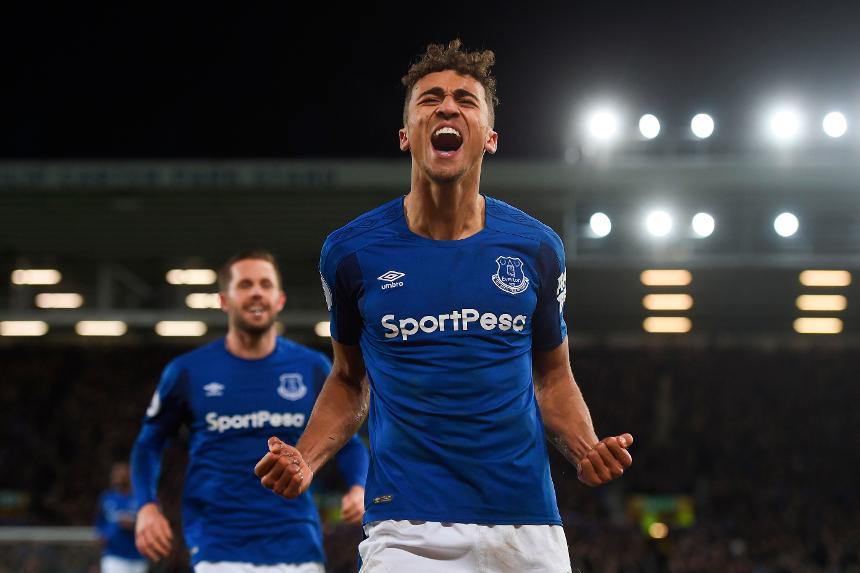 Sigurdsson: We Know What This Means To Evertonians External Link

Can Sam Allardyce inspire a statement performance from Everton in his first taste of the Merseyside derby?

Adrian Clarke picks out a homegrown star who will be central to the Toffees' hopes of a first success at Anfield since 1999.

To contain Liverpool’s outstanding forward line it’s clear Everton will need to retain an immensely tight shape without the ball, squeezing the space in which Philippe Coutinho, Sadio Mane and Mohamed Salah like to operate.

Getting their distances right between the lines, and from their back four to their goalkeeper, is an absolute must.

However, it is also imperative Everton ease pressure on their defensive players by offering a genuine threat at the other end of the pitch.

And in Dominic Calvert-Lewin they have a player who can give Liverpool headaches on Sunday.

Pace on the break

The 20-year-old offers tremendous pace on the counter-attack.

Officially the quickest player on Everton's books, Calvert-Lewin will naturally look to run in behind his markers.

That was in evidence when he latched on to a Wayne Rooney pass to score last time out against Huddersfield Town.

In the previous match one of his razor-sharp darts in the box earned his side a penalty when Joe Hart tripped him, and later on in the same match it was the youngster’s willingness to chase a through-ball that forced the Hammers keeper to rush a clearance that Rooney then slammed home from distance.

By deploying the 20-year-old as the main centre-forward at Anfield, Allardyce will get guaranteed work-rate, exceptional pace and the dynamism to trouble Liverpool’s centre-backs on transitions.

Standing a rakish 1.87m (6ft 1in), Everton’s new kid on the block does not immediately come across as a natural target man, but he is proving himself to be one of the best in the Premier League.

From an aerial perspective he has been a revelation during the past couple of weeks.

Everton have been encouraged, first by David Unsworth and now by Allardyce, to hit longer passes from back to front in the striker’s direction during the last three matches.

Jordan Pickford, the goalkeeper, has made the most number of successful passes to Calvert-Lewin in that period, with a total of 67 balls aimed towards Calvert-Lewin’s head.

With a great spring in his leap, Calvert-Lewin has proven to be a handful for opponents, heading passes down to team-mates or flicking the ball on accurately.

His heading statistics are remarkable.

Calvert-Lewin has won more aerial battles than any other PL player, leapfrogging Shane Duffy and Christian Benteke thanks to recent performances, and is also ranked fifth in the division for flick-ons, headed passes and headers at goal.

These numbers are truly excellent for a player who has only started two-thirds of Everton’s matches.

He provides qualities no one else in Allardyce’s squad can deliver.

Everton in the air

So when Everton are attempting to relieve pressure by going early from back to front on Sunday, or when they are seeking to counter at speed, look closely at how Calvert-Lewin performs.

He may be a youngster, but for Everton he is a key man this fixture.

Aside from offering speed, finishing ability, and power in the air, he also happens to be Everton’s most productive goal-maker this season with four assists.

If Everton are to pull off a shock victory at Anfield, this talented forward, with an exciting future ahead of him, is likely to be instrumental.

Part 1: How Spurs can return to winning ways
Part 2: Lingard's energy can make up for missing Pogba