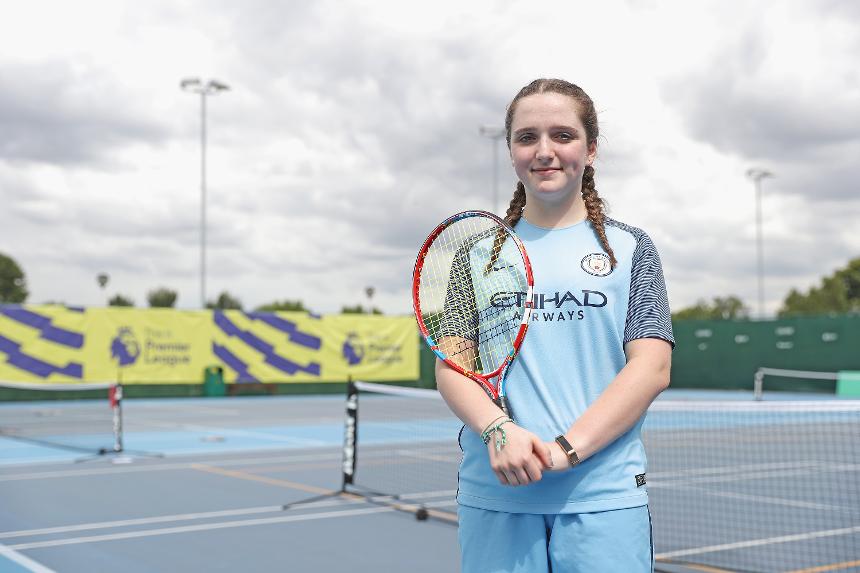 Having not played tennis in a long while, Bella was apprehensive when she started taking part in Premier League Tennis sessions with Manchester City's foundation, City in the Community.

"Some of our friends started to go to tennis after school and it was something to do, like a distraction," she says.

"I had not played tennis in so long and I was thinking, how good would the other people be in comparison to me?"

That was two years ago and Bella, now 14, has not looked back since.

Bella from @citctweets is transferring her court skills to the classroom pic.twitter.com/EGUf5QKNgS

"We started to get more into it, as we learnt new things and realised you can get better at it, even if you start off bad. Now I really enjoy it.

"It has made me realise that if I can do a sport, maybe I can try others. We have got into a badminton tournament. It is worth putting that effort in during school to come and do this.

"It has got me playing tennis outside of school, I now play tennis on the weekends and maybe with other friends and getting back into the sport, rather than being sat at home watching the TV."

Bella is one of 7,000 young people who have taken part in the PL Tennis programme since it began, in partnership with the Tennis Foundation, in 2013.

The scheme is part of a wider multi-sport offering that involves 22 professional football clubs using the appeal of their badge to engage young people from their local communities to take part in different sports, such as golf, athletics and boxing.

And for the last five years, participants from the PL Tennis programme have been given the opportunity to display their skills at the Premier League Tennis National Tournament at the LTA's National Tennis Centre in Roehampton.

And Bella was part of the team representing Man City who claimed victory in the event for the first time last month.

"It was a bit scary at the start but once you get into it you realise everyone is really friendly," she says. "It feels great hitting a good shot and winning a match.

"To win a game here is a really good feeling. It is proof to yourself that you are good enough and it is well worth going."

And as well as having an impact on Bella's tennis, the programme is also affecting her work in the classroom.

"I have learnt that if you make a mistake or do something like a bad shot, or you might not be having the best day, you can always get better and you can learn from what you do.

"You make more friends and you feel more comfortable in classes and it is something to think about and look forward to."