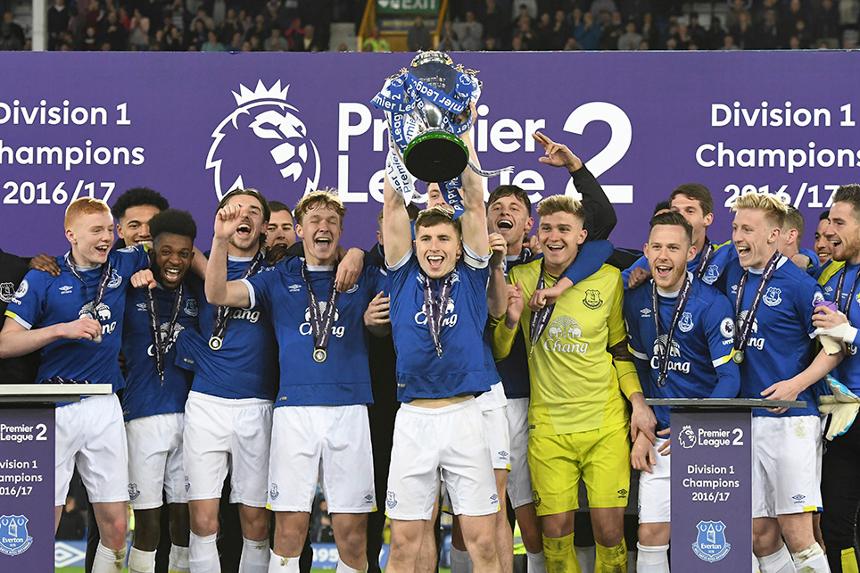 With PL2 fixtures released, Everton coach challenges his defending champions to get even better after dream year

Premier League 2 fixtures for 2017/18 announced
Unsworth: We can win trophies and develop

With first-team breakthroughs, the Premier League 2 title and FIFA World Cup glory for the core of their squad, the 2016/17 season could not have been much better for David Unsworth’s Everton Under-23 team.

But after the announcement of the PL2 fixtures on Thursday, Unsworth is focused on challenging his squad to improve even further as they aim to break into Ronald Koeman's senior team.

"It’s a great time to be an Evertonian," Unsworth said. "We’re signing top players and the club is going from strength to strength.

“It’s raised the bar, and that’s great because it’s a challenge for the young players to be even better than they already are."

Also, his team lifted the PL2 Division 1 trophy in front of 18,000 fans at Goodison Park before captain Jonjoe Kenny and four of his team-mates helped England win the FIFA Under-20 World Cup.

Unsworth joked: “They were showing off [their World Cup winners’ medals] and we stopped that straight away!

“The five lads are great lads and we’re very proud of them, the whole club was, the whole country was. I spoke to them the day after they won the World Cup final and they were all buzzing.

“They’re very humble lads and they’re all desperate to be top footballers. They’ve certainly given themselves a great opportunity at the tender years they are.”

Speaking about what has made the Everton Academy so successful in recent years, Unsworth said: “There’s a clear pathway.

“We’ve got top coaches. We’ve got 11 or 12 former players, throughout the whole Academy, who know what it takes to become a professional footballer.

“When those values are instilled at a young age, every year, it’s very powerful. At the end of it there’s an opportunity as well.”

Unsworth says adding depth with signings like Dominic Calvert-Lewin and Ademola Lookman has aided wider development, but the club also gives players as much time to harness their potential as possible.

He said: “We've looked at all our age groups, our depth charts, and if ever we’ve felt there’s been a hole in one of those charts and we need a player, then we’ve scouted the world.

“If the first team are buying quality players, then the standard underneath that has got to go up as well, underneath me, the Under-18s and all the way through the Academy. We all have to raise our game and produce even better players then we have historically.

“There’s a lot of talent. It’s changed a bit because first teams will take bigger numbers, so we have to be patient with our players. What we did five years ago, releasing a player at 18 or 19, we might keep them in the system longer.

“The average age for a Premier League debut now is 22 or 23. So we treat every individual who’s got the potential as a separate case.

“There’s different routes for every individual. Tom Davies didn’t go on loan. Matty Pennington started at Tranmere, went to League One, the Championship and then got in. We brought Mason in from the Championship.

“What we’ve got to do is to keep these players in our system as long as we can, so we don’t lose out on the opportunity of them playing in our first team one day.”