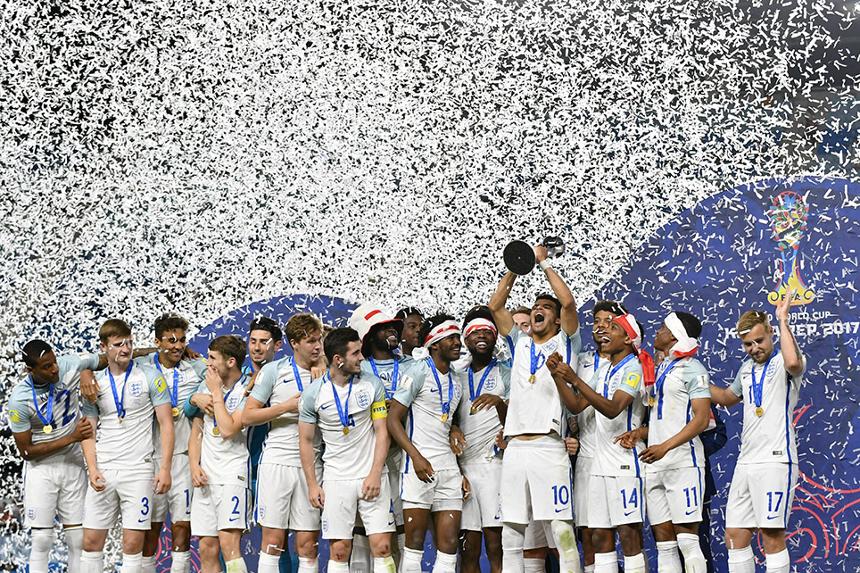 From Premier League 2 to the Under-20 World Cup final, we look at England's starlets who made history in South Korea

Prior to England's FIFA Under-20 World Cup final victory over Venezuela on Sunday, we took a look at the players who have come up mainly through Premier League academies to help the Three Lions reach their first World Cup final since 1966.

Freddie Woodman (Newcastle United)
Age 20; Academy appearances* 64
Started at Crystal Palace, before moving to Newcastle and has made 11 PL2 appearances. Was on loan at Kilmarnock in the Scottish Premiership last season.

Dean Henderson (Manchester United)
Age 20; Apps 42
Moved to Man Utd aged 14 and has made three PL2 appearances. He was on loan at League Two club Grimsby Town in 2016/17 before being recalled in February.

Luke Southwood (Reading)
Age 19; Apps 61
Has yet to play for the first team, but has featured 11 times in PL2.

Dael Fry (Middlesbrough)
Age 19; Apps 69; Goals 6
Scouted by Boro when he was seven years old, Fry spent a period of last season on loan at Rotherham United and also made six PL2 appearances.

Fikayo Tomori (Chelsea)
Age 19; Apps 68; Goals 3
Progressed through the Chelsea academy, winning back-to-back FA Youth Cups. After being handed a senior debut at the end of 2015/16 he helped Brighton gain promotion to the PL during a loan spell in 2017.

Jake Clarke-Salter (Chelsea)
Age 19; Apps 55; Goals 3
Joined at eight years of age and made his PL debut against Aston Villa in 2016. Has made three PL2 appearances.

Kyle Walker-Peters (Tottenham Hotspur)
Age 20; Apps 87; Goals 4
Capable of playing on either side of the defence, the full-back made 15 PL2 appearances last season.

Callum Connolly (Everton)
Age 19; Apps 94; Goals 21.
Made his senior PL bow as a second-half substitute against Southampton in 2016 and has made 12 PL2 appearances. Scored twice on his Wigan Athletic debut after joining on loan in January 2017.

Ainsley Maitland-Niles (Arsenal)
Age 19; Apps 74; Goals 8
Able to play in either defence or midfield, Maitland-Niles made his Arsenal debut aged 17 in the UEFA Champions League and has made two senior PL appearances.

Ovie Ejaria (Liverpool)
Age 19; Apps 63; Goals 8
After nine years at Arsenal, Ejara moved to Anfield in 2014. His full debut came in the EFL Cup and he has since made two PL appearances.

Ademola Lookman (Everton)
Age 19; Apps 47; Goals 34
Joining from Charlton Athletic in January 2017, Lookman scored on his PL debut against Manchester City and has played eight times in the top flight.

Dominic Solanke (Chelsea)
Age 19; Apps 55; Goals 34
Tournament's top scorer with four goals. The Chelsea academy graduate spent 2015/16 on loan at Vitesse Arnhem. He will be moving to Liverpool on 1 July.

Dominic Calvert-Lewin (Everton)
Age 20; Apps 71; Goals 26
Beginning his career at Sheffield United, he moved to Goodison Park in August 2016 and has scored once in 11 senior PL appearances in 2016/17.