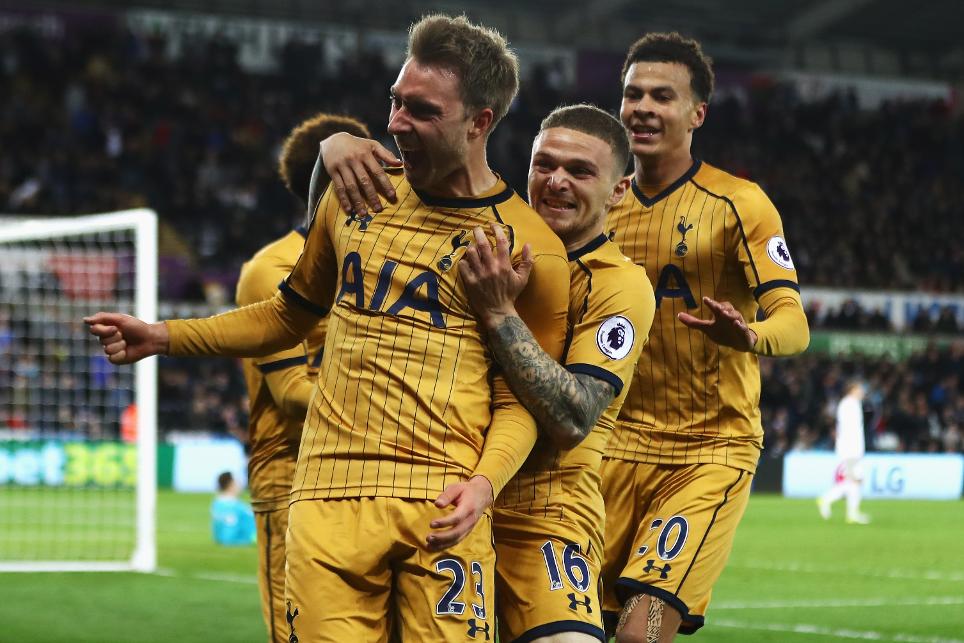 With 69 points gathered from our midweek squad, the pressure is on the Gameweek 32 selection to maintain momentum.

The Tottenham Hotspur midfield delivered in a big way at Swansea City on Wednesday, and we are backing a similar outcome in Saturday's early kick-off with Watford.

The Argentinian has kept three clean sheets in six and is the most secure selection from a shuffling City defence. City host Hull City, who have scored just seven goals on their travels, the fewest by a Premier League side.

The key figure in a stubborn Boro rearguard, Gibson will look to marshal his defence to a 10th shutout of the season against Burnley at the Riverside Stadium. Like Hull City, Burnley have struggled for goals on their travels, with nine from 15 matches.

A regular in our selection since he became established in the starting line-up in Danny Rose's (£5.9m) absence, Davies looks poised for further returns in Saturday's early kick-off. Spurs boast the strongest home defence, conceding eight goals from 15 matches, while Watford arrive having scored 12 times in 15 away trips.

Rested for the midweek stalemate with Everton, the Ecuadorian looks poised to return for a visit to Sunderland. The struggling Sunderland are in dire need of a result but have failed to score in the last six Gameweeks. That promises defensive returns for Valencia, who has also produced three assists and a goal in his last eight starts.

With 12 goals in his last 14 Gameweek starts, the Spurs midfielder was always a shoo-in for the XI ahead of a White Hart Lane encounter with Watford. With the visitors also suffering from key absentees at the back, Alli's prospects look even stronger: he has scored in three successive home matches and claims our Gameweek captaincy.

While Alli's selection was assured, it was also impossible to ignore Eriksen's claims. The Dane has produced five goals and nine assists over his previous eight home matches and only Manchester United's Zlatan Ibrahimovic (£11.4m) has fired more shots than Eriksen’s 111 this season.

The major bright spark during West Ham's recent decline, their manager Slaven Bilic will turn to Lanzini's guile to open up Swansea City at the London Stadium. With three goals and an assist in his last seven Gameweeks, the playmaker has form but is still only found in 3.2% of FPL squads.

With Alexis Sanchez (£11.7m) deployed in a more traditional wing role on the left, Walcott has come to the fore and outperformed the Chilean both for shots (six v two) and touches in the box (15 v 14) over the last three matches. He has scored in successive Gameweeks and has six goals in as many starts across all competitions ahead of a match with Crystal Palace.

Benched for the midweek defeat to Chelsea, the winger will be expected to earn an immediate recall to Pep Guardiola’s starting line-up for the visit of Hull City. The Tigers have conceded 35 goals on the road, more than any other Premier League side, presenting Sterling with the opportunity to add to his tally of six goals and 12 assists.

Hull City's defensive record can only promote Aguero's weekend prospects. With four goals in his last five starts and nine in nine in all competitions, he is in prolific form, although a record of just four strikes in 11 home appearances swayed us to look elsewhere for our captain.

A devastating performer at Goodison Park - with 10 goals from his last six on home turf - we had to keep faith with Lukaku for a meeting with Leicester City, despite the striker suffering back-to-back blanks. The Belgian scored in the reverse fixture in Gameweek 18 and with the Foxes missing captain Wes Morgan (£4.7m), they could struggle to contain Lukaku’s pace and power.