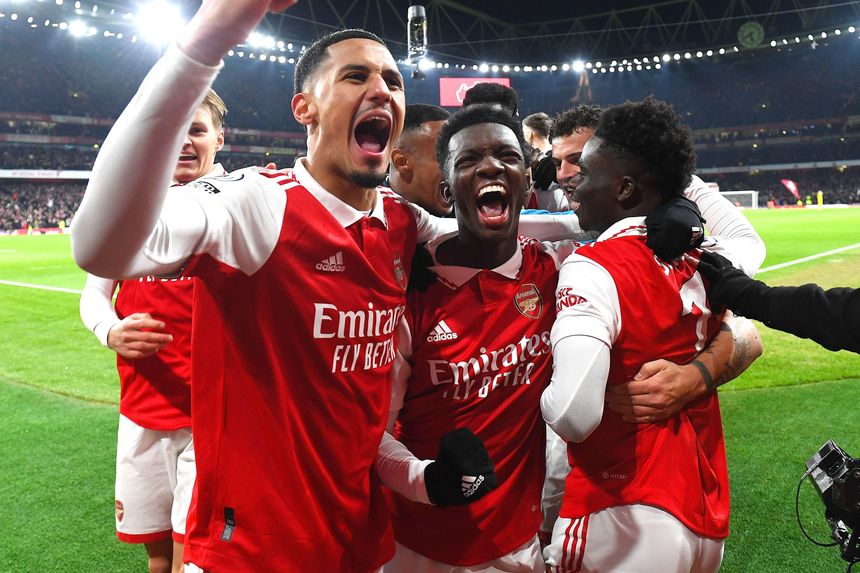 From Nketiah's brace to goal-shy Newcastle and hope for Everton, here is what the nine matches taught us

Scholes: Zinchenko is having a massive influence at Arsenal

The 2022/23 season went past the halfway point over the weekend, with Liverpool v Chelsea the 190th match of the campaign. We look at the key lessons learned from the most recent fixtures.

A dramatic 3-2 win over Manchester United on Sunday gave Arsenal their best-ever start to a Premier League season, with 50 points from 19 matches.

Such a feat looked in doubt in December when Gabriel Jesus was ruled out with a knee injury but the form of Eddie Nketiah has meant the Brazilian forward has not been missed.

Nketiah has 18 goals in his last 26 starts for Arsenal in all competitions, including his brace on Sunday.

With Jesus not back for another two months, it seems, the league leaders will hope their replacement forward can maintain his hot streak.

There seems little comfort for Everton at the moment after their 2-0 defeat by West Ham United extended their poor form and raised the pressure on manager Frank Lampard.

They have claimed only two points from eight league matches, five of which have been against teams who were 17th or lower when those fixtures started.

Their run is about to get tougher, with leaders Arsenal next to visit Goodison Park, followed by a Merseyside derby against Liverpool at Anfield.

But, Everton fans might see hope in the fact that the last time the Gunners came to them, in December 2021, the Toffees were on an identical poor run of two points from a possible 24.

But Everton held their own and a stunning late strike from Demarai Gray earned them a 2-1 success.

Of course, Arsenal are made of different stuff this season. Also Everton fans will also remember that the victory in December was not a turning point and was followed by another poor run, the team failing to win any of their next 11 league matches.

Erling Haaland was at his devastating best on Sunday, scoring a hat-trick to help Manchester City ease past Wolverhampton Wanderers.

The Norwegian had ended a run of more than six halves of matches without a goal in all competitions with his midweek equaliser against Tottenham Hotspur. He followed it up against Wolves with a 14-minute treble, his fourth hat-trick of the season.

Amazingly, this came in only in his 19th league appearance, fully 46 matches quicker than the fastest player to do so previously, Ruud van Nistelrooy.

Another match, another record for @ErlingHaaland 🔥

The fastest to score four hat-tricks in #PL history ⚡ pic.twitter.com/MXAjcRqi4P

Haaland is on target to equal the most hat-tricks scored in a single season, Alan Shearer's five in 1995/96 for Blackburn Rovers.

We know that Newcastle United have few problems at the back. They have yet to concede since the season resumed and recorded a league-high 12th clean sheet against Crystal Palace on Saturday.

But if they want to maintain an unlikely title charge, they must start scoring goals.

Since the return of the Premier League, Eddie Howe's side have found the back of the net only four times in five matches, with three of those coming at Leicester City on Boxing Day.

Howe will be hoping Callum Wilson can find his shooting boots once more, as the forward is without a goal since a double in a 4-0 win over Aston Villa on 29 October.

Shearer praised his former side for keeping yet another clean sheet at the weekend but also identified the need for more creativity.