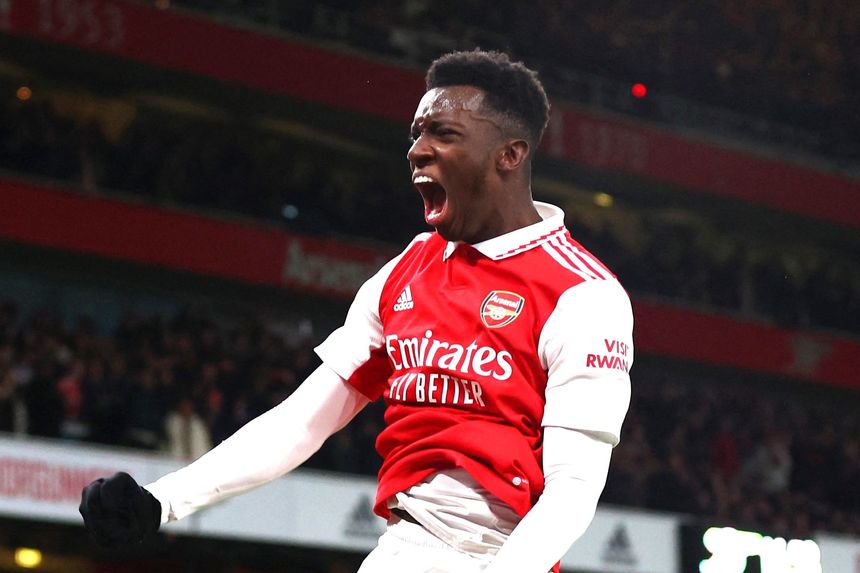 Scholes: Zinchenko is having a massive influence at Arsenal

Arsenal claimed a huge win in the race for the Premier League title, beating Manchester United 3-2 late on in a pulsating encounter at Emirates Stadium.

Eddie Nketiah scored twice for the leaders, including the 90th-minute winner, where he produced a brilliant piece of improvisation to divert in Martin Odegaard's shot from close range.

Arsenal went in front early in the second half when Bukayo Saka hit a superb shot for his eighth Premier League goal of the season. He's the first player since Thierry Henry in 2001, and only the third in Arsenal's history, to score in three consecutive fixtures against Man Utd.

Lisandro Martinez's looping header levelled the match again before Nketiah pounced late on as Arsenal laid down another marker in their bid for a first title since 2004.

They are on 50 points after 19 matches, maintaining their five-point gap over Manchester City, who have played a fixture more. Man Utd are fourth on 39 points.

Haaland with another hat-trick

Erling Haaland was the difference for Man City again as his hat-trick secured a 3-0 win over Wolverhampton Wanderers.

His treble came in 14 minutes and was Haaland's fourth hat-trick of the season, moving him further clear in the race for the Castrol Golden Boot. He is on 25 Premier League goals, two more than last season's winners.

Victory for City consolidated their place in second, while Wolves drop to 17th and are only above the bottom three on goal difference.

There was nothing to separate Leeds United and Brentford in a 0-0 draw at Elland Road.

Chances were at a premium but it was the hosts who came closest to breaking the deadlock.

Rodrigo forced David Raya into a good save from his long-range effort, and the Brentford goalkeeper stood tall again to deny Wilfried Gnonto.

Leeds drop to 15th on 18 points, only one above the relegation zone. Brentford are unbeaten in eight matches and remain eighth on 30 points.

Matchweek 21 concludes on Monday as Fulham host Tottenham Hotspur, knowing a fifth win in six matches would move them above Spurs into fifth

Harry Kane is a goal away from matching Jimmy Greaves' all-time Spurs record of 266 and only two Premier League goals from joining Alan Shearer and Wayne Rooney in the "200 Club" as his side look to bounce back from successive defeats.