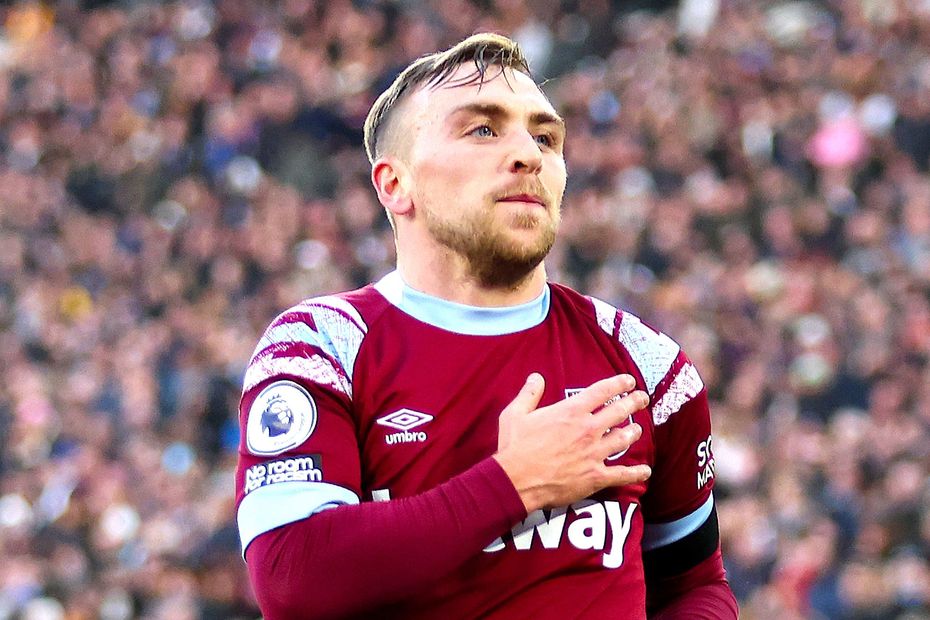 Bowen: I could not have asked for a better weekend! External Link
Sherwood: That's why Pope is in my Fantasy team

West Ham United moved out of the relegation zone with a huge 2-0 win against Everton, who suffered their sixth defeat in seven Premier League matches.

On an afternoon when West Ham paid tribute to joint-chairman David Gold, a first-half brace by Jarrod Bowen - his first Premier League goals since October - put the Hammers in control.

Nayef Aguerd and Declan Rice went close to adding to Everton's woes as West Ham eased to a comfortable victory.

A first win in eight matches takes West Ham up to 15th spot with 18 points, one clear of the bottom three. Everton are 19th on 15 points.

Newcastle United extended their unbeaten Premier League run to a club-record 15 matches as they moved up to third with a 0-0 draw at Crystal Palace.

Newcastle, who last tasted top-flight defeat at Liverpool in August, were matched by a battling Palace throughout.

Callum Wilson spurned a great chance to break the deadlock on 53 minutes, but the Newcastle striker headed Kieran Trippier's delivery straight into the hands of goalkeeper Vicente Guaita.

Nick Pope then showed rapier-like reactions to push away Jean-Philippe Mateta's ferocious goalbound strike as Palace came close to claiming a 73rd-minute winner. It was Pope's sixth consecutive clean sheet and his 12th of the season, putting him three clear of Aaron Ramsdale in the race for the Castrol Golden Glove.

The point takes Newcastle to within eight points of leaders Arsenal, but having played two matches more.

All square at Anfield

Earlier in the day, Jurgen Klopp's  1,000th professional match as a manager ended in frustration as Liverpool were held to a goalless draw by Chelsea at Anfield.

The Blues thought that they had taken the lead when Kai Havertz scored after only four minutes, but his effort was ruled out for offside following a VAR review.

Mykhailo Mudryk, Chelsea’s record signing, impressed after coming on during the second half but Graham Potter’s side had to settle for a point that keeps them in 10th place, level on 29 points with eighth-placed Liverpool.

There was late drama at King Power Stadium, where teenage substitute Evan Ferguson salvaged a point for Brighton & Hove Albion in an entertaining 2-2 draw at Leicester City.

Brighton's hopes of moving up to fifth spot were boosted on 27 minutes when Kaoru Mitoma's sublime curling shot put them 1-0 up, his fourth goal in six matches.

Marc Albrighton had been on the field for just three minutes in place of the injured Dennis Praet when he tucked home Leicester's equaliser before the break.

The Foxes edged 2-1 ahead through Harvey Barnes, but they were denied a first win in five matches when Ferguson met Pervis Estupinan's cross with two minutes remaining. It was the 18-year-old's third goal in his last four Premier League appearances.

Brighton climb to sixth on 31 points, while Leicester move up to 14th with 18.

Ollie Watkins netted a late winner to earn Aston Villa a 1-0 success at bottom club Southampton as the renaissance under Unai Emery continued with a fifth victory in seven matches.

Southampton had a goal overturned in either half, the second following a VAR review, in a match that was suspended for 10 minutes when referee Michael Salisbury was alerted to a drone hovering over St Mary's Stadium during the first half.

Villa sit 11th with 28 points, while Southampton stay on 15 points.

Further along the south coast AFC Bournemouth picked up their first point in five matches with a 1-1 draw at home to Nottingham Forest.

The Cherries gave a debut to new signing Dango Ouattara, and it was from his 28th-minute cross that Jaidon Anthony finished past Forest goalkeeper Wayne Hennessey.

But Forest substitute Sam Surridge returned to deny his former club three precious points in their relegation battle as he popped up to convert Brennan Johnson's low cross seven minutes from time.

The point takes 13th-placed Forest four points clear of AFC Bournemouth, who were up to 14th place at half-time, only to end up third from bottom.

Three more fixtures await on Sunday including a huge encounter at the top of the table.

Arsenal welcome Manchester United to Emirates Stadium, with both sides looking to lay down a marker in their title aspirations.

Victory for Man Utd would put them within five points of the Gunners, but if the hosts win, they would go 11 clear of the Red Devils.

Elsewhere, second-placed Manchester City will look to stay in touch with the league leaders when they host Wolverhampton Wanderers, while Leeds United are aiming to record a first win in six matches when they take on Brentford at Elland Road.