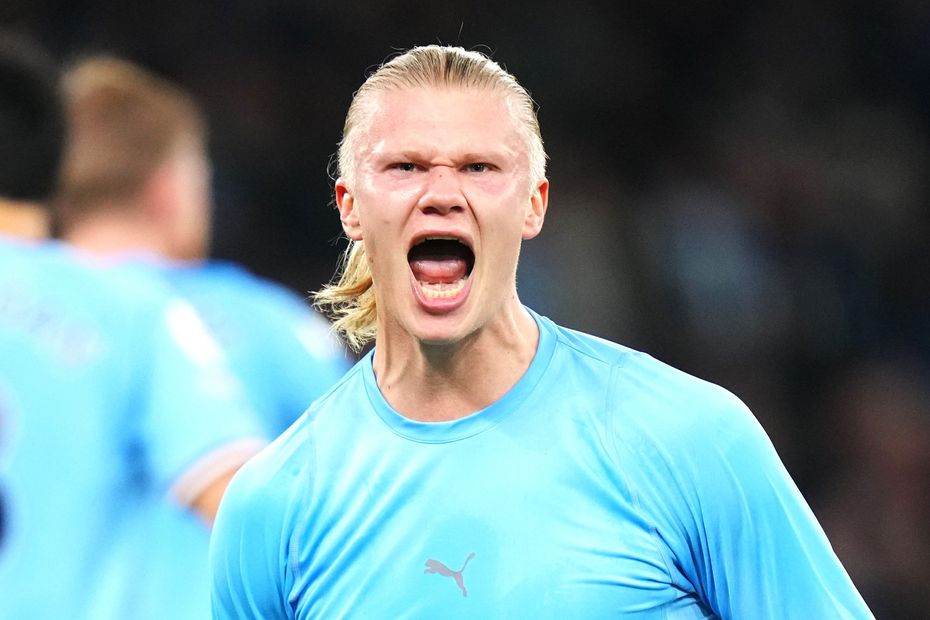 Manchester City edged a dramatic 2-1 victory over Fulham thanks to a stoppage-time penalty from substitute Erling Haaland.

The Man City striker thought he had scored shortly after coming on in the second half, only for his effort to be disallowed for offside after a VAR review.

But, after Kevin De Bruyne had been fouled by Antonee Robinson in added time, Haaland kept his nerve to beat Bernd Leno from the spot.

City had led through Julian Alvarez, but were pegged back by Andreas Pereira's spot-kick, awarded for a foul on Harry Wilson, which resulted in the 26th-minute dismissal of Joao Cancelo.

The champions' late victory takes them top with 32 points, one ahead of Arsenal, while Fulham drop to eighth on 19.

In addition to the three goals at the Etihad, there were a further 16 strikes in the other 15:00 kick-offs in a brilliant day of Premier League action.

Seven came at Elland Road as Leeds United showed immense character to come from 3-1 down to beat AFC Bournemouth.

Leeds went ahead after three minutes through Rodrigo's penalty, but that lead lasted only four minutes as Marcus Tavernier levelled.

Goals from Philip Billing and Dominic Solanke put AFC Bournemouth 3-1 up, but second-half substitute Sam Greenwood reduced the deficit with a superb strike, before providing an assist for Liam Cooper's header.

Fresh from scoring the winner against Liverpool, Crysencio Summerville was the hero again, netting in the 84th minute to complete a brilliant turnaround by Jesse Marsch's side.

Brighton & Hove Albion made it successive wins for the first time under Roberto De Zerbi as they claimed a 3-2 victory at Wolverhampton Wanderers.

Adam Lallana's opener was cancelled out just two minutes later by Goncalo Guedes before Ruben Neves put Wolves in front with a penalty.

Kaoru Mitoma equalised with a fine header on 44 minutes and, after Nelson Semedo had been sent off for bringing down the Japanese international in first-half stoppage time, Pascal Gross scored the winner seven minutes from time.

Brighton climb to sixth on 21 points, while Wolves, who appointed Julen Lopetegui earlier in the day, stay 19th on 10.

The goals kept on coming as Nottingham Forest and Brentford played out a thrilling 2-2 draw.

Morgan Gibbs-White opened the scoring for Forest, but goals from Bryan Mbeumo, from the penalty spot, and Yoane Wissa put Brentford ahead.

But, in the sixth minute of stoppage time, Zanka diverted the ball into his own net to earn Forest a point keeps them bottom.

Brentford move up to 10th with 16 points.

In Saturday's final match, late goals in each half from Youri Tielemans, with a spectacular volley, and Harvey Barnes earned Leicester City a 2-0 win over Everton at Goodison Park.

The Foxes leapfrog two places above Frank Lampard's side on goal difference into 13th.

More excitement beckons on Sunday with five matches, including a London derby between Chelsea and Arsenal and Tottenham Hotspur facing Liverpool.

In between, Unai Emery will make his managerial bow for Aston Villa against Manchester United, Southampton take on top-four-chasing Newcastle United and there is another derby between West Ham United and Crystal Palace.