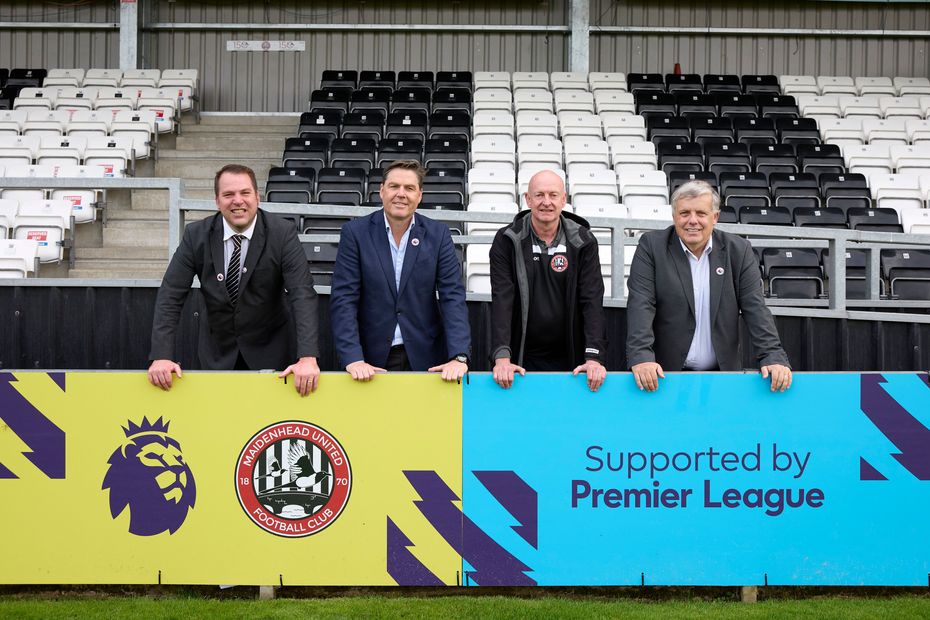 A package of £12.6m will help clubs in the National League as well as their communities

The Premier League has announced an increased investment package of £12.6million to support the National League over the next three years.

A sum of £9m is available to support the 72 National League Clubs with running costs and sustainability.

A further £3.6m will be available via the Premier League and Professional Footballers' Association's partnership to support the National League Trust and the network of club community organisations like the Maidenhead United FC Community Trust.

Players from the club's 51 junior teams, launched in 2019 with support from the National League Trust, also assembled at the ground for photographs with the Trophy.

The new Premier League investment is in addition to the Premier League Stadium Fund, which has made £33m available over the next three years to help clubs across the football pyramid to transform matchday experiences and improve sustainability.

Funding for maintenance and new infrastructure is available to clubs playing in Steps 1 to 6 of the National League, including those promoted into the English Football League, as well as for the women's football pyramid.

Maidenhead United have received more than £300,000 in funding for stadium improvements from the Premier League since 2003, with grants contributing to the construction of covered seating areas, a new accessibility entrance and updated turnstiles and floodlights.

The club's historic York Road Stadium has been home to The Magpies since 1871, the oldest ground used continuously by the same club.

"The continued success of Premier League football over the past 30 years enables us to provide unprecedented investment in communities and wider football," said Masters.

"As we look to the future, we are committed to investing more than ever, to help develop the game and provide opportunities to people of all ages.

Mark Ives, General Manager of the National League, added: "We welcome the ongoing support of the Premier League and this new investment will provide a timely boost of vital funding to our clubs. This is brilliant news for our competition and its future.

"Fans and communities are at the heart of everything we do. The Premier League's increased funding package for the National League Trust means even more resource for our club foundations to continue and expand their roles in local communities."

Last season, the Premier League supported National League clubs with £5m to help them with their continued recovery from the COVID-19 pandemic.

During the Premier League Trophy’s visit to York Road, lifelong fan of the club Nick Bradshaw was named as Maidenhead United’s Community Captain in recognition of his work as a volunteer combating loneliness and providing support to vulnerable residents in the local community.

The club have commended Nick in particular recognition of his support of the late Levi Niemann, a remarkable resident of Maidenhead, who first became known to the club through the Magpies Community Care Helpline, which operated during the pandemic.

Nick formed a friendship with Levi, who was registered as blind in 2012, helping him to live more independently and even to achieve a lifetime ambition to skydive to raise funds for Guide Dogs UK.

"A captain is someone who shows leadership and commitment and uses their ability to help others, which means Nick is a more than deserving recipient of this prestigious Premier League award," said Massey.

"Nick is an incredible example of the relationship the club is proud to have within the community and it is testament to the hard work of everyone at the Community Trust."

The Community Captain accolade is being given to more than 100 members of the public who have made an outstanding contribution to their club and local community, as part of the Premier League’s 30th anniversary celebrations.

"The club has been the beneficiary of funding from the Premier League through the National League over several years.

Over the next three years, the League will continue its world-leading levels of support by contributing £1.6 billion to communities and the wider game. During the Trophy Tour, the League will be announcing new financial commitments to benefit fans and communities.