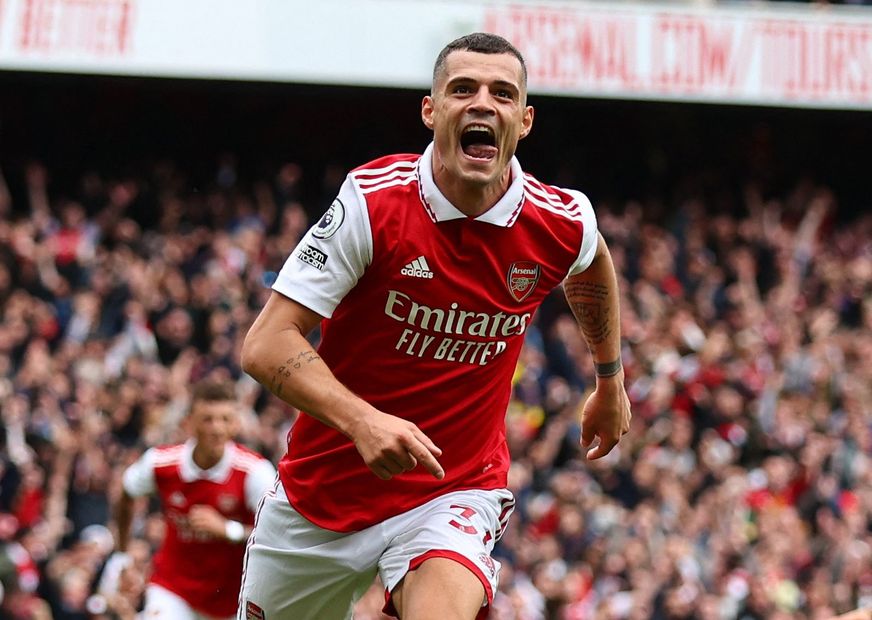 Arsenal produced an impressive 3-1 win at home to Tottenham Hotspur to extend their lead at the top of the Premier League table.

A stunning long-range effort from Thomas Partey gave the hosts a deserved lead.

Harry Kane levelled from the penalty spot with a record 44th London derby goal and a 100th strike away from home in the Premier League - also a Premier League first.

However, goals from Gabriel Jesus and Granit Xhaka, either side of a red card for Emerson Royal, earned Arsenal the victory to stretch their lead to four points.

Leandro Trossard was Brighton's hero with a hat-trick in a thriller at Anfield in which Liverpool had fought back from being two down to edge ahead.

The Belgian joined an exclusive list of visiting players to have taken the match ball from Anfield, along with Andrey Arshavin and Peter Ndlovu, as Brighton stayed fourth with 14 points, four ahead of ninth-placed Liverpool.

Another head coach making his Premier League bow with his new club was Graham Potter, who also enjoyed a promising start.

Chelsea fell behind but goals from Pierre-Emerick Aubameyang, his first for the club, and former Crystal Palace loanee Conor Gallagher gave the Blues a 2-1 win at Selhurst Park to lift them a point behind Brighton. Palace slip to 17th, on six points.

Newcastle United's wait for a second victory of the season came to an end in emphatic fashion at Fulham as a brace from Miguel Almiron helped the Magpies to a 4-1 win.

The match turned on an early red card for Nathaniel Chalobah. Callum Wilson and Sean Longstaff were also on target as Newcastle climbed to seventh, above Fulham on goal difference.

Everton are a point back in 11th after two goals in three second-half minutes earned them a 2-1 comeback victory over Southampton.

Gary O'Neil extended his unbeaten run as AFC Bournemouth interim head coach to four matches in a goalless draw at home to Brentford.

Scamacca off the mark

In Saturday's late match, West Ham United climbed to 15th thanks to a 2-0 win over Wolverhampton Wanderers.

Gianluca Scamacca claimed his first league goal with a superb volley, while Jarrod Bowen was also on target for the first time this season.

On Sunday, Erik ten Hag and Pep Guardiola will lock horns in the Manchester derby.

In-form Manchester United can move two points behind their neighbours with a fifth straight victory.

Manchester City will be looking to extend their winning run in derbies to three and close the gap on Arsenal to one point.

Then Leeds United host Aston Villa as Steven Gerrard's team seek their first away win of the season.