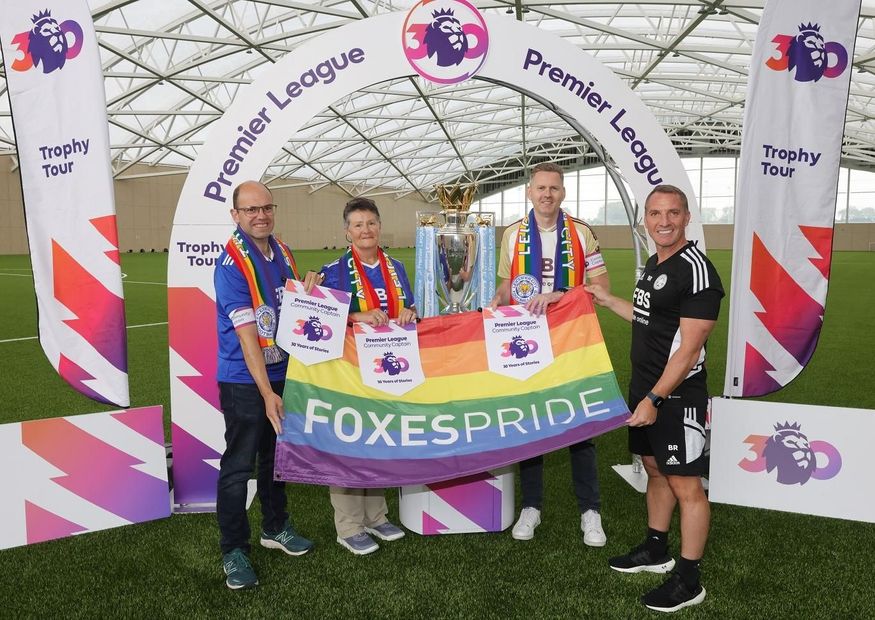 LGBTQ+ fan group Foxes Pride has been awarded with the Premier League Community Captain accolade by Leicester City in recognition of their campaign work with the club, helping to combat homophobia in football and creating a safer and more inclusive environment for all fans.

The presentation is the latest on the Premier League 30 Year Trophy Tour, where Community Captain accolades are being awarded to members of the public, who have made an outstanding contribution to their club and local community.

A plaque engraved with the group’s name, was also added to the Premier League Trophy plinth as part of the seven-week tour of England and Wales.

The voluntary supporter group was established in 2015 and since then, Foxes Pride have established a great partnership with Leicester City and grown to include more than 200 LGBTQ+ members and allies.

Rodgers said: "This Community Captain award is a testament to the great work Foxes Pride do to promote inclusion and equality.

"On behalf of Leicester City, I wish them all the very best as they continue with their great work to make the game more inclusive.”

Foxes Pride has met with the club on a number of occasions and last year spoke with Brendan Rodgers and a group of senior players, including Marc Albrighton, James Maddison, Youri Tielemans, Evans and Jamie Vardy to share some of their experiences and discuss taking positive action to support LGBTQ+ fans.

Vardy gifted Foxes Pride the rainbow corner flag he kicked in celebration, after scoring a last-minute winner against Sheffield United in December 2020 to show his support for the group.

Smith explained: “In his customary way, Jamie Vardy celebrated a goal by kicking the corner flag, which happened to have a rainbow flag on it. That image was misused on social media and online in a homophobic way.

"We worked with the club to send a positive message from this, the club retrieved that corner flag and Jamie Vardy signed it with a message of his support. This will be framed and put on permanent display in the club shop.

“The first time I saw the Leicester City team posing with the rainbow flag meant a huge amount to me as a gay man. It showed me that players were prepared to stand up against homophobia, LGBTQ-phobia and transphobia.

"We still get reports that people are happy to use homophobic words in stadiums and we want to work towards a situation where football does feel safe for all.

“Meeting Brendan and meeting Jonny has been a fantastic experience and it's great that we have these opportunities to share the importance of being an ally and an advocate for the LGBTQ community.”

Evans said: "Football is for all, it is for everyone, and we as players want to get that message across by showing our support and denouncing any language that may be used in a stadium which is totally unacceptable - until we get to the stage where we aren’t hearing it at all.”

The Premier League is committed to making football an inclusive environment for all and is proud to continue working with clubs and Stonewall on the Rainbow Laces campaign, to help promote diversity and encourage allyship.

This includes the creation of educational resources, available for free through Premier League Primary Stars, which encourage conversation around gender stereotypes.

During the Trophy Tour, the League will be announcing new financial commitments to benefit fans and communities.

This includes increased investment into the Premier League Fans’ Fund, with £5m available to support fan engagement projects across the top four divisions of the football pyramid.

The tour will also give an opportunity to highlight new Premier League investment into women’s and girls’ football, including the Emerging Talent Centres announced earlier this summer.

£1.6bn to communities and wider game

Premier League Chief Executive Richard Masters said: “As we mark 30 years since the Premier League first kicked off, it is important we celebrate the unsung heroes who deliver brilliant work in their communities. These people – whether they are participants, coaches, volunteers or long-time employees – are the lifeblood of their clubs and their communities.

“The continued success of Premier League football enables us to provide unprecedented investment in communities and wider football. As we look to the future, we are committed to investing more than ever, to help develop the game and provide opportunities to people of all ages.”