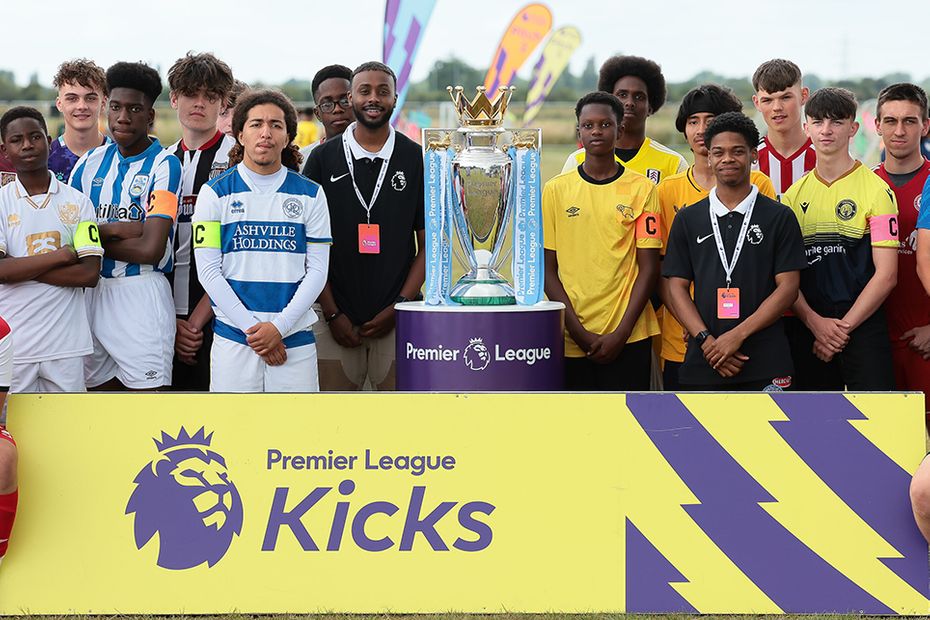 Almost 1,000 young people from across England and Wales are coming together in Nottingham this week to take part in three days of competition at the Premier League Kicks Cup.

The event at Nottingham University's Riverside Sports Complex, being held for the first time since 2019, celebrates the year-round work of Premier League Kicks in local communities.

Over 100 Under-16 boys', girls' and pan-disability teams, representing more than 70 Premier League, EFL and National League clubs, are competing, with Manchester United winning the boys final on the opening day.

Thanks to everyone that came down on an electric first day of the #PLKicks Cup ⚡️@MU_Foundation took the trophy, but the day was about so much more than winning 🏆 pic.twitter.com/P6fdwrC7YM

"They've been coming to our sessions, some of them since they were primary school kids, said Andy Savery, Manchester United Foundation community project co-ordinator. "To see them grow up and turn into wonderful human beings has just been incredible."

"[PL Kicks] is an amazing opportunity to come down and play free football sessions on a weekly basis, the length and breadth of the country. So many clubs offer these opportunities and it's just incredible that they're there for our young people.

"Then you get opportunities like this to come and represent your club at big competitions. You can see how everyone was buzzing today, not just winners and runners-up, it was everyone who took part; playing in their club kits, it just raises their confidence in everything."

Players and coaches from all walks of life are involved in the #PLKicks Cup 🌟@Makaifray is just one of many that benefitted from the programme 👏 pic.twitter.com/7Y5igOp4Tn

The #PLKicks Cup is about being part of something bigger 🌍@PAFCCommunityTr are just one team
benefitting from playing against
participants from across the country in an all-girls tournament 🏅 pic.twitter.com/J46rsX8QGj

The event is breaking down barriers to create the most inclusive experience for everyone involved 👊 pic.twitter.com/bPQVeKaeiX

As with the main programme, the PL Kicks Cup is not just about the football. Workshops, music and activities such as Street Golf are laid on for the young people to engage with, while special guests Makai Fray and Sharky got involved in the action.

"The most important thing about PL Kicks is it keeps people off the streets; we're playing football, it brings us together as a community," said social media star Makai, who was a former PL Kicks participant with the West Ham United Foundation.

"Coming back and seeing everyone play, it's nice to reminisce. It's nice to see everyone having a good time, everyone in the community coming together to play some football."

Players from across the country are participating, and their coaches know how important the programme is for their communities 👇 pic.twitter.com/qvP0WllWon

Since it began, more than 440,000 young people have participated in PL Kicks football and multi-sport sessions run across 936 venues by 90 Premier League, English Football League and National League sides.

To date, the Premier League has invested almost £66 million in Premier League Kicks and an estimated 80,000 young people take part in the programme every year.

To keep track of all the PL Kicks Cup action, follow @PLCommunities and #PLKicks.

Great experience with the boys team yesterday, now our girls have their chance to impress in Nottingham today! 👊@PLCommunities 🐺⚽ pic.twitter.com/OqPIsFa028

#PLKicks | We had a great day in Nottingham yesterday for the #PLKicks Cup 2022.

Great experience to play against teams from all over the Premier League and Football League.

The lads only fell to one defeat in 6 games narrowly missing out on the knockout rounds.

Today sees some young women from our #PLKicks project representing @AVFCOfficial in the Premier League Kicks Cup in Nottingham.

A selection of our #PLKicks participants had an amazing day at the Kicks Cup yesterday! A fantastic event with 6️⃣6️⃣ different clubs taking part.

Thank you to @PLCommunities for organising it all for our young people and good luck to our girls team taking part today!#SCFC 🔴⚪️ pic.twitter.com/uo026fzXHm

🏌️‍♀️A chance to practice the Golf Swing in between games

A brilliant day in Nottingham at the @PLCommunities #PLKicks cup 2022. A great experience for our participants from The Trin session who represented @officialgtfc we also made some friends with @htafcfoundation great set of lads! pic.twitter.com/6ECWpq13lW