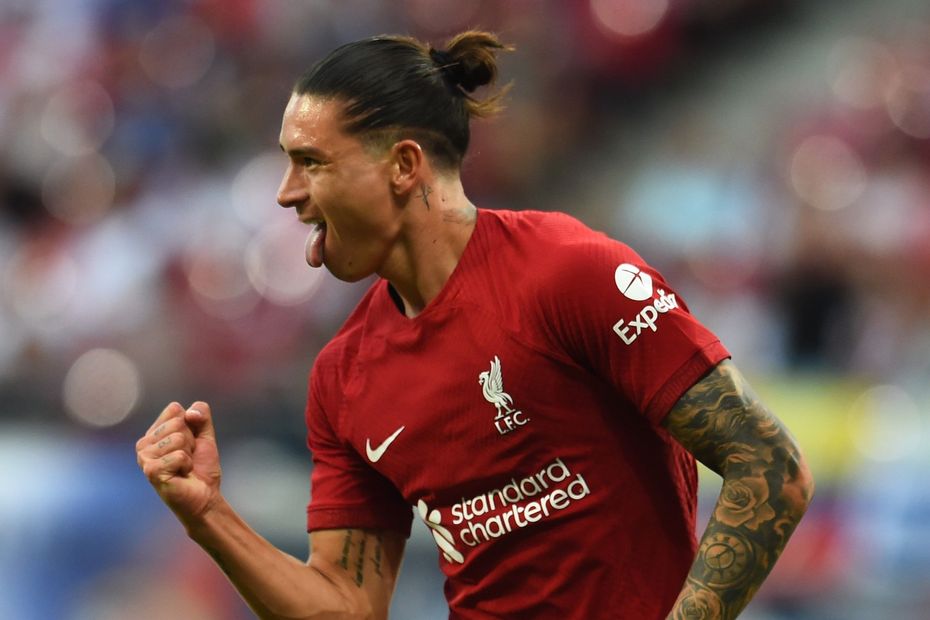 Liverpool have freshened up their forward line by signing one of Europe's most impressive young forwards.

Uruguay international Nunez scored 26 league goals for Benfica last season, at a rate of one every 76.5 minutes.

In the UEFA Champions League (UCL), the 23-year-old’s excellent form helped take Porto to the quarter-finals, where his old club were beaten by his new one.

Those strikes, which arrived every 102.2 minutes on average, came against strong sides: Barcelona (two goals), Bayern Munich, Ajax and Liverpool, who conceded against Nunez both home and away.

Liverpool's new signing has now made a big statement for his new club, coming off the bench at half-time against RB Leipzig on Thursday and scoring four goals.

Time to enjoy @Darwinn99's first-ever hat-trick for the Reds ⚽⚽⚽ pic.twitter.com/vztvgVwHzx

The 6ft 2in Nunez is a natural No 9 who scores goals in a variety of ways.

He attacks crosses exceptionally well in the air, scoring several headers from crosses delivered from the right flank last season.

Nunez is at his best when poaching goals at close range but is also capable of running on to through-balls or creating chances for himself with individual skill.

He is a threat from anywhere inside 25 yards.

And if Mohamed Salah is unavailable to take a penalty, Nunez would undoubtedly feel confident in stepping up, having scored six spot-kicks last term.

While Nunez is very much a central striker, he was also used on the left side of a three-man attack at Benfica.

If Jurgen Klopp uses him primarily down the middle, he will make a habit of sprinting down the left.

This will encourage the likes of Luis Diaz and Diogo Jota to spin inside and take up goalscoring positions inside the box.

Nunez is terrific at running with the ball, completing 13 dribbles in last season’s UEFA Champions League.

From one such run he scored a fabulous solo goal against Barcelona.

Eleven players matched or bettered Nunez’s six UEFA Champions League goals last season, but of those he ranked in the top five for the most efficient conversion rate.

Netting six goals from just 17 shots, he has built a reputation for staying calm in big moments, as Liverpool will already know.

Nunez showed tremendous composure to beat Alisson in a 1v1 with a low finish at Anfield, having already scored with a crisp effort in the quarter-final first leg.

Based on his performance levels last term, Nunez can fill the void left by Sadio Mane, who has joined Bayern Munich.

While his attributes are different and he cannot be considered a direct replacement, he will offer a fresh dimension to Liverpool’s attack.

His style is rounded, meaning he can act as a target man, make runs in behind or seamlessly interchange with the wide forwards, while he is also strong in the air.

Liverpool fans will hope Nunez can have a similar impact to the last Uruguayan striker the club signed, Luis Suarez.