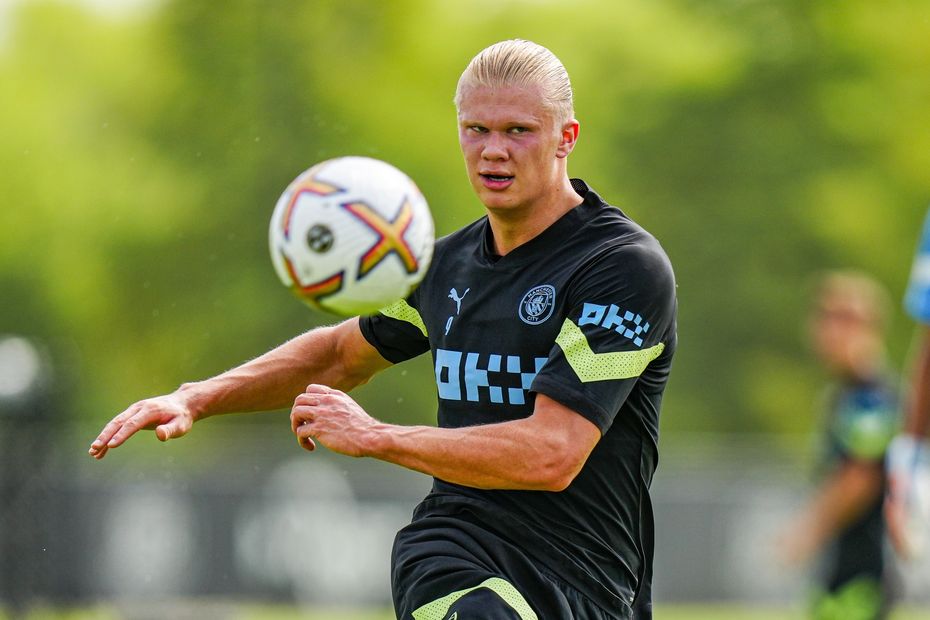 As Man City kick off their pre-season campaign, Adrian Clarke looks at their star striker

As Manchester City start their pre-season campaign against Club America at 01:30 BST on Thursday, Adrian Clarke assesses the impact their new striker will have in the Premier League.

Having played most of 2021/22 without a recognised centre-forward, Man City have filled the void by recruiting the best young striker in the world.

Scoring 61 goals in 65 Bundesliga matches for Borussia Dortmund, Haaland is simply a force of nature who will frighten Premier League defenders this season.

Still just 21, the Norwegian is tall, strong, quick and absolutely deadly in the box.

His arrival should help to take Man City to the next level in 2022/23. Everyone associated with the club will be eagerly looking forward to finding out his first opponents when the fixtures for the new season are released on 16 June.

How Haaland scored in the Bundesliga

Haaland has a devastating left foot that rarely lets him down. It is responsible for 77 per cent of his Bundesliga goals for Dortmund.

He strikes the ball as powerfully as anyone but is also capable of producing delicate finesse in 1v1 situations. He is blessed with outstanding natural finishing instincts.

Haaland has averaged a goal every 86 minutes during a phenomenal two-and-a-half-year spell in Germany.

In his first 18 months at Dortmund he never went longer than two league matches without a goal. His longest goalless stretch last season was five matches.

Leading the line for Pep Guardiola’s attacking side will virtually guarantee that Haaland receives a glut of quality chances.

Running in behind the defence

Haaland’s pace and movement will give Man City a new dimension.

When they use an attacking midfielder as a "false nine", City rely on slick interplay and runners from deep to exploit the spaces created.

Haaland will offer more of a direct threat. He loves to make runs beyond the last defender and is at his devastating best when there is room to surge into.

Out of his 61 Bundesliga goals, 25 have come from situations where he has run into space ahead of him to shoot, a 41 per cent share of his total output.

Under Guardiola, Man City are excellent at getting into areas where they send a stream of low crosses or passes across the face of goal.

That will suit Haaland, who has a nose for tap-ins.

While his heading ability has improved this term, he scores more regularly when getting on the end of low crosses at close range.

He makes clever movements in the box and is strong enough to brush off defenders to bundle the ball home inside the six-yard box.

Getting the best from Haaland

I doubt Guardiola will alter his successful approach completely following Haaland's arrival, but there is likely to be a tactical tweak.

This season, I'd expect to see City play a greater number of early, progressive forward passes for their signing to run on to, with the use of a "false nine" less prevalent.

Haaland is a generational talent who can take the Premier League by storm when the 2022/23 season kicks off on 6 August.

His early summer capture is a real sign of intent from the champions.