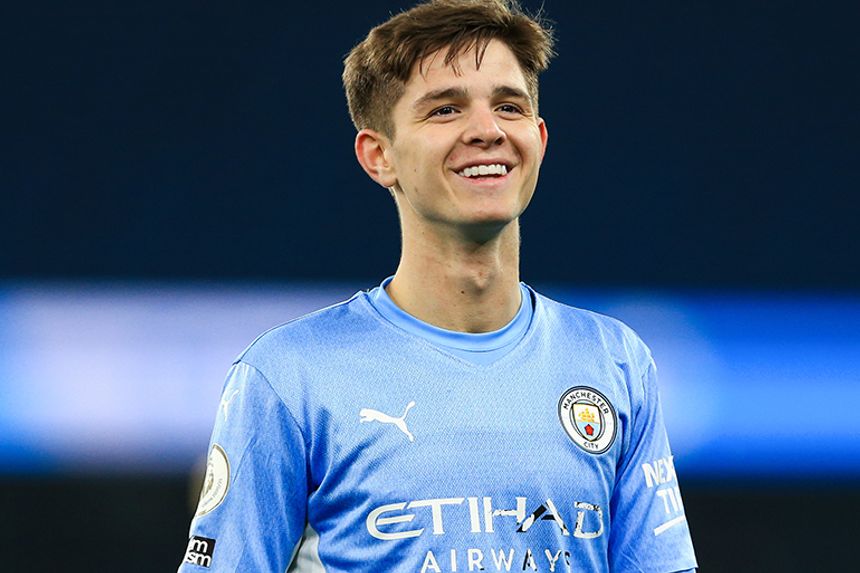 Emerging Manchester City forward James McAtee says his career has been helped by looking after his mental health, spending time with family or friends or by reaching out to speak to a team-mate.

During Mental Health Awareness Week, McAtee, who is the leading goalscorer in Premier League 2, with 18 goals and who has made a couple of appearances for the first team, has talked to the Department of Culture, Media and Sport about how having people to speak to helps how he deals with bad moments.

WATCH: @mancity’s @jamesmcatee6 talks on @DCMS Instagram about the struggles of being a professional footballer

"Obviously there's amazing parts to it but there's bad parts to it as well. You get bad comments and sometimes you just have to ignore it, but sometimes it can affect you and I think every player experiences that.

"I can always turn to my family no matter what, but I think my friends are really good for me because say I have a bad day at work or a bad game or just a down day in general, I always have my friends to go and play golf with or bowling or something like that.

"They keep my keep my mind off football if it's not going so well."

Premier League rules ensure that players at all Premier League clubs, from the Academy upwards, receive a variety of support for their mental health from their clubs and the League.

All clubs are obliged to conduct sessions with their contracted players and implement a Mental and Emotional Wellbeing Action Plan.

That work on mental health delivered by the League and partners starts from the Under-9s up to the first team.

Academy players also have access to mental health resources and support through the Premier League’s partnership with the NSPCC.

'Team-mate is not a rival'

While a player might view team-mates as rivals as they advance through an Academy, McAtee says they should rise above their competitive spirit and see those in the dressing room as a source of help because of shared experiences.

"In a football environment when you need help, you don't really want to ask anyone because everyone's in competition, and sometimes it's hard to ask your team-mate," McAtee says.

"But I would advise a young player or a new player, anyone in general really, to go and speak to a team-mate because they might have gone through the same thing you're going through."

Academy and first-team players aged over 16 such as McAtee have access to a Player App provided by the League which offers them latest news, information and advice, as well as details for support networks around mental health.

The League works with several charitable organisations, such as If U Care Share, Chasing the Stigma and Sporting Chance, at different age levels, also engaging parents and host families in some of this delivery.

A Sporting Chance player helpline is also accessible for current and former players 24/7.

Part 1: UK football family reaffirms commitment to mental health
Part 3: Lennon: I didn't realise there was so much help around
Part 4: Mertesacker: Wellbeing support is crucially important
Part 5: Mertesacker: We need to be able to express our feelings
Part 6: Premier League managers unite to tackle suicide
Part 7: Ruddy: Mental health project helps people let off steam
Part 8: Kemp: Opening up helped my mental health
Part 9: 'Saints Foundation has been a lifeline for me'